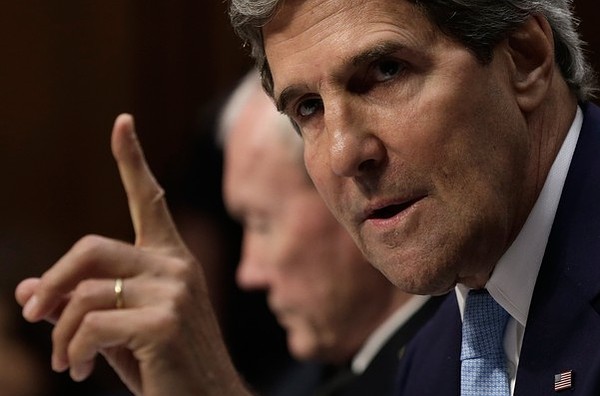 To Some, US Case For Syrian Gas Attack, Strike Has Too Many Holes

The Obama administration’s public case for attacking Syria is riddled with inconsistencies and hinges mainly on circumstantial evidence, undermining U.S. efforts this week to build support at home and abroad for a punitive strike against Bashar Assad’s regime.

The case Secretary of State John Kerry laid out last Friday contained claims that were disputed by the United Nations, inconsistent in some details with British and French intelligence reports or lacking sufficient transparency for international chemical weapons experts to accept at face value.

After the false weapons claims preceding the U.S.-led invasion of Iraq, the threshold for evidence to support intervention is exceedingly high. And while there’s little dispute that a chemical agent was used in an Aug. 21 attack outside of Damascus – and probably on a smaller scale before that – there are calls from many quarters for independent, scientific evidence to support the U.S. narrative that the Assad regime used sarin gas in an operation that killed 1,429 people, including more than 400 children.

Some of the U.S. points in question:

The Obama administration dismissed the value of a U.N. inspection team’s work by saying that the investigators arrived too late for the findings to be credible and wouldn’t provide any information the United State didn’t already have.

U.N. spokesman Farhan Haq countered that it was “rare” for such an investigation to begin within such a short time and said that “the passage of such few days does not affect the opportunities to collect valuable samples,” according to the U.N.’s website. For example, Haq added, sarin can be detected in biomedical samples for months after its use.

The U.S. claims that sarin was used in the Aug. 21 attack, citing a positive test on first responders’ hair and blood – samples “that were provided to the United States,” Kerry said on television Sunday without elaboration on the collection methods.

Experts say the evidence deteriorates over time, but that it’s simply untrue that there wouldn’t be any value in an investigation five days after an alleged attack. As a New York Times report noted, two human rights groups dispatched a forensics team to northern Iraq in 1992 and found trace evidence of sarin as well as mustard gas – four years after a chemical attack.

The U.S. assertion also was disputed in an intelligence summary the British government made public last week. “There is no immediate time limit over which environmental or physiological samples would have degraded beyond usefulness,” according to the report, which was distributed to Parliament ahead of its vote not to permit Britain to participate in any strike.

Another point of dispute is the death toll from the alleged attacks on Aug. 21. Neither Kerry’s remarks nor the unclassified version of the U.S. intelligence he referenced explained how the U.S. reached a tally of 1,429, including 426 children. The only attribution was “a preliminary government assessment.”

Anthony Cordesman, a former senior defense official who’s now with the Washington-based Center for Strategic and International Studies, took aim at the death toll discrepancies in an essay published Sunday.

He criticized Kerry as being “sandbagged into using an absurdly over-precise number” of 1,429, and noted that the number didn’t agree with either the British assessment of “at least 350 fatalities” or other Syrian opposition sources, namely the Syrian Observatory for Human Rights, which has confirmed 502 dead, including about 100 children and “tens” of rebel fighters, and has demanded that Kerry provide the names of the victims included in the U.S. tally.

“President Obama was then forced to round off the number at ‘well over 1,000 people’ – creating a mix of contradictions over the most basic facts,” Cordesman wrote. He added that the blunder was reminiscent of “the mistakes the U.S. made in preparing Secretary (Colin) Powell’s speech to the U.N. on Iraq in 2003.”

An unclassified version of a French intelligence report on Syria that was released Monday hardly cleared things up; France confirmed only 281 fatalities, though it more broadly agreed with the United States that the regime had used chemical weapons in the Aug. 21 attack.

Another eyebrow-raising administration claim was that U.S. intelligence had “collected streams of human, signals and geospatial intelligence” that showed the regime preparing for an attack three days before the event. The U.S. assessment says regime personnel were in an area known to be used to “mix chemical weapons, including sarin,” and that regime forces prepared for the Aug. 21 attack by putting on gas masks.

That claim raises two questions: Why didn’t the U.S. warn rebels about the impending attack and save hundreds of lives? And why did the administration keep mum about the suspicious activity when on at least one previous occasion U.S. officials have raised an international fuss when they observed similar actions?

On Dec. 3, 2012, after U.S. officials said they detected Syria mixing ingredients for chemical weapons, President Barack Obama repeated his warning to Assad that the use of such arms would be an unacceptable breach of the red line he’d imposed that summer. Then-Secretary of State Hillary Clinton chimed in, and the United Nations withdrew all nonessential staff from Syria.

Last month’s suspicious activity, however, wasn’t raised publicly until after the deadly attack. And Syrian opposition figures say the rebels weren’t warned in advance in order to protect civilians in the area.

“When I read the administration’s memo, it was very compelling, but they knew three days before the attack and never alerted anyone in the area,” said Radwan Ziadeh, a Syrian opposition activist who runs the Washington-based Syrian Center for Political and Strategic Studies. “Everyone was watching this evidence but didn’t take any action?”

Among chemical weapons experts and other analysts who’ve closely studied the Syrian battlefield, the main reservation about the U.S. claims is that there’s no understanding of the methodology behind the intelligence-gathering. They say that the evidence presented points to the use of some type of chemical agent, but say that there are still questions as to how the evidence was collected, the integrity of the chain of custody of such samples, and which laboratories were involved.

Eliot Higgins, a British chronicler of the Syrian civil war who writes the Brown Moses blog, a widely cited repository of information on the weapons observed on the Syrian battlefield, wrote a detailed post Monday listing photographs and videos that would seem to support U.S. claims that the Assad regime has possession of munitions that could be used to deliver chemical weapons. But he wouldn’t make the leap.

Holes in the case already have allowed Russia to dismiss the U.S. evidence as “inconclusive,” with Foreign Minister Sergey Lavrov saying in a speech Monday that Moscow was shown “some sketches, but there was nothing concrete, no geographical coordinates, or details…and no proof the test was done by professionals,” according to the state-backed RT news agency.

“When we ask for further clarification, we receive the following response: ‘you are aware that this is classified information, therefore we cannot show it to you,’” Lavrov said. “So there are still no facts.”

Lavrov’s remarks signaled that Russia, one of the last Assad allies, was nowhere near being convinced enough stop its repeated blocking of U.N. Security Council resolutions targeting the regime.

But there’s also skepticism among U.S.-friendly nations, such as Jordan, which declined to endorse action until it studies the findings of a U.N. chemical weapons investigation, and the United Kingdom, where Parliament voted against intervention even before the U.S. released an intelligence assessment that contradicted one released a day before by British authorities.

It’s unclear how much a factor the evidence was in Parliament’s decisions; there’s also a high degree of wariness of any U.S.-led intervention after the Iraq experience.

The U.S. did get a boost Monday from the commander of NATO, Anders Fogh Rasmussen, who told a news conference he’d seen “concrete information” that convinced him of the Assad regime’s responsibility for an apparent chemical attack that killed hundreds of people in August.

Rasmussen said it would send a “dangerous signal to dictators” if the world didn’t respond, but he left it up to NATO nations to decide their own responses and didn’t advocate action beyond protecting member state Turkey, which borders Syria.

U.S. allies across the Arab world and Europe have said they prefer delaying any potential military strikes until after the U.N. inspection team releases its findings. The U.N. mandate is to determine whether chemical weapons were used, but not to assign culpability. U.N. officials have said they’re trying to expedite the inspection team’s work while protecting the integrity of the process.