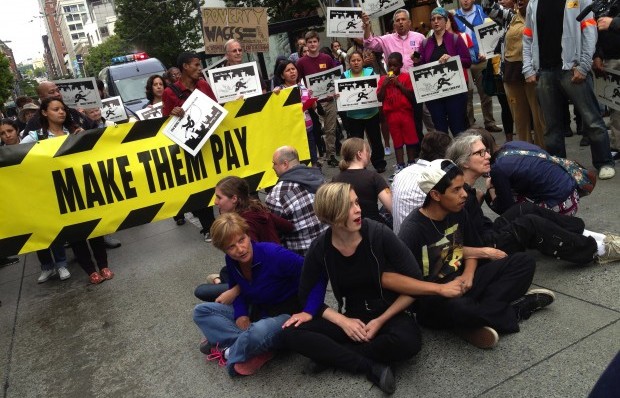 Three years ago, I waited tables at a diner in Jackson, Mississippi. The minimum-wage job was one of four part-time jobs I held at the time, all of which were necessary to pay my rent, keep my lights on, have heat in the dead of winter, and keep my car in decent shape. Tips at the restaurant were placed in a bucket by the cash register, and the bucket was divvied up among all the servers and cooks at the end of the day. But before the tips were distributed, the co-owners of the restaurant would retreat to their back office for “bookkeeping,” and the bucket of tips would suddenly be much lighter. After a full day of waiting tables, I would only go home with a little over $30 in tips. If one of the owners caught a server pocketing a tip from a customer who wanted to tip a server directly, we would be forced to put it in the bucket, which we knew would be skimmed. But my experience is just one example of the situation for millions of restaurant workers in America today.

All of America’s burglars, convenience store robbers, carjackers, muggers, and bank robbers combined don’t steal even half as much money as America’s top restaurant chains steal from their workers in a given year. According to the Economic Policy Institute, the U.S. Department of Labor had to recover $280 million in wages held by employers in 2012. That same year, the Department of Justice said the total amount of money stolen in robberies was $139 million. But since criminal restaurant chain executives aren’t being carted off to jail for their acts of robbery, restaurant workers will shut down their businesses by any means necessary this Thursday – including committing acts of civil disobedience.

The New York Times has reported on the rise of wage theft, in which low-wage workers across all sectors are forced to work long hours, for 6 or 7 days a week, while having their federally-mandated time-and-a-half overtime pay withheld by their employer. A California judge recently ruled that FedEx violated wage theft laws by denying overtime pay to drivers that FedEx classified as “independent contractors.” FedEx, a global, multi-billion dollar company that often pays an effective tax rate in the single digits, is appealing the ruling. And 41 supermarket janitors in Fremont, California had over $330,000 in back pay withheld by their employers, who made employees sign off on blank time sheets in an effort to pay them for fewer hours than they actually worked.

40 percent of restaurant workers live in poverty, despite the restaurant industry’s growing revenues by30 percent over the past 20 years. The federal minimum wage for servers has been locked at a little over $2 an hour since the 1990s, thanks to an agreement that Congress entered into with the National Restaurant Association lobby when it was headed by Herman Cain. The pizza magnate had fiercely opposed any increase in the federal minimum wage, but agreed to not lobby against further increases if Congress kept the minimum wage for tipped workers at a paltry $2.13 an hour. This means that even well-tipped servers are barely making ends meet on their current salaries.

The key demand of the nationwide strikes on Thursday will be $15 an hour. Seattle has already passed a $15 an hour minimum wage ordinance, after a year of workers shutting down restaurants and Socialist city council member Kshama Sawant’s proposal to Seattle’s governing body. Last year, striking workers in Chicago pointed out that if the federal minimum wage had kept up with worker productivity, the minimum wage would be $22 an hour. Senator Elizabeth Warren has also endorsed that same figure. Workers are reasoning that $15 an hour and the right to organize a union is a reasonable proposal for billion-dollar restaurant chains to meet workers halfway.

Robert Reich’s documentary “Inequality for All” compared several charts showing that workers’ wages and productivity climbed at even rates until the 1980s, when Ronald Reagan began busting the air traffic controllers’ union. As unions continued their decline from the Reagan years to the present day, worker productivity and corporate profits continued their steady uptick while workers’ wages stagnated. Today, it’s no coincidence that the U.S. has the world’s 4th highest rate of income inequality, while many states have curbed union organizing rights altogether or severely crippled their ability to organize new workers. And while U.S. inequality as a whole is terribly high, with CEOs making 280 times what their average worker makes, it’s even worse in the restaurant industry – the average restaurant CEO makes 721 times what his average employee makes.

Thursday’s strikes will be made up of not only fast food workers, but home care workers as well. The Supreme Court recently ruled that home healthcare providers are effectively “right-to-work” employees, greatly weakening their unions by not requiring that workers pay dues for their union to collectively bargain on their behalf. Low wage workers in the fast food and retail industries argue that a union is necessary to protect them from predatory employers who don’t pay overtime, skim workers’ tips, and threaten retaliation against workers who speak out against low wages and poor working conditions.

And contrary to what wealthy CEOs want you to believe, a higher minimum wage is actually beneficial to economies. In San Jose, California, the minimum wage went up from $8.00 to $10.15. UC Berkeley economist Michael Reich found that the unemployment rate has dropped from 7.4 percent to 5.4 percentsince March of 2013, and the number of new restaurants in San Jose is up 20 percent in the last year and a half. While restaurant owners have had to increase prices by roughly 1 percent as a result of the wage hike, most of their customers don’t even notice. By contrast, the restaurant in Mississippi where I worked for a paltry minimum wage and routinely had my tips stolen by the owners has since gone out of business.

President Obama has even called for an increase in the minimum wage and equal pay for women in the workplace. If restaurant workers show up every day to put food on our tables, we should support their fight to be able to put food on their own tables.

Carl Gibson, 27, is co-founder of US Uncut, a nonviolent grassroots movement that mobilized thousands to protest corporate tax dodging and budget cuts in the months leading up to Occupy Wall Street. Carl and other US Uncut activists are featured in the documentary We’re Not Broke, which premiered at the 2012 Sundance Film Festival. Carl is also the author of How to Oust a Congressman, an instructional manual on getting rid of corrupt members of Congress and state legislatures based on his experience in the 2012 elections in New Hampshire. He lives in Sacramento, California.