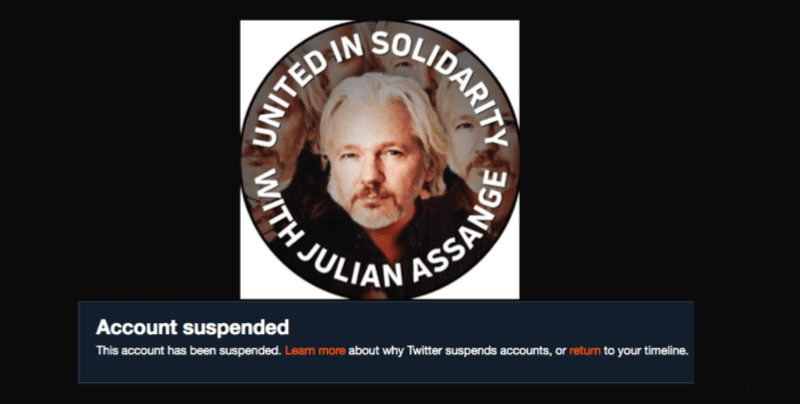 One of the biggest Twitter accounts dedicated to circulating information and advocacy for WikiLeaks founder Julian Assange, @Unity4J, has been completely removed from the site. The operators of the account report that they have been given no reason for its removal by the Twitter staff, and have received no response to their appeals.

Any Assange supporter active on Twitter will be familiar with the Unity4J account, which originated to help boost the wildly successful Unity4J online vigils in which well-known Assange defenders would appear to speak out against his persecution. As of this writing, the account has been gone for a day and a half.

“About 8:45 am CST on Thursday, July 11, one of our Unity4J Twitter team members went to retweet on the account and noticed that the account was no longer accessible,” reports pro-Assange activist Christy Dopf, one of the operators of the account. “When each of us also attempted to access the account we all received the same message ‘Account Suspended’. Twitter did not send us a reason or violation for the suspension. So an appeal was submitted. We did receive correspondence that Twitter got our request and the case is currently open. Unfortunately, we do not have a timeline on how long this could take.”

Speaking for myself as a vocal Assange supporter on Twitter, I can say that I’ve been following the @Unity4J account closely since its earliest days and I’ve never once seen it post anything other than highly professional-looking advocacy for Julian Assange. I’ve certainly never seen it post anything that could be construed as abusive, misleading, or otherwise in violation of any of Twitter’s posted rules.

The main Twitter account defending Julian Assange, and therefore press freedom & freedom of speech, has been suspended.@Unity4J – suspended for defending a hero.#Unity4J

This account’s deletion is just the latest in a long string of apparently biased actions against WikiLeaks and Assange by the immensely influential social media platform. That bias was made abundantly clear with Twitter’s ridiculous refusal to verify Assange while he was posting from his own account despite his undeniably being a significant public figure, and despite the fact that Twitter was well aware that the account was authentic. The platform has been receiving consistent complaints among Assange supporters of using shadow bans to marginalize their voices, as well as unfair posting locks and restrictions.

“It seems that Assange supporters have been targeted for suspension over the last few days and weeks, including the suspension of individuals (Yon Solitary, Monique Jolie) as well as accounts like Unity4J,” Unity4J co-founder Elizabeth Lea Vos told me today. “All of these suspensions are unacceptable, but I find the Unity4J suspension especially egregious because it was an amplifier of events across the board, not only actions run by Unity4J. It never broke the twitter rules and it was an activist account supporting a journalist who’s been silenced or ‘disappeared,’ so this suspension is an extension of that suppression. Assange asked us to become his voice, and platforms like Twitter appear to be actively working against the possibility of that effort.”

Pro-Assange activists have been speaking out on Twitter against @Unity4J’s removal.

“I have no doubt that @Unity4J’s twitter account was suspended because it was a hub of useful information on solidarity events and actions in support of Assange, WikiLeaks, Chelsea Manning and more. Horrendous censorship to suspend the account, @TwitterSupport,” tweeted Elizabeth Lea Vos.

“If @Unity4J is not restored, it is proof that Twitter would have sided against the Free Mandela movement, and every other mass liberation movement of a ‘terrorist’ turned Nobel nominee,” tweeted Unity4J co-founder Suzie Dawson.

Its a central point for updates, interviews & actions re my son politically persecuted journalist JULIAN ASSANGE!

Many other Assange supporters have been flagging the attention of the Twitter Support account and Twitter CEO Jack Dorsey objecting to the unjust silencing of a perfectly legitimate activist account, to no avail thus far.

The censorship of political speech on online media platforms is a large and growing problem. Twitter has been better about this than the far more sycophantic Facebook and Google, but the discrimination against anti-establishment political speech is undeniable at this point. I myself was removed from the platform last year just for saying the world would be better off without warmongering US Senator John McCain in it, and was only restored after protests from high-profile Twitter users.

In a corporatist system of government, in which there is no meaningful separation of corporate power and state power, corporate censorship is state censorship. With giant Silicon Valley corporations aligning themselves with shady state-funded propagandistic think tanks like the Atlantic Council, being admonished on the Senate floor that they must help quash political rebellion, and being targeted for narrative control influence by the US military, there’s vanishingly little difference between what’s happening more and more to political speech with these tech giants and what happens in overtly totalitarian governments. The only difference is the stories people choose to tell themselves about it.

The time to speak up about this silencing is now. Your voice is next.