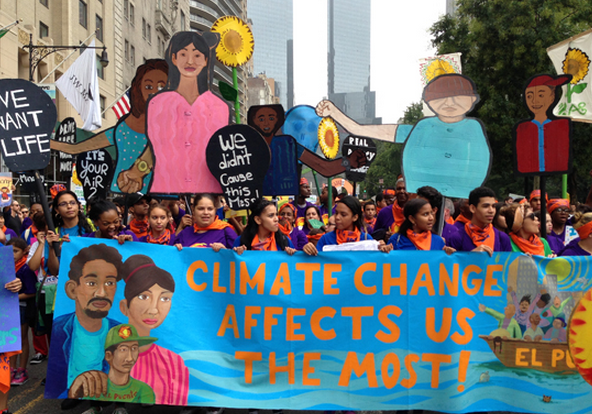 There is a lot to feel good about as far as the U.S. climate movement and what we accomplished in 2014. Without question, we are heading into 2015 with some wind at our back and, to continue the relevant metaphor, the sun to light our way forward.

In the order that I think were most important, here they are:

1. People’s Climate March, Sept. 21: How could anything else be more important than this? Hundreds of thousands of people demonstrated in New York City for action on climate, with many tens of thousands more around the U.S. and the world doing so in solidarity. Scores of constituencies were represented, from famous people to U.S. Senators to communities of color to trade unionists to a multi-faith religious contingent to tens of thousands of youth and so many more. Nearly everyone involved had positive things to say about it afterwards. And the next day, thousands took nonviolent direct action as part of Flood Wall Street.

2. Renewable Energy Growth: Wind and solar energy, in particular, just keep growing and growing. An analysis put out by Federal Energy Regulatory Commission (FERC) right before Christmas reported that newly installed solar and wind electrical generating capacity increased between January – November 2013 and January – November 2014 from 4,166 megawatts (MW) to 4,728 MW, while new capacity for natural gas fell from 6,674 MW in 2013 to 5,513 MW in 2014 and coal fell from 1,543 MW to 106 MW. These figures are illustrative of what has been happening for several years in the U.S., and the percentage of new renewables worldwide is even better, more like 70-80 percent of all new electrical generating capacity.

3. New York Bans Fracking: What a great end-of-year development, brought about without question because of the strength of the popular movement against fracking throughout the state. From the close-to-200 local town, city and county resolutions and ordinances against fracking, to the year-after-year birddogging of Governor Cuomo, to the anti-fracking uprising at the Democratic Party primary ballot box this September, New Yorkers showed that there “ain’t no power like the power of the people,” if it is organized, visible and active.

4. Fighting Fracking Infrastructure and Gas Exports at Cove Point and Beyond: 2014 was the year that the growing movement against the expansion of fracked gas infrastructure from New England down to Georgia and beyond, from gas pipelines to compressor stations to export terminals, burst onto the national scene. The proposed Cove Point, Md. export terminal 50 miles from the White House—one of about 20 proposed export terminals—became a focal point for this movement. Though FERC granted Dominion Power a permit, it is under appeal and will end up in federal court, and the movement against it and all of the other fracking infrastructure is gaining in strength.

5. Still No Keystone XL Pipeline: Thanks to the on-going and consistent work of a coalition of Indigenous, farmer-and-rancher and environmental groups and the increasingly-challenging economics of tar sands oil extraction, it is looking less and less likely that the Keystone XL tar sands pipeline is ever going to be built. And ditto for other from-Alberta pipelines. The “new CIA,” the Cowboy-Indian Alliance, held a politically powerful week of action in Washington, DC, and continued to work together afterwards in the nation’s heartland.

6. And Still No West Coast Coal Exports:  In the words of climatesolutions.org, “Stopping any new coal export off the West Coast continues to be a major stake in the ground for the climate movement. Our Power Past Coal coalition campaign has made major advances in the past year, with two proposals pulled off the table in Oregon, and the Washington Dept. of Ecology announcing a broad scope of review for the impacts of the proposed coal export terminal at Cherry Point north of Bellingham, Washington. Now with three export proposals off the table, we continue to watchdog the remaining three proposals and partner with community leaders to build a powerful constituency for building a better, more prosperous future in the region.”

7. Seneca Lake Gas Storage: 170 Arrests and Counting: Since the beginning of November, We Are Seneca Lake has mounted a campaign of nonviolent civil disobedience, built upon widespread community support, that is an inspiring and instructive model for our entire movement. Every week, sometimes more than once, groups of people have been arrested blocking the road into the Crestwood Gas Storage Facility, building political pressure to stop their dangerous plans which could contaminate the drinking water supply for 100,000 people. There are no indications that the new year is going to slow this movement down.

8. Beyond Extreme Energy Shines a Spotlight on FERC: During the first week of November, for five straight days, close to 200 people blockaded the entrances to the DC headquarters of the FERC. Seventy people were arrested. FERC is the agency which rubber stamps permits for the gas industry to expand fracking infrastructure, including proposed gas export terminals. Every morning FERC employees felt the determination of the no-fracking movement, and FERC could not have been happy about the press coverage the actions received. In 2014, FERC became much more well-known, and not for doing good things.

9. Great March for Climate Action: From March to November, a core group of about 35 people, joined by thousands of others for a day or for weeks, walked from Los Angeles, California to Washington, DC calling for action at the scale of the climate crisis. Probably millions of people heard about this heroic action. They modeled the level of commitment needed if we are to turn things around in enough time to prevent climate catastrophe worldwide.

10. Good Climate Legislation Introduced in Congress: And last but not least, House Democratic leader Congressman Chris Van Hollen (D-Md.) introduced legislationin late July to put a price on carbon via a steadily-declining-cap on carbon emissions, with 100 percent of the money to be returned to U.S. families. Since endorsed by 14 other House members, 33 progressive organizations, the Baltimore Sun and the Washington Post and to be reintroduced in the new Congress, this legislation offers a rallying point for our movement in 2015.

As 2014 ends, there is reason to believe that we may be in the midst of the political tipping point time period our world desperately needs. Let’s make 2015 the year that everyone, from the grassroots up to the political pundits and even the fossil fuel executives, realizes that we are too broad, too deep, too big, too determined, too willing to sacrifice and too smart to be turned aside.