Tosepan: Resistance And Renewal In Mexico

Above Photo: A mural in Cuetzalan, Puebla, depicting the life of abundance that Tosepan seeks to uphold. Photo by Alex Jensen.

Since the mid-1980s, Mexico has been a poster child for globalization. Through free trade treaties and structural adjustment policies imposed by international financial institutions, the country has been “liberalized” – opened up to unfettered corporate investment and imports – to an extent matched by few other countries. Though the North American Free Trade Agreement (NAFTA) is the most well-known trade treaty to affect Mexico, it is but the first and largest of numerous multilateral and bilateral agreements that make Mexico the world’s free trade agreement (FTA) leader. All told, Mexico has signed 12 free trade agreements with 44 nations, 28 bilateral investment treaties, and 9 agreements of economic cooperation.[1]

The grim consequences of globalization in Mexico are by now familiar. NAFTA threw the doors open to heavily subsidized US agribusiness products – especially corn – which subsequently flooded into the country. Imports increased three-fold, and the price of corn dropped 50 percent, devastating the rural economy and forcing some 4.9 million campesinos (peasants) out of farming altogether, precipitating their mass migration from the countryside to cities (and to the US) in order to survive.[2]

NAFTA also exposed the Mexican economy to retail and fast-food multinationals based in the US, besieging the country with an avalanche of junk foods and soft drinks high in fat, salt, and sugar, and an attendant epidemic of deadly “diet-related diseases” – e.g. hypertension, diabetes, and obesity (these would be more accurately termed “corporate globalization-related diseases”).[3] 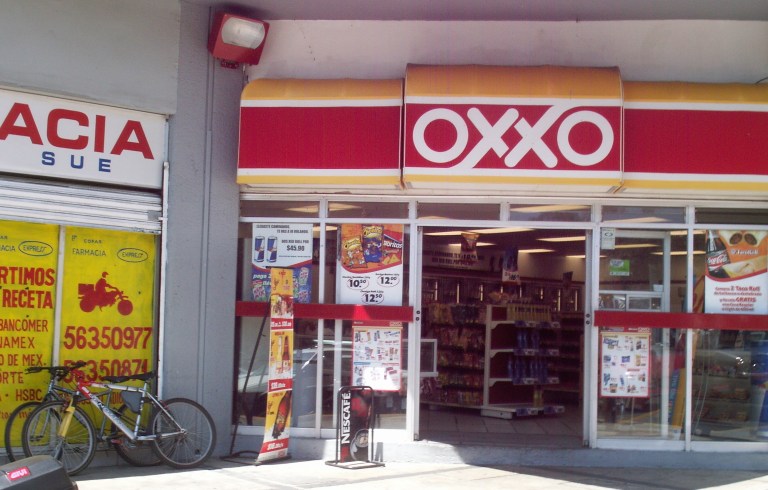 The liberalization regime has also fueled a veritable bonanza for extractive industries – from mining and fossil fuels to big dams and mega-infrastructure developments. Transnational companies – with the blessing of state and national governments – have been scouring the country, extracting its natural wealth and concentrating the benefits in fewer and fewer corporate hands (the richest 1 percent in Mexico owns over half of the country’s wealth).[4] Consequently, Mexico hosts over 500 ongoing environmental conflicts – one of the highest counts in the world today.[5] Defenders of the environment are targeted with violent reprisals by those pushing destructive development. Global Witness reports that 15 environmental defenders were killed in Mexico in 2017, up from 3 in 2016.[6]

It is hard to find much hope amidst this desperate situation, and yet, throughout Mexico, there is a florescence of inspiring resistance and alternatives, some long-established, some only now springing up. In the southern state of Puebla, the lush, cloud-forested Sierra Norte mountains bordering Veracruz are home to one of the oldest and most inspiring of these movements of “the other Mexico” or México profundo[7]: the Unión de Cooperativas Tosepan (Also known as Tosepan Titataniske, meaning “United We Will Overcome”, in Náhuatl).

In Puebla, local communities defending their territories and lifeways are confronting corporate-state development projects, including mining, gas fracking, centralized electrical grid infrastructure, big dams, and big box stores. According to the EJ Atlas, concessions have been granted in Puebla for 11 mines and 14 hydroelectric projects, along with petroleum development (including fracking).[8]

But there has been a fierce backlash across the state, successfully blocking many of these projects. In the Sierra Norte, the resistance has been particularly spirited and effective, causing a number of hydropower projects to be suspended, and a planned Walmart (under its Mexican subsidiary name, Bodega Aurrerá) to be scuppered.

Some of the most effective resistance has emanated from a network of cooperatives called Tosepan that has been working in the region for 40 years, building up a parallel solidarity economy among largely Nahua and Tutunaku indigenous communities, encompassing some 35,000 members across 430 villages in 29 municipalities. Tosepan was instrumental in encouraging a citizen’s plebiscite to reject the incursion of a Walmart/Bodega Aurrerá store in the town of Cuetzalan in 2010, by using arguments about the economic, cultural and environmental harms it would cause.[9] An analysis was done showing that Walmart’s promised 60 low-quality jobs would come at the cost of 500 local businesses, and put at risk the entire solidarity economy built up by Tosepan and others, based on ancestral indigenous practices.[10] The significance of this victory cannot be overstated in a country where Walmart has steadily been taking over and dominating the economy (1 in 5 Walmart stores worldwide are in Mexico, destroying local livelihoods and spreading a culture of consumption, disposability, and waste).[11] 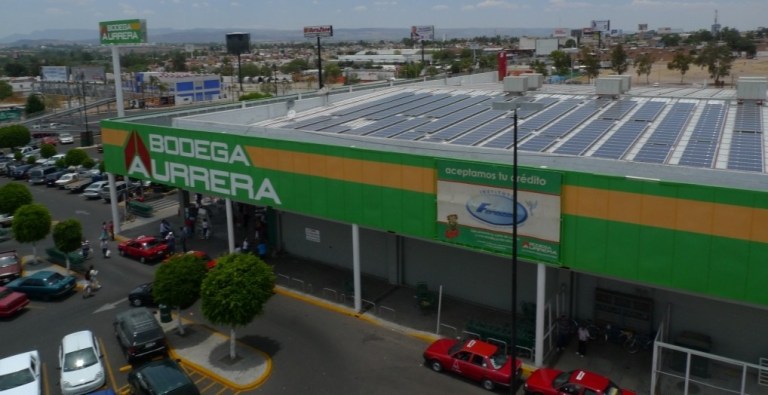 A Bodega Aurrerá (a subsidiary of Walmart) in Aguascalientes, Mexico – a landscape and lifestyle that Tosepan successfully rejected.

All of these struggles of resistance help to uphold the main work of Tosepan: constructing a holistic, sustainable, locally and democratically controlled economy rooted in the indigenous culture and knowledge of the Sierra Norte – a source of dignified livelihoods and ecological security, and a viable alternative to the distress-migration suffered by so many other communities.

As one of Tosepan’s members, María Luisa Albores, explained in a 2016 article in La Jornada del Campo: “The history of Tosepan is completely tied to its mission and reason for being, adhered to up until today: ‘Improve the quality of life of the families of the members (of the cooperative), through work organized to advance towards the construction of a project of ‘vida buena’.” [12] 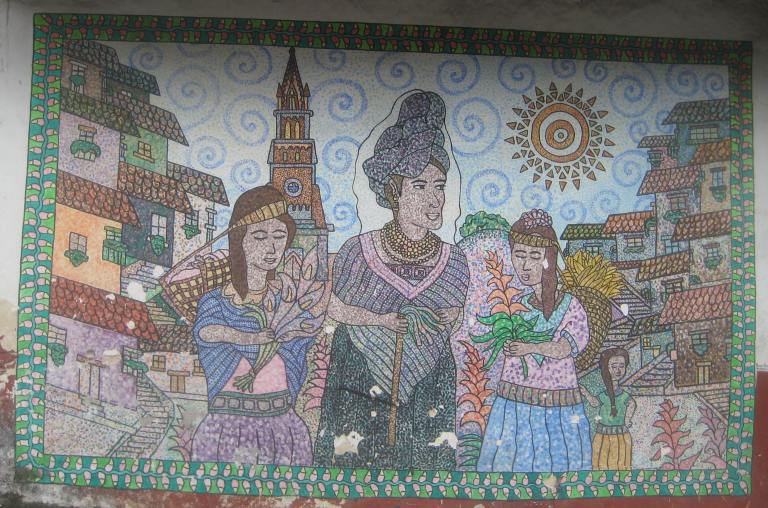 A mural in Cuetzalan, Puebla, depicting the life of abundance that Tosepan seeks to uphold. Photo by Alex Jensen.

Tosepan is comprised of three civil associations and eight cooperatives, which together cover basic needs. These include: organic agroecological farming of staples like corn, beans and vegetables, as well as crops like coffee, pepper, and sugarcane, both for sale (primarily to local markets) and for the community’s subsistence; small-scale, community-based eco-tourism; natural building using local resources like bamboo and adobe, incorporating features like water harvesting, solar dehydrators, ecological cookstoves, and renewable energy; local health-care, focusing on prevention and traditional herbal remedies; decentralized renewable energy with a goal of total energy sovereignty; and local finance to support the functioning of the entire ecosystem of cooperatives (Tosepan has its own cooperative bank, called “Tosepantomin”, meaning “money of all”/“everyone’s money”, in Nahuatl).[13]

Since 2001, Tosepan’s members have been involved in organic coffee production based on highly diversified, biologically rich agroecological “gardens of coffee” that are possibly the most diversified coffee farms in Mexico. A single hectare may contain over 200 species of plants, with multiple ecological and social functions and values (ritual, medicinal, fuel, food for family consumption, non-timber forest products for trade, etc.).

Since 2014 there has been a special emphasis on food sovereignty in Tosepan, with the goal of meeting local needs first. Some of the activities towards this end have included:

Beginning in 2003, one of Tosepan’s signature efforts has been to bring back the native bee Scaptotrigona Mexicana, known in the region as pisilnekmej. This bee was domesticated in pre-colonial times, and the unique system of two-tiered clay pot hives has been maintained since then. The bees’ honey, propolis, and wax have many medicinal properties, while the pollen is rich in proteins. The cooperative also makes products like shampoos, soaps and creams from the honey and wax. 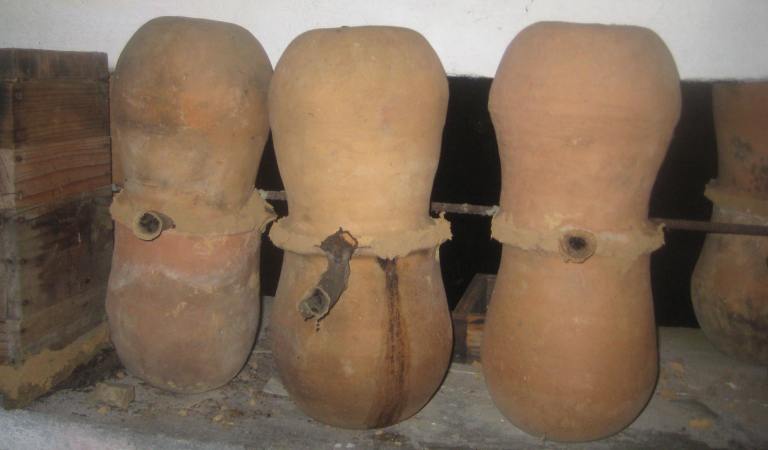 Albores explains the ethos guiding Tosepan’s work: “Our cooperative model is based in values of a cosmovision or form of life that closely coincides with the social and solidarity economy which values life, people, the land, plants, and animals. From this vision we have constructed the mode of life of Tosepan…. The sense of belonging and permanence in our territory gives us identity…in the face of the onslaught and displacements of the capitalist system. Here we are and will continue with dignity, on foot walking in our land, which is sacred.”

The capitalist system‘s relentless need to expand and grow continues to pose a threat, and Tosepan has not been spared the violence that the global economy inflicts on local people standing in its way. Some of its leaders have been murdered and others have narrowly escaped attempts on their lives by mercenaries in the pay of industry.[14] Violence and physical intimidation, it seems, continue to be favored tools of plunderers who have otherwise been blocked by well-organized communities deeply committed to defense of their homes.

This is one of the signal lessons of the inspiring work of Tosepan: that a culture of solidarity — fortified by cooperative(s) providing for material and cultural needs — deepens democracy, and that this in turn makes it very hard for predatory capital to enter. However inspiring and admirable, though, the corporate free-trade regime bearing down on Mexico continues to hover menacingly in the background, posing a constant threat to any initiatives in local self-reliance, ecological security, dignity, and renewal. Thus the need to confront and dismantle this regime is still paramount, to enable many more Tosepans to emerge and succeed.

[6] At What Cost? Irresponsible business and the murder of land and environmental defenders”, Global Witness, 2018, https://www.globalwitness.org/documents/19392/Defenders_report_layout_AW2_lowres.pdf

[14] Bien, Ethan, “An Indigenous Cooperative is Dodging Bullets to Defend Their Land”, In These Times, June 21, 2018, https://inthesetimes.com/article/21190/Mexico-environmentalists-indigenous-attacked