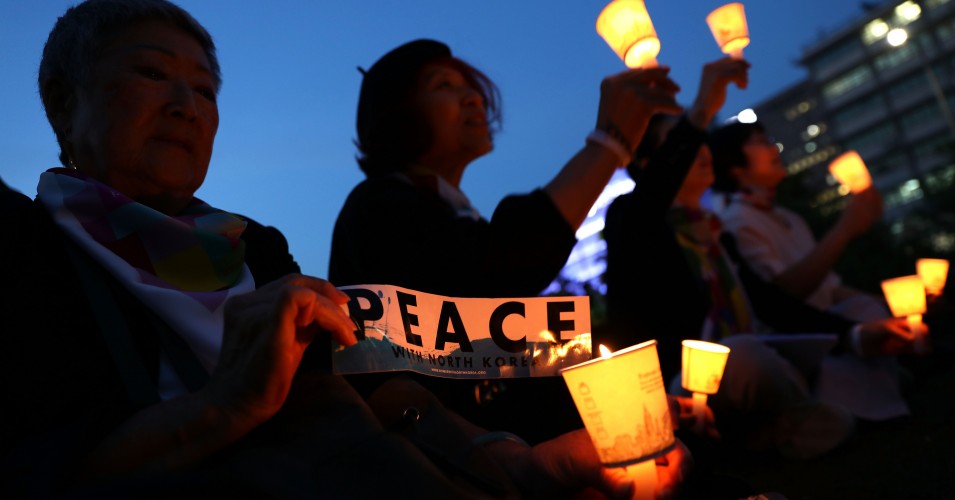 Toward A Truly Indigenous Peace In The Korean Peninsula

Above Photo: Activists gather in front of the U.S. embassy to demand peace for the Korean peninsula after the cancellation of the U.S. and North Korea summit on May 25, 2018 in Seoul, South Korea. (Photo by Chung Sung-Jun/Getty Images)

It’s time that American politicians, both Democratic and Republicans, give Koreans a chance to shape their own destiny.

It was my first visit to my native Korea in over 3 years.  Everywhere I went, I witnessed the afterglow of the inspiring candlelight movement that restored democracy to the country, and sensed the deep conviction with which Koreans support the current peace process initiated by President Moon.

Our delegation noted in one of its first official statements following its arrival in Korea: “What initiated the Panmunjom Declaration was the completely non-violent and peaceful civil revolution in 2016 that began with orderly marches of demonstration with warm candlelight through the winter.  The candlelight revolution was a true example of the UN’s Culture of Peace.”

In addition to meeting with diplomatic representatives from the US, U.K, Japan, Sweden, and Canada, we participated in an all-day peace symposium at the National Assembly side by side with South Korean women peace activists. One of our South Korea colleagues commented that while women have been conspicuously absent from the process of warmaking in the Korean peninsula (at least from a policy standpoint) they most certainly ought to be part of the peace process.

On the same day that President Moon and Chairman Kim held their second summit in Panmunjom, our delegation, accompanied by over 1200 Korean women, walked over 5 km in the sweltering 40-degree heat to cross the Unification Bridge on foot. Christine Ahn summed up all our sentiments when she later commented:

“We were the first civilians to walk across the Unification Bridge.  As I took my first step onto the bridge, tears streamed down my face as I thought about how Korea was divided by the US and the former Soviet Union after 35 years of Japanese colonial occupation.”

This disregard for the interests of Koreans themselves in this nominally inter-Korean conflict was a declaration authored by seven leading Democratic Senators, demand that President Trump to hold to a hard line in any negotiations with North Korea. The letter signed by Senators Mendendez, Schumer, Durbin, Warner, Feinstein, Leahy and Brown completely overlooked the recent progress toward peace evinced by the inter-Korean summit and the Panmunjom Declaration, and discounted the overwhelming support for the current peace process by Koreans. Further, it was oblivious to the hopes and interests of 80 million Koreans who, after surviving 35 years of brutal Japanese colonization, were forcibly divided over 65 years ago by the US and the former Soviet Union. The letter offers no alternative vision for peace on the Korean Peninsula and considers Korean interests only insofar as they serve the narrow political agenda of the Democratic party. It represents a bankrupt foreign policy view.

On the occasion of our delegation’s visit to Korea, I had reached out to renowned scholar Professor Noam Chomsky, with whom I maintain a correspondence, for a statement in support of our mission. Contrasting the significance of the April 27 Declaration between the two Koreas with the apparently incoherent foreign policy approach of the United States, which plays a dominant role in any prospect for inter-Korean peace, Professor Chomsky commented:

The April 27 Declaration of the two Koreas was a historic event, which promises a bright future for the people of Korea.  It calls for the two Koreas to settle their problems “on their own accord” and lays out a careful schedule to proceed, something quite new.  It also calls on the international community (meaning Washington) to support this process.  Unfortunately, the signals from Washington are at best mixed.  National Security Council advisor John Bolton, who has called for bombing North Korea at once, and Vice-President Mike Pence both invoked the “Libya model,” knowing full well its import.  President Trump cancelled the Singapore summit a few hours after North Korea had destroyed its main testing site as an important gesture of conciliation.  But these are pitfalls, not termination of the process.  With determination and good will the two Koreas can move forward with the plans outlined in the Declaration.  It is the task of the people of the United States to support them in this historic endeavor and to ensure that their own government does not undermine or in any way impede the process.  That can succeed.  It must succeed, for the welfare of Korea, and all of us.

Professor Chomsky is right in pointing out that this initiative carried forward by the two Koreas is in fact “something quite new.”  The minimum that the United States can do during this historic moment is to refrain from harming the inter-Korean peace process. It’s time that American politicians, both Democratic and Republicans, give Koreans a chance to shape their own destiny.