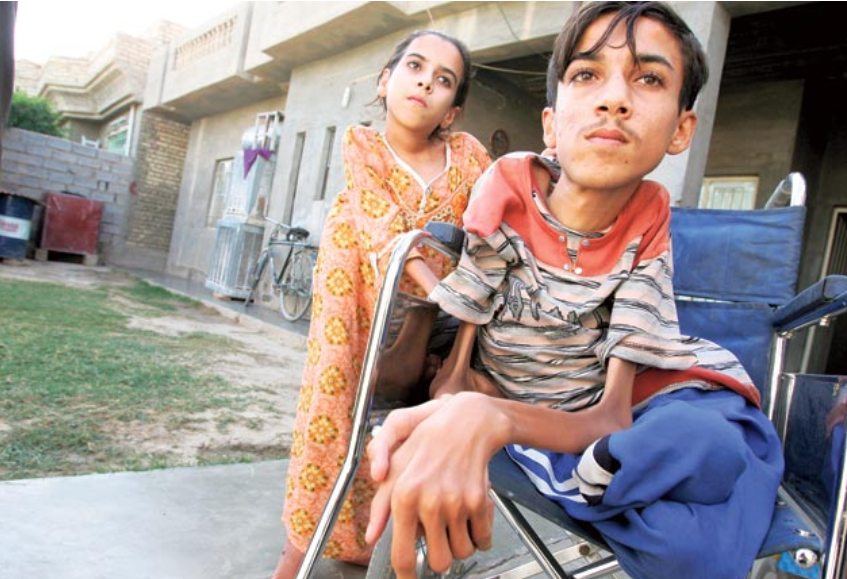 Toxic Legacy Of US Assault On Fallujah ‘Worse Than Hiroshima’

Dramatic increases in infant mortality, cancer and leukaemia in the Iraqi city of Fallujah, which was bombarded by US Marines in 2004, exceed those reported by survivors of the atomic bombs that were dropped on Hiroshima and Nagasaki in 1945, according to a new study.

Iraqi doctors in Fallujah have complained since 2005 of being overwhelmed by the number of babies with serious birth defects, ranging from a girl born with two heads to paralysis of the lower limbs. They said they were also seeing far more cancers than they did before the battle for Fallujah between US troops and insurgents.

Dr Chris Busby, a visiting professor at the University of Ulster and one of the authors of the survey of 4,800 individuals in Fallujah, said it is difficult to pin down the exact cause of the cancers and birth defects. He added that “to produce an effect like this, some very major mutagenic exposure must have occurred in 2004 when the attacks happened”.

US Marines first besieged and bombarded Fallujah, 30 miles west of Baghdad, in April 2004 after four employees of the American security company Blackwater were killed and their bodies burned. After an eight-month stand-off, the Marines stormed the city in November using artillery and aerial bombing against rebel positions. US forces later admitted that they had employed white phosphorus as well as other munitions.

In the assault US commanders largely treated Fallujah as a free-fire zone to try to reduce casualties among their own troops. British officers were appalled by the lack of concern for civilian casualties. “During preparatory operations in the November 2004 Fallujah clearance operation, on one night over 40 155mm artillery rounds were fired into a small sector of the city,” recalled Brigadier Nigel Aylwin-Foster, a British commander serving with the American forces in Baghdad.

He added that the US commander who ordered this devastating use of firepower did not consider it significant enough to mention it in his daily report to the US general in command. Dr Busby says that while he cannot identify the type of armaments used by the Marines, the extent of genetic damage suffered by inhabitants suggests the use of uranium in some form. He said: “My guess is that they used a new weapon against buildings to break through walls and kill those inside.”

The survey was carried out by a team of 11 researchers in January and February this year who visited 711 houses in Fallujah. A questionnaire was filled in by householders giving details of cancers, birth outcomes and infant mortality. Hitherto the Iraqi government has been loath to respond to complaints from civilians about damage to their health during military operations.

Researchers were initially regarded with some suspicion by locals, particularly after a Baghdad television station broadcast a report saying a survey was being carried out by terrorists and anybody conducting it or answering questions would be arrested. Those organising the survey subsequently arranged to be accompanied by a person of standing in the community to allay suspicions.

The study, entitled “Cancer, Infant Mortality and Birth Sex-Ratio in Fallujah, Iraq 2005-2009”, is by Dr Busby, Malak Hamdan and Entesar Ariabi, and concludes that anecdotal evidence of a sharp rise in cancer and congenital birth defects is correct. Infant mortality was found to be 80 per 1,000 births compared to 19 in Egypt, 17 in Jordan and 9.7 in Kuwait. The report says that the types of cancer are “similar to that in the Hiroshima survivors who were exposed to ionising radiation from the bomb and uranium in the fallout”.

Of particular significance was the finding that the sex ratio between newborn boys and girls had changed. In a normal population this is 1,050 boys born to 1,000 girls, but for those born from 2005 there was an 18 per cent drop in male births, so the ratio was 850 males to 1,000 females. The sex-ratio is an indicator of genetic damage that affects boys more than girls. A similar change in the sex-ratio was discovered after Hiroshima.

The US cut back on its use of firepower in Iraq from 2007 because of the anger it provoked among civilians. But at the same time there has been a decline in healthcare and sanitary conditions in Iraq since 2003. The impact of war on civilians was more severe in Fallujah than anywhere else in Iraq because the city continued to be blockaded and cut off from the rest of the country long after 2004. War damage was only slowly repaired and people from the city were frightened to go to hospitals in Baghdad because of military checkpoints on the road into the capital.