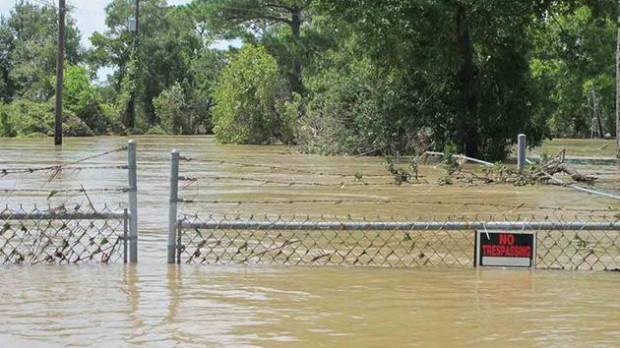 Above:  A barbed-wire fence encircles the Highlands Acid Pit that was flooded by water from the nearby San Jacinto River as a result from Harvey, August 31. 018. (AP Photo/Jason Dearen)

Long a center of the nation’s petrochemical industry, the Houston metro area has more than a dozen Superfund sites, designated by the Environmental Protection Agency as being among America’s most intensely contaminated places. Many are now flooded, with the risk that waters were stirring dangerous sediment.

The Highlands Acid Pit site near Chandler’s home was filled in the 1950s with toxic sludge and sulfuric acid from oil and gas operations. Though 22,000 cubic yards of hazardous waste and soil were excavated from the acid pits in the 1980s, the site is still considered a potential threat to groundwater, and the EPA maintains monitoring wells there.

When he was growing up in Highlands, Chandler, now 62, said he and his friends used to swim in the by-then abandoned pit.

“My daddy talks about having bird dogs down there to run and the acid would eat the pads off their feet,” he recounted on Thursday. “We didn’t know any better.”

The Associated Press surveyed seven Superfund sites in and around Houston during the flooding. All had been inundated with water, in some cases many feet deep.

On Saturday, hours after the AP published its first report, the EPA said it had reviewed aerial imagery confirming that 13 of the 41 Superfund sites in Texas were flooded by Harvey and were “experiencing possible damage” due to the storm.

The statement confirmed the AP’s reporting that the EPA had not yet been able to physically visit the Houston-area sites, saying the sites had “not been accessible by response personnel.” EPA staff had checked on two Superfund sites in Corpus Christi on Thursday and found no significant damage.

AP journalists used a boat to document the condition of one flooded Houston-area Superfund site, but accessed others with a vehicle or on foot. The EPA did not immediately respond to questions about why its personnel had not yet been able to do so.

“Teams are in place to investigate possible damage to these sites as soon flood waters recede, and personnel are able to safely access the sites,” the EPA statement said.

Houston Mayor Sylvester Turner, speaking with reporters at a news conference on Saturday after the AP report was published, said he wants the EPA “in town to address the situation.”

Turner said he didn’t know about the potential environmental concerns soon enough to discuss them with President Donald Trump.

“Now we’re turning out attention to that,” he said. “It is always a concern. The environment is very concerning, and we’ll get right on top of it.”

At the Highlands Acid Pit on Thursday, the Keep Out sign on the barbed-wire fence encircling the 3.3-acre site barely peeked above the churning water from the nearby San Jacinto River.

A fishing bobber was caught in the chain link, and the air smelled bitter. A rusted incinerator sat just behind the fence, poking out of the murky soup.

Across the road at what appeared to be a more recently operational plant, a pair of tall white tanks had tipped over into a heap of twisted steel. It was not immediately clear what, if anything, might have been inside them when the storm hit.

EPA Administrator Scott Pruitt has called cleaning up Superfund sites a priority, even as he has taken steps to roll back or delay rules aimed at preventing air and water pollution. Trump’s proposed 2018 budget seeks to cut money for the Superfund program by 30 percent, though congressional Republicans are likely to approve a less severe reduction.

Like Trump, Pruitt has expressed skepticism about the predictions of climate scientists that warmer air and seas will produce stronger, more drenching storms.

Under the Obama administration, the EPA conducted a nationwide assessment of the increased threat to Superfund sites posed by climate change, including rising sea levels and stronger hurricanes. Of the more than 1,600 sites reviewed as part of the 2012 study, 521 were determined to be in 1-in-100 year and 1-in-500 year flood zones. Nearly 50 sites in coastal areas could also be vulnerable to rising sea levels.

The threats to human health and wildlife from rising waters that inundate Superfund sites vary widely depending on the specific contaminants and the concentrations involved. The EPA report specifically noted the risk that floodwaters might carry away and spread toxic materials over a wider area.

The report listed two dozen Superfund sites determined to be especially vulnerable to flooding and sea-level rise. The only one in Texas, the Bailey Waste Disposal site south of Beaumont, is on a marshy island along the Neches River. The National Weather Service said the Neches was expected to crest on Saturday at more than 21 feet above flood stage – 8 feet higher than the prior record.

In Crosby, across the San Jacinto River from Houston, a small working-class neighborhood sits between two Superfund sites, French LTD and the Sikes Disposal Pits.

The area was wrecked by Harvey’s floods. Only a single house from among the roughly dozen lining Hickory Lane was still standing.

After the water receded on Friday, a sinkhole the size of a swimming pool had opened up and swallowed two cars. The acrid smell of creosote filled the air.

Rafael Casas’ family had owned a house there for two decades, adjacent to the French LTD site. He said he was never told about the pollution risk until it came up in an informal conversation with a police officer who grew up nearby. Most of the homes had groundwater wells, but Casas said his family had switched to bottled water.

“You never know what happens with the pollution under the ground,” said Casas, 32. “It filters into the water system.”

His neighbor, Mary Ann Avila, was sobbing as she surveyed her waterlogged home across from the sinkhole. She said officials had sent her a letter warning her to have her well tested. She said her family hadn’t had any health problems in the 17 years she’s lived there.

“Even the man that drilled our well drank from it,” said Avila, 39. “But we basically just bathe, wash our face and wash our teeth with it. But not drinking water.”

The water had receded by Saturday at Brio Refining Inc. and Dixie Oil Processors, a pair of neighboring Superfund sites about 20 miles southeast of downtown Houston in Friendswood. The road was coated in a layer of silt. Mud Gully Stream, which bisects the two sites, was full and flowing with muddy water.

Both sites were capped with a liner and soil as part of EPA-supervised cleanup efforts aimed at preventing the contamination from spreading off the low-lying sites during floods. Parts of the Brio site were elevated by 8 feet.

John Danna, the manager hired by the companies to oversee the sites, said in a phone interview that he went there after the storm and saw no signs of erosion. He said he didn’t know how high the flooding got in Harvey’s wake and that no testing of the water still draining from the area had been conducted. EPA staff are expected to visit in the next week, he said.

A security guard at the Patrick Bayou Superfund site, just off the Houston Ship Channel in Deer Park, said Saturday that flooding came hundreds of feet inland during the storm. The water has since receded back into the bayou, where past testing has shown the sediments contain pesticides, toxic heavy metals and PCBs. The site, surrounded by active petrochemical facilities, is still awaiting a final plan for cleanup.

The San Jacinto River Waste Pits Superfund site was completely covered with floodwaters when an AP reporter saw it Thursday. According to its website, the EPA was set to make a final decision this year about a proposed $97 million cleanup effort to remove toxic waste from a paper mill that operated there in the 1960s.

The flow from the raging river washing over the toxic site was so intense it damaged an adjacent section of the Interstate 10 bridge, which has been closed to traffic due to concerns it might collapse.

There was no way to immediately assess how much contaminated soil from the site might have been washed away. According to an EPA survey from last year, soil from the former waste pits contains dioxins and other long-lasting toxins linked to birth defects and cancer.

The EPA said Saturday that part of the San Jacinto Waste Pits site was a temporary “armored cap” designed to prevent hazardous materials from migrating down river. Based on river conditions, the agency said its personnel would go to the site on Monday by boat. EPA dive teams would survey the condition of the underwater cap “when conditions allow,” the agency’s statement said.

Kara Cook-Schultz, who studies Superfund sites for the advocacy group TexPIRG, said environmentalists have warned for years about the potential for flooding to inundate Texas Superfund sites, particularly the San Jacinto Waste Pits.

“If floodwaters have spread the chemicals in the waste pits, then dangerous chemicals like dioxin could be spread around the wider Houston area,” Cook-Schultz said. “Superfund sites are known to be the most dangerous places in the country, and they should have been properly protected against flooding.”

A video of Associated Press writer Jason Dearen’s tour by boat of several Superfund sites in the Houston area after Harvey: https://www.youtube.com/watch?v=erg6azfuP5k&feature=youtu.be