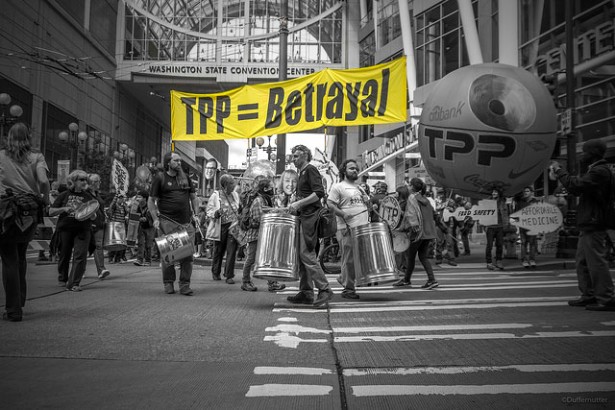 TPP And Free Trade: Time To Retake The English Language

The proponents of the Trans-Pacific Partnership (TPP) are planning to do a full court press in the lame duck session of Congress following the election. We will be bombarded with speeches and columns from President Obama and other illustrious figures telling us how it is important to approve the TPP for a variety of reasons.

We can be certain that one of the reasons will be the inherent virtues of free trade. They will not be telling the truth.

The TPP is not about free trade. It does little to reduce tariffs and quotas for the simple reason that these barriers are already very low. In fact, the United States already has trade deals with six of the other 11 countries in the TPP. This is why the non-partisan United States International Trade Commission (ITC) estimated that when the full gains from the TPP are realized in 2032, they will come to just 0.23 percent of GDP. This is a bit more than a normal month’s growth.

In fact, the TPP goes far in the opposite direction, increasing protectionism in the form of stronger and longer patent and copyright protection. These forms of protection for prescription drugs, software and other products, often raise the price by a factor of a hundred or more above the free market price. This makes them equivalent to tariffs of several thousand percent.

It is likely the case that the strengthening of patent and copyright related protections in the TPP does more to impede free trade than the modest reductions in tariffs do to promote free trade. Unfortunately, neither the ITC nor anyone else has attempted to quantify the cost of the protectionist measures in the TPP so we don’t have a good basis for comparison at this point.

The other point to be made about free trade and protectionism is that our push for free trade has always been very selective. The North American Free Trade Agreement (NAFTA) and other trade deals were explicitly designed to make it as easy as possible for US corporations to manufacture goods in the developing world and ship them back to the United States.

Unlike manufacturing workers, doctors are powerful enough to get protection. It is not generally possible for a doctor trained in another country to practice medicine in the United States unless they pass a US residency program — for which there is a strict quota on foreign trained students. As a result of this restriction, doctors in the United States earn on average twice as much as doctors in Canada, Germany and other wealthy countries. This protectionism costs the United States roughly $100 billion a year (around $700 per family) in higher health care costs.

If our trade negotiators actually were interested in “free trade,” they would have constructed a system whereby foreign trained doctors could be certified as meeting US standards. They would then have the same freedom to practice as any doctor born and trained in the United States.

Note that this is a trade issue, not an immigration issue. Foreign doctors could probably get away with working in restaurants or construction in the US, they just can’t get away with working as doctors. If we had a number of additional foreign doctors enter the US equal to just one month’s normal flow of immigrants, it would hugely transform the market for physicians in the United States.

The potential gains from eliminating the barriers that prevent foreign doctors and other highly paid professionals from working in the United States are enormous. These barriers are not removed in trade deals because the people negotiating them all have parents, siblings and/or children in these professions. They want to protect their incomes; they don’t care about the income of autoworkers and textile workers.

So let’s be clear. President Obama and other proponents of TPP are protectionists. This matters hugely in public debate because most educated people have a Trumpian-type commitment to anything labeled as “free trade.” They think that they have to support it because otherwise they will be bad people.