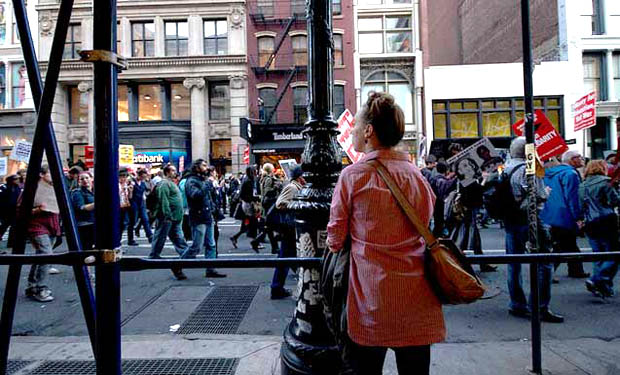 TPP in the USA Is Why We Occupy

The second anniversary of Occupy Wall Street came and went on Tuesday with a fair degree of introspection in the socially conscious corners of social media. What did it mean? What did it accomplish? Is it over or just beginning?

More than a few voices suggested the whole thing was nothing more or less than a body-odor ego trip for righteousness junkies looking to lord it over their less-invested activist counterparts. For some of the people in those very large crowds, I’m sure that characterization is true; shake a tree full of activists, and a few rotten gourds are sure to fall and splatter.

The excellent author Rebecca Solnit, in a Facebook post on S17 rebutting those who would spurn the whole thing as a giant waste of time, explained like a songbird in full voice what Occupy was, is, will be, and what it accomplished:

Please assess how many Occupy encampments there were – one UCLA estimate was 400 in California alone during the height in late 2011 – and then quantify how in those myriad locations in the USA and other countries (including Germany and New Zealand) many people were served how many free meals, how much free healthcare, how many libraries were set up, how many people found solidarity, a new way of doing things, a sense of possibility…

…how many debtors found support for their afflictions, how many homeless people found space to exist for a while, how many foreclosures were successfully protested, how many students rethought the loan racket, how much was done by the stalwarts at Occupy Sandy to provide food, clothing, medical supplies, solidarity, organizing, and support for those devastated by the storm…

…and how many times did the mainstream media use language Occupy created, and how many laws and elections were shaped by the terms Occupy dictated, and without Occupy would the president have just said, “Because even though our businesses are creating new jobs and have broken record profits, the top 1 percent of Americans took home 20 percent of the nation’s income last year, while the average worker isn’t seeing a raise at all. In fact, that understates the problem. Most of the gains have gone to the top one-tenth of 1 percent.”

It didn’t do everything but it did a lot. But much of what it did can’t be quantified, because it was a change in people’s sense of self, of civil society, of possibility, an experience of direct democracy, an articulation of what is wrong with the economic system, a mingling with people from very different walks of life, an open dialogue, a moment of terror for the bankers and rulers, and so much more. I was changed, and for the better, and I am not alone.

No, Rebecca, you are not alone. Occupy served, and continues to serve, a great and important purpose, if for no other reason than because people like Harry Binswanger are out there, and they speak to the other side of the equation, the side that says having everything is not enough, virtually incalculable wealth is not enough, so we demand more, and we will strip it off your back to get it.

I give you Mr. Harry Binswanger, and his September 17 article titled, “Give Back? Yes, It’s Time for the 99% to Give Back to the 1%.” No, not the Onion. Forbes Magazine:

It’s time to gore another collectivist sacred cow. This time it’s the popular idea that the successful are obliged to “give back to the community.” That oft-heard claim assumes that the wealth of high-earners is taken away from “the community.” And beneath that lies the perverted Marxist notion that wealth is accumulated by “exploiting” people, not by creating value-as if Henry Ford was not necessary for Fords to roll off the (non-existent) assembly lines and Steve Jobs was not necessary for iPhones and iPads to spring into existence.

Let’s begin by stripping away the collectivism. “The community” never gave anyone anything. The “community,” the “society,” the “nation” is just a number of interacting individuals, not a mystical entity floating in a cloud above them. And when some individual person-a parent, a teacher, a customer – “gives” something to someone else, it is not an act of charity, but a trade for value received in return.

Each particular individual in the community who contributed to a man’s rise to wealth was paid at the time – either materially or, as in the case of parents and friends, spiritually. There is no debt to discharge. There is nothing to give back, because there was nothing taken away.

Well, maybe there is-in the other direction. The shoe is on the other foot. It is “the community” that should give back to the wealth-creators. It turns out that the 99% get far more benefit from the 1% than vice-versa. Ayn Rand developed the idea of “the pyramid of ability,” which John Galt sets forth in Atlas Shrugged.

Dismiss this as the rantings of just another Randian clown at your extreme peril, for what Mr. Binswanger lays out here, with his bare face hanging out and the devil take the hindmost, is the operating principle behind the sagging disaster zone that is “capitalism” in America. These people not only exist, they are running the joint. This isn’t the crazed scribblings of an outsider, but the sweaty lament of trickle-down economics forced to contend with the first real public pushback the whole sorry fraud of an idea has experienced since its debut.

Mr. Binswager needn’t worry, however, as his concerns are being well cared for in the highest seats of power. The trade pact known as the Trans Pacific Partnership is wending its way to existence with the express approval and muscular push of the Obama administration. This has been happening for a while now, and almost entirely in secret, because if people knew what it entailed, they might, you know, Occupy.

Let’s see…TPP favors banks over people, companies over workplace safety and the environment, coal and oil over alternative energy sources, major agribusinesses over local farmers and local produce, the absolute end of “Buy American,” as well as the end of laws protecting even the most anemic minimum wage, product safety…and here’s the best part: if corporations feel like governments are encroaching on corporate power and “rights” in these matters, they can sue those governments in specially-created tribunals. NAFTA has similar tribunals that have levied hundreds of millions of dollars in fines; under TPP, the rights of corporations to sue for “damages” is massively expanded.

TPP is the point of why Occupy came to exist in the first place, the distilled essence. If this deal happens, it will be the final triumph of the legal fiction known as “corporate personhood,” the fraud that gives your 14th Amendment rights to a faceless, unassailable company with billions in assets and the will to use them in our already-septic political system. With this “trade” pact, they will be able to stretch those rights globally, nationally, regionally, locally, and literally right down your throat.

It sounds like a bad Batman plot. It isn’t. The president thinks it’s a fine idea.

While you still can.