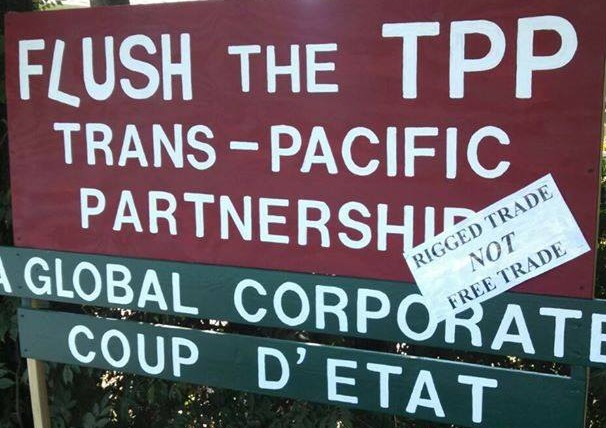 Kevin Zeese: The Trans-Pacific Partnership has nothing to do with trade or freedom, and ongoing demonstrations could encourage those on the inside to speak up

Leaders of 12 countries considering an extensive trade pact will meet in Indonesia next week for negotiations. The Trans-Pacific Partnership would be the largest U.S. free trade agreement in history, covering 60 percent of the global economy.

Now joining us in-studio to discuss all this is Kevin Zeese.

Kevin, you’re a lawyer, activist, and codirector of PopularResistance.org. Thanks so much for being with us.

KEVIN ZEESE, ORGANIZER, POPULARRESISTANCE.ORG: Happy to be here. Thanks.

DESVARIEUX: So, Kevin, first of all, you’ve written extensively about this, and you say that there’s nothing about this pact that has to do with freedom or trade. Can you explain that?

ZEESE: Well, free trade is pretty much their marketing term for this. What the reality is is rigged, a rigged agreement for the largest transnational corporations in the world. And they’ll dominate these countries in Asia. Vietnam, Peru, Malaysia, all these countries will be dominated by JPMorgan, Halliburton. You know, all the big U.S. companies, Monsanto, will dominate their economies, because what this does is rig the economy for them.

And it does this in a number of ways. But it gives a lot of power to corporations. And it does it by, for example, setting up these trade tribunals where corporations can sue governments if their profits, their expected profits are hurt, if they lose profits. Let’s say Vietnam passes a labor law or a safety law or an environmental law or a health law and that costs the company money, costs them profits. The company can then sue for the expected profits. And they go to a special court, a trade tribunal with three judges, and those three judges, they come from the corporations. They’re corporate lawyers on leave from their corporate job. They make a decision on whether or not their profits were lost. And then they go back to their corporations. That’s just one way that this does this.

It also just–it’s really part of a neoliberal privatization of economies. It really tries to undermine any kind of public service from government. Health care will be more and more of a commodity. It’ll really put Japan’s health care program, which is one of the best in the world–Australia’s also one of the best in the world, New Zealand’s also–they’ll all be put at risk by this privatization model making health care into a commodity. And that’s true just not for health care but a whole series of issues.

It also threatens our Internet. It’s a–you know, a lot of things that the corporations couldn’t get through the front door in Congress, like SOPA, that regulated the internet, they will try to get through the TPP, and so undermine our internet freedom.

So whatever issue you’re concerned about, whether it’s internet freedom, workers’ rights, wages, the environment, health care, safety, consumer safety, all these issues will be adversely affected by the TPP because become a corporate-dominated economy, a global economy. It’s really a global corporate coup.

DESVARIEUX: And really this–.

ZEESE: Well, first the secrecy. You mentioned it’s been kept secret. For four years now the Obama administration’s been negotiating this. They’ve had 19 rounds of trade negotiations, and you’ve hardly seen it covered in the media at all.

And so what we did last week: we actually went to the U.S. Trade Representative Office. We decided to expose the secret. So we were able to put on–some people wore workers’ clothes and helmets, and we climbed up onto their building, and we dropped massive banners about this secret trade deal on their own building to try to expose the secret. And we’re starting to do that. So more and more people are getting to know about it.

And so this is going to have a cross-partisan, across the political spectrum opposition. And we’re already seeing that develop in Congress. Alan Grayson from Florida, a Democrat, he’s been very aggressively trying to expose this and fight this.

ZEESE: Progressive. On the right, Michelle Bachmann is coming out against it, and Walter Jones from North Carolina, another Republican. Rosa DeLauro from Connecticut, another Democrat. Elizabeth Warren from Massachusetts.

So you’re starting to see this interesting mix politically. It’s just like the Syrian war, where you had this unusual coalition of people from all parts of the political spectrum saying, no, we don’t want another war. Well, people aren’t going to want another NAFTA either, and this global corporate coup is NAFTA on steroids. This is going to be bad for our economy. It’s not going to advance us in any significant way. It really–and as more people know about it, as Ron Kirk said, more people will oppose it.

And we want to go to Congress and say, take your responsibility. Don’t give the power to a supreme executive. That’s not what the Constitution says. The Constitution says, you are responsible for trade. You should demand to see this trade agreement, debate it, have hearings on it, allow witnesses, allow amendments. You should not be giving the power to President Obama. It’s your responsibility.

DESVARIEUX: You mentioned NAFTA. How is this similar to NAFTA?

ZEESE: This is basically NAFTA on steroids. It’s the same kind of thing. These tribunals I talked about existed with NAFTA already, and they’ve been very successful to corporations. Corporations win 90 percent of the time when they sue in these trade tribunals under NAFTA.

And with NAFTA you could see what happened with our economy. It resulted in massive loss of jobs, hundreds of thousands of jobs lost. Terrible for the Mexican workers as well. Small farmers were forced to compete with subsidized corn. They went out–a lot of them went out of business, had to move to the cities, caused economic disruption in the cities. And that was one of the causes of the undocumented immigration we saw in the United States was because of NAFTA, because we undermined that economy.

Who gets rich from these agreements? The oligarchs and the wealthiest. And that’s what we’re going to see here.

Just last week, the Center for Economic and Policy Research (CEPR) came out with a report. The report was about what the TPP will do for our economy. And it was kind of remarkable. It’s amazing this is even being pursued. Under–what CEPR said was there’ll be a 0.1 percent increase in the GDP each year. That’s one-tenth of 1 percent increase in the GDP each year. That’s almost insignificant, one-tenth of one percent. And they also said that they also found that 90 percent of American workers will see their incomes and their wages go down, because we’re starting this race to the bottom, continuing this race to the bottom in wages. And so our middle class will get weaker and you’ll see the wealth divide expand.

So what’s good about this trade agreement? That’s why I said earlier the more people know about it, the less likely it is to pass. And that’s why they’re keeping it a secret and trying to keep Congress out, because they don’t want a debate on this, they don’t want the facts to come out about this. They want to sneak this through and do–. And when NAFTA was passed, it was also passed by fast track.

And one of the things that these kind of–NAFTA and World Trade Organization, these kinds of treaties, they have in them requirements that countries make their laws align with the treaty. And when the WTO passed, the World Trade Organization, for example, that’s how we lost the separation between the investment banks and traditional banks. That’s how we lost that separation which was so important to the economy, that separate regulatory structure, because that was required by the WTO.

Well, this law is going to require all sorts of changes in our laws as well. For example, laws favoring U.S.-made products, that’s a trade barrier. That’d be unfair. Laws favoring local green economy, that’s unfair trade barrier. That’ll be a problem. There’s even people talking about farmers markets being under attack because of this. So–and we definitely won’t be able to see GMO labeling. That’s not going to happen with this. That’ll be a trade barrier if you are required to label the foods [incompr.] GMO.

So this law affects much more than just trade. A very small [incompr.] trade [incompr.] about tariffs. Okay, that’s no big deal and you don’t need fast track for that. But if you’re going to change a whole economy and give more power to these transnational corporations, that’s why they’ve got to do it in secret and that’s why they’ve got to do fast track, because people when they hear that their food’s not going to be labeled properly, that they’re not going to be able–that their wages are going to go down, that their farmers markets will be threatened, that all sorts of regulations on food–we won’t be sure how safe they are any longer [incompr.] environmental effects, there’s so many negative things about this law that as it becomes known to the American people, I have no doubt it will fail. I think we’re going to stop this law.

And we’re actually starting a project–next phase of this–we did these protests this week where we had the–take over their building and we did a fast track train through Congress, through the whole Washington, D.C., area to expose the TPP. We built a 35-foot train. It went throughout the city to expose it.

Now we’re going to the phase of really working on Congress. And every Tuesday we’ll be up there with what we’re calling the fair trade brigades, who will be pushing members of Congress to stand up for their constitutional responsibility, to do what the Commerce Clause says it’s their job to do, regulate trade, and not approve fast track, not give that power to the executive, but do what the Congress is supposed to do: hold hearings, debate it, hear witnesses, get expert testimony, make amendments, put in place a law that puts the people and the planet before profits, not profits before the planet and the people.

DESVARIEUX: Okay. Great. As you know, I’m on Capitol Hill, so it’ll be good to connect.

DESVARIEUX: Okay. Excellent. Well, thank you so much for joining us in-studio, Kevin.