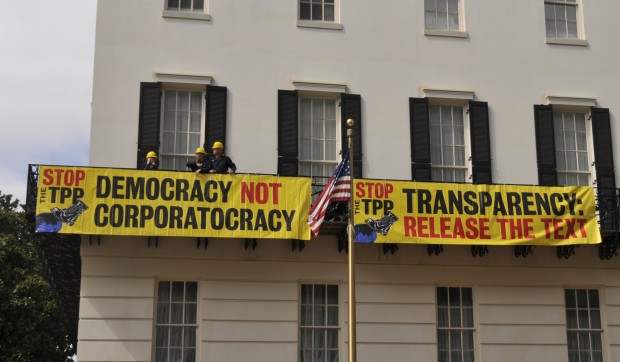 TPP Talks Come To DC: Time To Release The Text!

Join us by signing and sending the letter copied below to Ambassador Froman. When you sign the petition using this tool, it will be emailed directly to him. Please also share the letter with others and encourage them to sign.

We’ve just completed a fantastic week of actions to tell Congress that there is strong opposition to Fast Track and the TPP.

And now we’ve learned that the Trans-Pacific Partnership (TPP) negotiators are coming to Washington, DC in early December so that the President can finalize the text.

As you may well know, the parts of the TPP that we’ve seen show that this agreement will severely undermine our ability to protect our communities and the planet. The TPP extends way beyond a traditional trade agreement and puts in place laws that would not pass through Congress in the light of day. The TPP deregulates corporations and gives them enhanced power to sue from the local to the national level if laws interfere with their expected profits. And the court that would be used operates outside of our legal system and can’t be challenged.

The TPP is the nightmare that we describe. That’s why the negotiators have classified the text for the first time in the history of trade agreements. And that’s why we are joining the voices of those in other affected countries to say that the office of the US Trade Representative must release the text!

****Please mark your calendar now to join us in Washington, DC on Sunday, December 7 at the Office of the US Trade Representative for a rally at 4 pm.***

Bring your signs, your noisemakers and your friends. A recent rally in the small country of New Zealand brought out tens of thousands of people. Can we do the same? How much does protection of your community matter to you?

On Monday, December 8, we will hand deliver a letter to US Trade Representative Michael Froman demanding that the text be released. We may even decide to stay until we get it. There will also be a rally outside the USTR that day at noon.

Join us by signing and sending the letter copied below to Ambassador Froman. When you sign the petition using this tool, it will be emailed directly to him. Please also share the letter with others and encourage them to sign.

We’ve worked so hard to delay the TPP negotiations and it’s been working. They hoped to have it completed years ago.

We must continue to wear the negotiators down and show them that it’s time to give up on secret agreements that grow corporate power and hurt communities. They won’t pass because the people will always stop them. Instead, the trade representatives must work with people to create agreements that are good for all of us and for the planet.

Let’s flex our people power and stop the TPP!

We, the undersigned, request that you make all documents related to the Trans Pacific Partnership (TPP), Transatlantic Trade and Investment Partnership (TTIP) and the Trade in Services Agreement (TISA) public.

These three agreements would dramatically change the laws of the United States as well as state and local jurisdictions. They would impact every aspect of our lives including the food we eat, the water we drink and the air we breathe as well as our jobs, healthcare, Internet access and many other basic necessities.

The people have the right to participate in deciding our futures and should not have important aspects of our lives dictated by secretly negotiated trade agreements.

Transparency is an essential aspect of democratic government. It is time to end the secrecy that hides the content of these agreements. The people should participate in determining their own futures.

Release the texts now so that they can be analyzed and debated in full by the public.