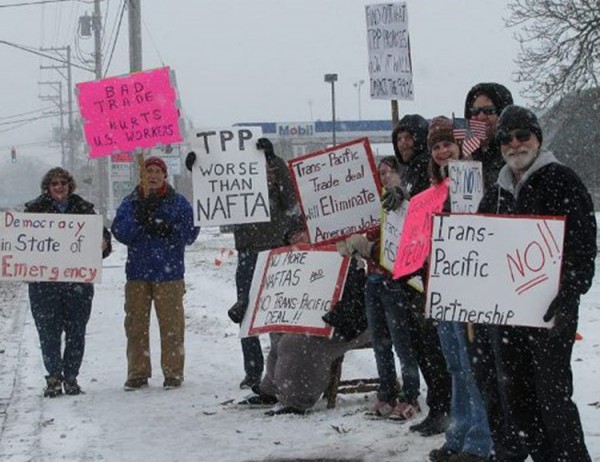 “Those at the top have never done better,” President Obama ruefully acknowledged in his January 28 State of the Union speech. “But average wages have barely budged. Inequality has deepened.”

Yet, moments later, Obama heartily endorsed the Trans-Pacific Partnership (TPP), which as drafted directly reflects the demands of “those at the top” and would, if passed, severely intensify the very inequality spotlighted by the president. The TPP would provide transnational corporations with easier access to cheap labor in Pacific Rim nations and new power to trump public-interest protections—on labor, food safety, drug prices, financial regulation, domestic procurement laws, and a host of others—established over the last century by democratic governments. The nations currently negotiating the TPP—which together comprise nearly 40%of the world economy—include the United States, Australia, Brunei, Canada, Chile, Japan, Malaysia, Mexico, New Zealand, Peru, Singapore, and Vietnam. Among them, Malaysia, Brunei, Mexico, Singapore, and Vietnam, are all notorious violators of labor rights The TPP’s labor provisions are far too weak to begin uplifting wages, conditions, and rights for workers in these nations.

As with NAFTA, the TPP will benefit U.S. companies relocating jobs to low-wage, high-repression nations, argues economist Mark Weisbrot, co-director of the Center for Economic and Policy Research (CEPR). This would also exert strong downward pressures on the pay of U.S. workers, “Most U.S. workers are likely to lose out from the TPP,” Weisbrot says. “This may come as no surprise after 20 years of NAFTA and an even-longer period of trade policy designed to put lower- and middle-class workers in direct competition with low-paid workers in the developing world.”

Obama has billed the TPP as a “trade agreement” that will create U.S. jobs. The pact, however, actually has little to do with reducing trade restrictions. Tariffs are now a minimal factor for most global trade. Lori Wallach, director of Public Citizen’s Global Trade Watch, points out that only five of the TPP’s twenty-nine chapters are about trade at all. But the remaining provisions cover such immensely important measures as the creation of a kind of corporate supremacy over the democratically established regulations enacted by member nations. If an existing law threats to diminish profits, corporations in the TPP nations would be entitled to bring their complaint to an international dispute panel of anonymous corporate members, who could impose major financial penalties on the “offending” countries. “The Trans-Pacific Partnership,” Wallach concludes, “is a Trojan horse for a host of awful measures that have nothing to do with trade and would never get through Congress in the light of day.”

Some of the most controversial TPP features have become public only thanks to Wikileaks. American participation in the TPP negotiations has been limited to a tiny circle of just 600 top corporate executives. Numerous members of Congress have complained about the secrecy surrounding the negotiations, charging that it exceeds even that practiced by the Bush-Cheney administration. The public’s understanding of the massive stakes involved in the TPP has been further hampered by the failure of major media to offer even minimal analysis. The major-network news shows, according to a new study by Media Matters, made no mention at all of the TPP from August 2013 through January 2014.

Despite remaining in the shadows, the TPP has met fierce opposition from both elected representatives and hundreds of labor, consumer, small-farmer, health-reform, and other civic organizations. TPP’s only foreseeable path to passage in the near future had been the use of a “fast-track” procedure, under which NAFTA and subsequent international agreements have been negotiated. Instead of the normal process of deliberation and debate by Congress, the fast-track process (which requires separate congressional approval) substitutes minimal debate and permits no amendments. Senate Majority Leader Harry Reid, acutely aware of residual public resentment against NAFTA’s 20-year legacy of job loss and wage decline, has firmly ruled out the fast-track route for the TPP. Influential Democratic senators like Elizabeth Warren (D-MA) and Sherrod Brown (D-OH) have already directed their fire at the TPP, with Warren demonstrating her seriousness by voting against Obama’s nominee for U.S. Trade Representative, former Citigroup director Michael Froman. Meanwhile, 150 House Democrats and several dozen Republicans signed a November letter opposing the fast-track process.

“We’re seeing ‘trans-partisan’ opposition to the Partnership,” said Michael Dolan, the International Brotherhood of Teamsters (IBT) legislative representative on trade issues. As with NAFTA where some conservative Pat Buchanan-style nationalists saw a transnational corporate threat to U.S. sovereignty, some normally pro-corporate members of Congress are adopting an oppositional stance. The Republican opposition to the TPP includes Tea Partiers Michele Bachmann (R-MN) and Louie Gohmert (R-TX) and over 20 others. According to Arthur Stamoulis, executive director of the Citizens Trade Campaign which is leading opposition to the TPP, the stance of these Republicans goes beyond their seemingly-reflexive opposition to any Obama initiative.

While a number of Tea Party Republicans voted in favor of the three Obama-promoted free-trade agreements in 2011, they are viewing the TPP differently because of its magnitude and due to pressure from the Republican base. “Because of its massive size, the TPP has captured a lot more attention from the Right than the Korea pact ever did,” Stamoulis says. “With Republicans’ base much more engaged on the TPP—the Tea Party Nation and others opposing it—I expect to see a lot more Republican opposition this time around, and indeed, we already are seeing that.” The visceral dislike of Obama by many on the Right may add fuel to rightist opposition to the TPP and the fast-track procedure, Stamoulis concedes, but he points out that opposition to corporate-style globalization has been mounting among Republican voters for some time. “Polls showed that Republican voters’ opposition to free-trade agreements existed back during the Bush administration as well,” he notes.

On the Democratic side, only a relative handful of remaining “free-traders” (their ranks having been thinned in recent elections that unseated a number of the pro-globalization Dems) like Rep. Ron Kind (Wisc.), stand with Obama at this point. Unlike the NAFTA vote in 1993, where about almost half of House Democrats and over 3/4 of Senate Republicans voted for the measure, Democrats in both Houses have become notably disenchanted with the results of “free trade” and the resultant offshoring of jobs. “Democratic opposition to job-killing Free Trade Agreements has hardened in recent years,” says CTC’s Stamoulis.

“Not only do more members of Congress understand the disastrous effects of pacts like NAFTA, but they also see that two years into President Obama’s biggest trade agreement to date—the Korea Free Trade Agreement—not only is our deficit with South Korea up, but the promised exports are actually down.” The Democratic base, as reflected in polling data, also seems more actively opposed to any massive new free trade agreement, based on their experiences with 20 years of job losses and community devastation that they see as products of NAFTA. A wide array of mostly progressive organizations, including 564 labor, environmental, family farm, human rights and other groups, signed on to a letter opposing the fast-track route to passing the TPP. With this pressure from the grass roots, “Democrats in Congress are beginning to understand not only the policy folly of TPP, but the political folly associated with it as well,” Stamoulis states.

With implacable opposition to the TPP among both the president’s strongest allies and most ardent enemies, the TPP has little realistic passage before the November mid-term elections, the Teamsters’ Dolan told Dollars & Sense. But there is still a danger that Obama might seek to gain passage of the Trans-Pacific Partnership, using the fast-track procedure, in the “lame-duck” session after the elections when defeated and retiring members of Congress are no longer accountable to voters.

However, such a ploy would leave Obama with a legacy of making little headway for workers against rising inequality, while succeeding only in promoting the TPP and other trade agreements that will worsen America’s glaring economic fault lines.