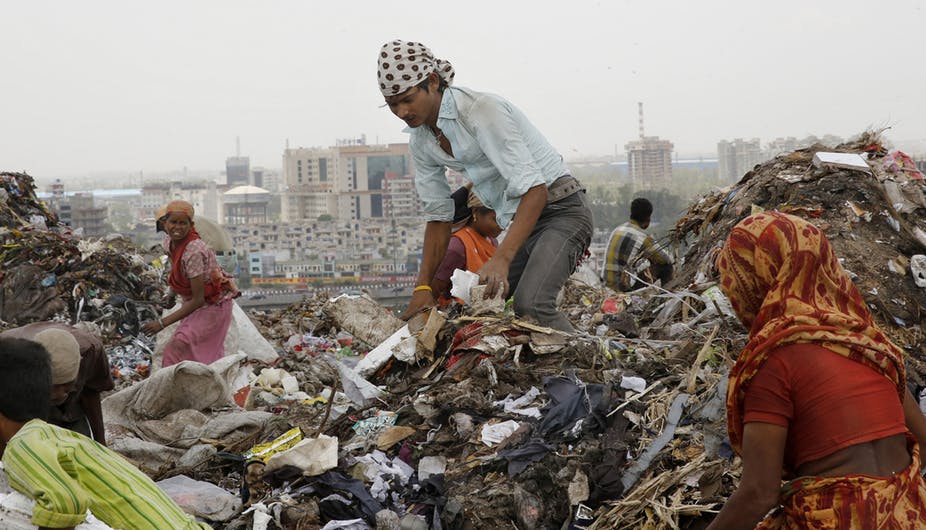 Tracking The Battles For Environmental Justice: Here Are The World’s Top 10

Above Photo: In Delhi, middle class residents and informal recyclers joined together to oppose the privatisation of waste management. EPA

In contrast, labour conflicts, including strikes and lock-outs, carry such gravity that the International Labour Organization tracks these on a systematic basis. As more communities are refusing to allow the destruction and contamination of their land, water, soil and air, these, in turn, deserve to be counted.

The Environmental Justice Atlas (EJAtlas), an inventory of social conflicts around environmental issues, fills that gap. It is funded by two successive European research projects, through a collective effort of scientists and activists. It records the failures and successes of the worldwide movement for environmental justice.

The project is directed and coordinated by Leah Temper, Daniela Del Bene and Joan Martínez-Alier at the Institute of Environmental Science and Technology at the Autonomous University of Barcelona. It has collected and categorised about 2500 ecological distribution conflicts. These focus on who gains and who loses in development processes, arguing that these movements play a fundamental role in redefining and promoting sustainability.

In honour of World Environment Day, on June 5th, some of the highlights of the most pertinent findings, stemming from the ten most critical categories of environmental distribution conflicts facing the world today are shown. These are listed in order of most-catalogued cases in the EJAtlas. But due to the nature of the project, this is not indicative of its global significance.

Booming palm oil production is behind a land-grabbing surge for plantations, which threatens communities. Palm oil is now in half of all packaged products sold in the supermarket. These plantations replace food crops, deprive farmers from their land, increase slave labour, cause environmental destruction like deforestation, water pollution, infertile soil and fires. Grassroots activist networks achieved temporary suspensions of further expansion of what they call green deserts in Honduras, Colombia, México, Indonesia and Myanmar.

Renewables are necessary in a post-carbon world, but mega dams like Narmada in India and mega wind projects in Mexico, Kenya, India are triggering conflicts.

Methane emissions and cost overruns are hidden behind a twisted sustainability discourse to justify a new wave of dams, especially in the Himalayas, Amazon basin, Balkans and Africa. In response, some rural communities are creating cooperative wind energy models as alternatives to the corporate schemes. These in turn reshape global production and consumption patterns. Also, communities expose the injustice of large-scale dam projects and redefine their own energy transformations.

New technologies, highly polluting chemicals and massive amounts of water accompany mega-mining expansion in Latin America and Western Africa. Examples of this is seen in bauxite or iron in Guinea, gold in Burkina Faso, Senegal and Ghana). Resistance in Latin America and Africa is strong. Often, there is high participation and leadership of women. Affected communities are developing new local initiatives that are more sustainable.

The fossil fuel industry, faced with declining stocks, depends on unconventional means and locations of extraction. These extend to oil sand drilling and fracking to Arctic drilling and deep water petroleum sources. It has caused contamination of fresh water supplies, devastation of marine systems, seismic activity and global warming.

This gave rise to a Blockadia movement of direct action. Blockadia connects the various struggles to highlight the global and local threats posed by oil, coal and gas extraction. Massive oppositions have resulted in moratoria on off-shore drilling, litigation over continued oil exploration, bans on fracking, the removal of gas pipelines, and the halting of oil and gas operations.

Alliances of grassroots organisations are protecting the health and livelihoods of those living near waste sites by facing down a multi-billion dollar waste industry. GAIA, the Global Alliance for Incinerator Alternatives unites communities resisting incinerators. The Basel Action Network tries to halt the flow of hazardous waste like e-waste from being shipped from high-consumption countries to the Global South. The Global Alliance of Waste Pickers defends the informal recycling sector in more than 28 countries. In Delhi, middle class residents and informal recyclers joined together to oppose the privatisation of waste management and the resulting introduction of incineration.

Illegal sand mining has ten times more economic value than all wildlife crime. The causes of the surge in demand for sand are attributed to a number of reasons. They range from booming building industry to land expansion to mining of ilmenite or zircon at beaches.

The industrialisation of fishing since the 1950s is causing stock collapses and extinctions. Small-scale fishing communities are reclaiming their rights for access to and control over aquatic commons. The World Forum of Fisher People and World Forum of Fish Harvesters and Fish Workers aim to stop fisheries injustices. Some examples are the ones by intensive fish farms in Turkey or in Chile, big port projects in India and polluting industries in Ecuador.

Despite government restrictions, China is swept by large-scale protests against the highly flammable petrochemical Paraxylene, used to make plastic and polyester. Protests in Xiamen in 2007 stopped the construction of a plant. Protests spread to Dalian, Chengdu, Shanghai and elsewhere. Together with protests against incinerators, wastewater issues, and coal-fired power plants for example, a new type of a-political mass mobilisation has emerged.

Nuclear power is criticised because of risks illustrated by accidents in Three Mile Island (1979)], Chernobyl (1986) and Fukushima (2011)]. Particularly controversial were the more risky fast breeder reactors in Creys-Malville in France, where an activist lost his life. In Kalkar, Germany and Monju, Japan there were also serious risks. These were stopped but struggles at other places, such as Kalpakkam in India are ongoing. Accidents and grassroots movements have succeeded in slowing down the nuclear industry, leading to phase outs in many countries.

Despite the impact of pesticides on the environment and human health where it can cause cancer and kill birds, its use in farming is increasing – especially in developing countries. Sadly, it’s usually only when the impact of these toxins have become irreversible that people demand justice for the related health challenges.

In Argentina the use of glyphosate in soybean cultivation is being disputed. In Asia, Latin America and Africa, the use of a nematicide to kill worms threatening banana plantations is being fought. These remain uphill battles.

The case studies and database provided by the EJAtlas support the legitimacy and provide evidence to support the environmental justice movement.

The EJ Atlas shows that people all over the world, organised in groups and networks, struggle for the kind of world they want to create, and in doing so, are promoting sustainability. Environmental conflicts are not disruptions to smooth governance, fixable with market solutions and technology. People are expressing grievances, aspirations and political demands. They should not be repressed; they should lead us to a better world for all.