Above Photo: Kelly Canavan sits atop her father’s tractor locked to the steering wheel./Photo by Anne Meador

UPDATE: Tuesday night, the Charles County Zoning Board held its seventh hearing on Dominion Energy’s zoning permit. Here is a report from AMP Creeks Council, which led the fight:

“In what feels like a miraculous victory against Dominion, the Charles County Board of Appeals voted 4 – 1 to deny the zoning special exception that Dominion needs to build Charles Station — the fracked gas compressor station it wants to put on New Marshall Hall/Barry’s Hill Rd. in Maryland.

Board members, fully aware that this case will move into the circuit court when Dominion appeals their decision, took great pains to lay out the reasons that they voted as they did, citing legal documents, ordinances, and codes to support their positions.  Two issues stood out as being matters of concern for all five Board members:  the risk of explosion and Dominion’s repeated failure to provide information that the Board expressly asked for, which they clearly found suspicious.

Several Board members also specifically mentioned the excellent evidence received from the Opposition.  (That’s us, y’all!)  Thank you to our phenomenal lawyer, J. Carroll Holzer, and to everyone who testified and submitted evidence.

Sean Johnston, the outlying voter, actually said during the public deliberations that he was voting against the project, but something in the wording of the motion apparently did not sit well with him, and that resulted in his dissenting vote.

The AMP Creeks Council would like to be one hundred percent clear that we will continue to fight this project on every level until it has been defeated once and for all.  If you can, please donate HERE to help us fund this fight.

Many people have asked what happens now with the scheduled March 28 MDE air quality permit hearing.  It is our guess that it will still be held, but we won’t know for sure until normal business hours when we can call and ask.  Either way, the MDE is prevented from making a final ruling on the permit until the zoning is in place.

Regretfully, Dominion is still allowed to cut down the 13.3 acres of trees.  They were permitted for that separately, not by the Board of Appeals.  The tree trunks will remain in the ground, and the trees will remain on site for the time being, as they do not have permits to disturb the earth or drag the trees out.

That said, it is a great privilege for AMP Creeks to work with such a committed and passionate community, and we hope that this victory is something you can feel good about celebrating.  We sure as heck do.”

A Maryland woman parked a tractor at the gate of the proposed site of a compressor station in Charles County and locked herself to the steering wheel before dawn Monday morning, preventing workers from entering. Kelly Canavan–with assistance from her sister, her son, a local resident and two environmental activists equipped with protest signs–attempted to delay clear-cutting of trees on the Dominion-owned site before a crucial permit hearing the following day. It was the fourth day of tree-felling to clear a total of 13 acres.

The blockade started at 6:30 am with the tractor rumbling down the narrow road, turning around and re-positioning in the short driveway in the midst of a bucolic setting of trees, gurgling stream and pink-tinted dawn. Canavan slipped her arms into a lockbox device with tight sleeves which secured her to the tractor.

At least a dozen officers and nine vehicles were dispatched from the Charles County Sheriff’s Department. In addition, they launched a drone, which got caught in the tree in a lot across the street and had to be cut down. A fire truck from the Bryan’s Road volunteer fire department also was on the scene.

Dominion Cove Point, LLP, which owns the site on Bryans Rd., wants to build a compressor station there, which it says will help supply gas to the Mattawoman power plant in Brandywine and Washington Gas & Light service. Opponents, however, say that the compressor station is located on the only pipeline to supply the newly operational Dominion Cove Point, which exports liquefied natural gas (LNG) to Japan and India. It would have more than enough capacity to supply the power plant, WG&L and the export terminal combined.

Canavan, who lives 1.5 miles away from the site, believes that a compressor station—turbines which push gas through a pipeline at high pressure–located so close to people would be “dangerous.” It would also pose risks to the community by emitting carcinogenic pollutants. The road, she argues, doesn’t provide good access in case of emergency, and she pointed out that it was flooded that very morning. There are no nearby fire hydrants.

Canavan’s parents live less than half a mile from the site. A year ago, a large out-building on their property burned down completely because fire departments couldn’t get water there. Similar fires have happened in the neighboring area recently. 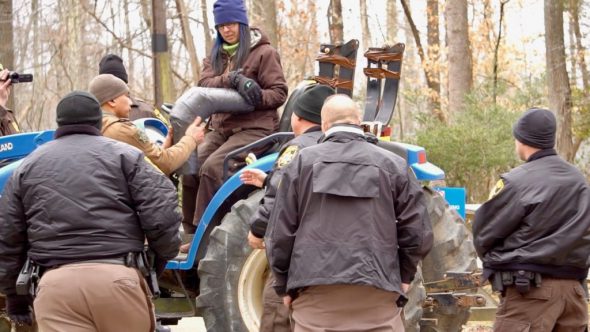 Canavan winces when a police officer tugs on the lockbox sleeve./Photo by Anne Meador

To operate an industrial facility in a residential area, Dominion has applied for a special exception to zoning rules. A seventh Board of Appeals hearing on the issue is scheduled for the evening of March 13. The board has yet to grant a Dominion permit, and an application is also pending with the Maryland Department of the Environment. A federal agency gave permission to clear-cut 13.3 acres of trees on the site.

“All I really want is for them to not do this until the BOA gets to make its decision,” Canavan told police.

Law enforcement officers tried to persuade her to leave and threatened her with arrest. MCPL McCue, the first officer in command on the scene, said the tractor–her father’s–was at risk of impoundment. Law enforcement strategized how to cut the device off her.

As several vehicles lined up and hours began to pass, one deputy continued to engage Canavan in conversation and challenge whether she had pursued all available options first. His grandparents, he said, were participants in the civil rights movement, and he debated members of the group on effective strategies to achieve goals.

Meanwhile, fed-up workers abandoned vehicles and carried in chain saws and equipment around the tractor so they could work.

At 9:30 am, police gave the first warning to disperse and cordoned off the area. At the third warning at 10 am, Canavan agreed to unlock herself and to allow police to escort her as she drove the tractor home. As she chugged up the hill, the steering malfunctioned, and the tractor veered off to the side of the road. With the police escort, she had to wait for assistance to make repairs.

The seventh hearing on the special exception permit by the County Board of Appeals will be held on March 13. The Maryland Department of the Environment is holding a hearing on March 28 to take comments on Dominion’s application for a Permit-To-Construct. 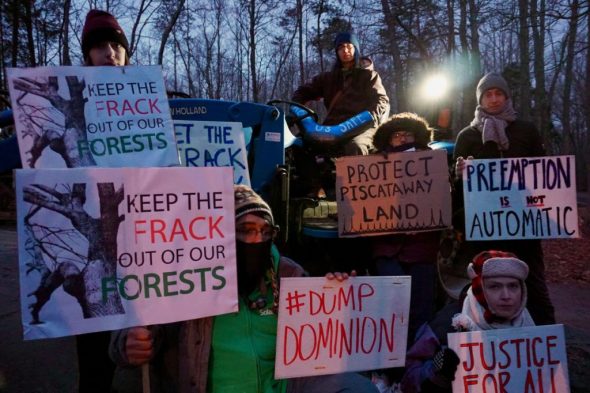