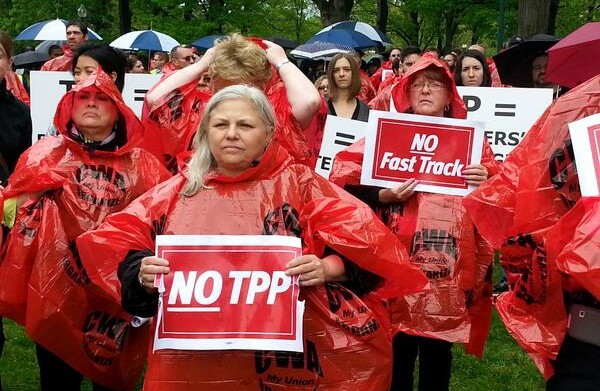 Each year, Labor Day serves as a reminder of the contributions that American workers have made to our country’s strength, prosperity and well-being. It falls around the time that members of Congress start to return from recess in their districts to Washington, D.C. This Labor Day, we want our representatives to get back to work with one thing in mind: Their first priority must be to protect Florida’s quality of life, including our jobs, wages, communities and environment.

Sadly, members of Congress — and the public they are supposed to represent — are being left out of important talks about a trade deal that could end up costing us our jobs and wages while jeopardizing our clean air and water.

That deal, the Trans-Pacific Partnership, or TPP, is a massive trade pact being negotiated behind closed doors between the United States and 11 other countries — including Mexico, Canada, Japan and Vietnam.

Trade can be a good thing if done responsibly. But what we know from a history of failed free-trade pacts, and from what we’ve seen in leaked chapters of the trade text, the TPP will lead us in the wrong direction by off-shoring our jobs, eroding our wages, gutting environmental and consumer protections, and increasing our exposure to unsafe food.

We already know that so-called “free” trade agreements aren’t free — they hurt jobs and wages and are deeply irresponsible. Indeed, just two past “free” trade deals, NAFTA and China’s addition to the World Trade Organization, resulted in a net loss of almost 135,000 Florida jobs. In addition, when — and if — those workers got another job, their annual wages plummeted an average $13,500. That net loss cost Florida’s economy almost $2 billion in annual wages. The TPP will make things even worse because we’ll be competing with corporations relocating to countries like Vietnam, where the average minimum wage is a meager 56 cents per hour.

This agreement will allow foreign corporations to sue the United States through international tribunals over nearly any laws that they allege would cut into their expected future profits. That includes laws designed to protect the air we breathe, the water we drink, and the food on our dinner tables. Florida’s taxpayers shouldn’t have to pay the tab to defend American laws against foreign corporations using secret court systems.

And it gets worse. A number of groups, including AARP and Consumers Union, wrote a letter stating that the TPP would lead to higher prescription drug prices, placing important Medicare and Medicaid programs at risk. The higher drug prices are the product of language in the TPP that extends the patent monopolies held by big drug companies.

Even the food you eat is not safe. The FDA has detained hundreds of seafood products from TPP countries due to salmonella and E. coli. The TPP will further swamp an FDA that is only able to inspect 2 percent of seafood imports under current conditions. If the TPP becomes a reality, more cheap and tainted food imports are likely to make it to our shelves, sinking Florida’s shrimping businesses that provide us with a safe and healthy catch.

It comes as no surprise that the American people are not fooled by these irresponsible trade agreements. According to a bipartisan poll ( fasttrackpoll.info), 62 percent of voters oppose giving President Obama “fast track” authority over the TPP. With fast track, Congress would not be allowed to make any changes to the deal before it’s signed. This is such a bad deal that 43 percent of voters — including 68 percent of Republicans, 17 percent of Democrats, and 48 percent of Independents — said that they would be less likely to vote for a member of Congress who supported fast track.

The legislative fight over the TPP may come to a head during the lame-duck session following the November elections, when members are expected to introduce a new proposal for fast track.

We hope that each member of the Florida congressional delegation will join us in the fight to protect our jobs, wages, environment, food, prescription drugs, health and national sovereignty, and show their support for responsible trade, by making a public commitment to oppose fast tracking the Trans-Pacific Partnership.

Drew Martin is the conservation chair of the Sierra Club’s Loxahatchee Group. Bill Eberhardt is the Florida legislative-political coordinator for the Communications Workers of America.