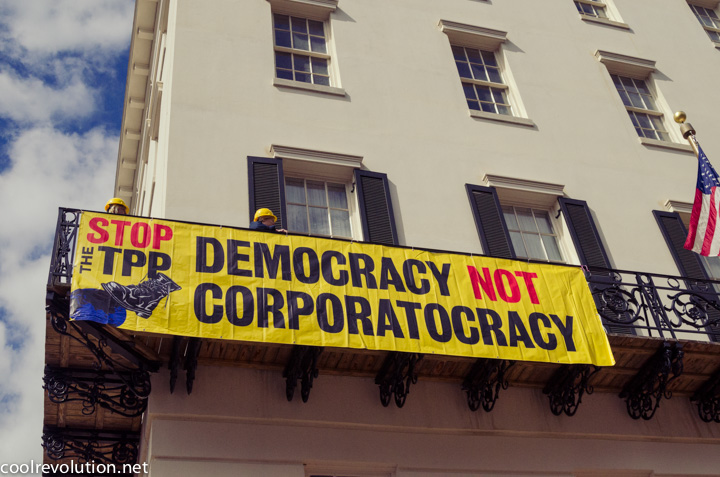 Trade Agreements Reveal How Life Will Be Organized In 2050

The U.S. is negotiating two huge problematic trade agreements — one with Europe (TTIP), and another with countries around the Pacific (TTP). Both dramatically extend the NAFTA model.

In simple terms, trade agreements are about trade — exports and imports. However, these trade agreements also serve as political, social, cultural and moral documents, which set political and social standards for countries and communities.

In contrast, trade agreements look like a corporate Bill of Rights, full of protections for investors and global corporations, enforced by special courts or tribunals. NAFTA, TTP and TTIP offer lip service and vague promises to people and communities.

The shadowy trade tribunals are fundamentally different from courts and legal principles we are familiar with in America and Europe.

Trade tribunals seek maximum possible trade and maximum opportunities for investors. They are blind to public good or public interest.

Under NAFTA, TPP and TTIP, global corporations who are unhappy with some court decision — even one from our Supreme Court — can take that issue to a sympathetic corporate-dominated trade tribunal.

The other day, I heard a trade negotiator from the European Union speak about TTP and TTIP. He said TTP and TTIP would set the Gold Standard for global governance. They would facilitate the life of global business for a generation. These agreements would determine the way life is organized in 2050.

He assured the audience that public interest would be respected. Neither Europe nor America would compromise rights we had earned over centuries of democratic tradition. He sounded sincere.

The trade negotiator is diplomat. I am a scientist. To me, his diplomatic assurance about balanced interests is a testable hypothesis.

We can see where this is going. Corporate rights will deny life-saving medicine to millions of people in Africa and Asia. Currency manipulation will continue to put American workers at risk, while global companies move manufacturing to low-wage countries with weak social protections.

The diplomat defended the agreements, saying that countries would always have the final say in their democratic governments and courts.

Really? Australia’s High Court (their equivalent to our Supreme Court) had legitimately approved the regulations for cigarette packages. Ecuador’s legitimate environmental process had run its full course. Canada’s environmental concerns are also legitimate and prudent. All of these democratically-formed policies are subject to review by corporate-dominated international trade tribunals.

When a trade tribunal over-rules a domestic policy it can impose enormous economic penalties that put an unbearable price tag on national or local policies designed to serve public interest.

In practice, trade tribunals have the final say.

Joseph Stiglitz, a Nobel laureate and former chief economist at the World Bank, calls this “global governance without global government.” It’s a 21st century version of what the East India Company did, centuries ago.

Here is a basic fact about trade policy: “The deal” in a trade agreement is, “You can have access to our markets, and in exchange, you will agree to certain rules for managing trade.”

Once we make that deal, other countries will have access to our markets. We can’t come back and say, “Wait! We meant to include the environment, human rights, labor rights, public health, immigration, and prudent financial regulation.” It’s done.

These agreements will, indeed, determine how we organize life in 2050.

We could have good trade policies that raise living standards, and balance investor interests with public interests. Trade agreements could respect the social and political interests of workers, communities, social stability, and the planet. Our trade policy could reflect the democratic traditions we built over 200 years in America and Europe.

Of course that would be a very different trade policy from the NAFTA model we have, now.

This is much more than an economic decision about tariffs or exports or imports. This is a political, social, cultural and moral decision about our place in the world.