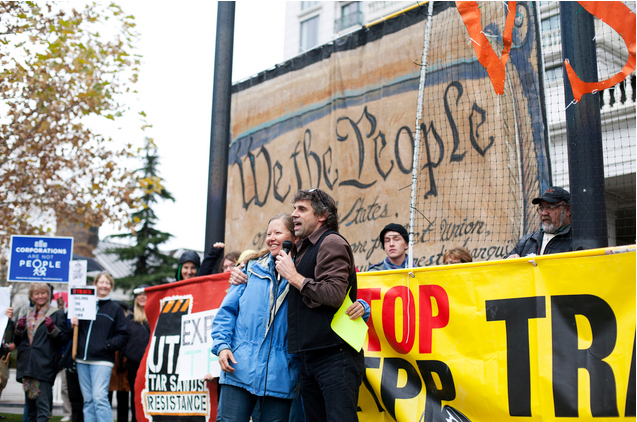 Note: The negotiators of the Trans-Pacific Partnership thought they would go to Salt Lake City, UT and not find protesters. Well, they were wrong about that.  A strong crowd came out to the hotel where the negotiators are meeting, putting forth a clear message of opposition to the TPP and the secret negotiations that produced it.   Those coming out against the TPP included labor, environment, Internet and justice activists; including the popular former mayor of Salt Lake City, Rocky Anderson. Protests are planned all week.

Perhaps the most hilarious and embarrassing comment in the article below came from Carol Guthrie, the senior adviser for media affairs of the Office of the U.S. Trade Representative, who said the treaty had been negotiated with “unprecedented transparency.” Ms. Guthrie showed the world today that the US Trade Reps office cannot be trusted.

The TPP is actually the most secret negotiation ever in the history of trade agreements. Today, Bloomberg News editorialized that Obama’s secrecy is destroying the trade agreement.  They have even classified the text so that members of Congress, who go through the process of seeing the text, cannot discuss it with their constituents. Members cannot even bring staff to see it, take notes or bring a computer or camera.  Ms. Guthrie calls that “unprecedented transparency.”  Does she think anyone will believe anything she says in the future?

The Washington Post, normally a very pro-trade agreement newspaper, wrote this week about the Wikileaks disclosure that “it is obvious why the USTR and the Obama administration have insisted on secrecy. From this text it appears that the U.S. administration is negotiating for intellectual property provisions that it knows it could not achieve through an open democratic process.”

Note to Ms. Guthrie — everyone knows this is a secret agreement.  When you try to mislead us with such obvious lies you destroy not only your credibility but the credibility of the Office of the US Trade Representative.

Note to others, if the US Trade Representative needs to tell such obvious lies it is a sign of their desperation and insecurity. They have good reason to be insecure. If they really want to be open they should do as previous administrations have done and publish the text. In addition they should publish the positions the Obama administration is putting forward on our behalf. The US Trade Rep. tells the media this is a “high quality” agreement, yet they keep it secret.

There will be a week of protests ending with a funeral for the TPP on Friday.  This is an apt finale as the TPP is struggling on its death bed.  Three-quarters of Democrats wrote President Obama this week telling him they were opposed to granting Fast Track Trade Promotion Authority to him.  And Republicans — including moderates, conservatives and Tea Party members — also sent a letter opposing Fast Track. Without Fast Track the Administration will be unable to pass any trade agreement.

The message: scrap the TPP and the Atlantic agreement, TAFTA, and start all over with a transparent process that includes civil society and Congress in the process, and works for Fair Trade that puts people and planet before profits. The TPP is running into a dead end and the Administration should stop wasting time pursuing this failed global corporate coup.

The article below is from the Salt Lake City Tribune.

Pacific Rim Representatives from 12 nations begin new round of negotiations; Joined by protesters opposed to TPP

Inside, top trade negotiators from the United States and 11 other Pacific Rim nations perhaps discussed imports and exports, profits and products, prices and patents. The exact topics aren’t known. The talks were closed.

And that concerns critics most of all as parties from the Trans-Pacific Partnership launched a 19th round of negotiations — this time in Utah — in search of a sweeping free-trade agreement.

Tuesday’s rally, organized by a coalition called the Citizens Trade Campaign, of Washington, D.C., drew 100 or so protesters, who worry that the high-level talks have been conducted behind closed doors with only multinational corporations given access to proposed provisions.

Watched over by a small contingent of Salt Lake City police and other security officers, demonstrators carried various signs on the lawn and sidewalk in front of the hotel. Among them: “Protect Us From Corporate Protectionism,” “Obama: Exorcise Your Corporate Demons” and “Mormon Environmental Stewardship Alliance.”

One group held a U.S. flag, with the stars replaced by corporate logos such as those for McDonald’s, CBS, Coca-Cola and Microsoft.

Cox pointed to the North American Free Trade Agreement as a model for the proposed Pacific accord, which he warned would lead to the loss of more U.S. jobs.

“They’re here to take jobs from us to other countries,” Cox said.

Holland echoed those remarks, saying, “We cannot allow NAFTA in the Pacific.”

“That’s what people don’t understand about these trade agreements,” Cordray said in an interview. ” … They can actually take away some of the sovereignty that we have in our local communities.”

Carol Guthrie, senior adviser for media affairs of the Office of the U.S. Trade Representative, which is negotiating for the United States, said her office had worked hard to introduce “unprecedented transparency” into the negotiations. She also touted the importance of foreign trade to Utah jobs.

Groups plan to protest throughout the week, with the talks set to last through Sunday.