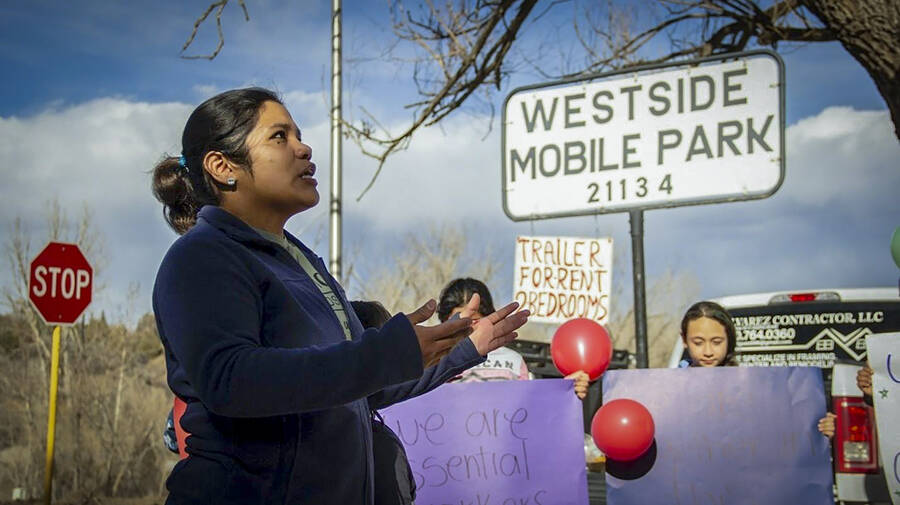 As Gentrification Sweeps The West, Investors Are Buying Up Mobile Home Parks.

Residents Of This Colorado Park Got Together And Bought It Themselves.

Durango, Colorado - On a cold January day at the height of ski season, as tourists check into Durango’s resort hotels and wealthy vacationers roll suitcases into their second homes, Alejandra Chavez pulls away from her single wide trailer on the outskirts of town and drives the two-lane road south to look for a new place to live in New Mexico. Chavez dreads the prospect of making this same 1.5‑hour-drive, back and forth, every day, but she sees few options. Her work is in Durango, but Durango, it seems, may no longer have a home for her.

Chavez, 30, moved to the area 18 years ago to join her parents, who fled economic desolation in Mexico and found work in Durango. In 2008, the family bought their trailer in Westside Mobile Home Park for $12,000. It was in rough shape, but Chavez’s father, who owns a construction company, spent years and some $20,000 renovating it into a comfortable home. Westside, Chavez says, has been a good place to live — a neighborhood where Latino, Native American and white families raise their kids together.

As is common in trailer parks, however, the Chavezes and most of their neighbors own their homes but not the land beneath them. In December 2021, they received notice that the park was for sale. Chavez pictured their homes being torn down to make way for a hotel, a gas station or some other amenity for ski resort-goers. Or their homes might simply become unaffordable: In recent years, an inrush of tourists, remote workers and investors has driven land and housing prices out of control in Durango and across the West. The park’s prospective buyer, Harmony Communities, raised lot rents by 50 percent when it bought a trailer park in Golden, Colo., in 2021.

Chavez and the other Westside residents saw one other option — one way to turn private tragedy into collective victory. On Jan. 14, residents formed a cooperative, elected representatives (including Chavez to the role of vice president), and voted to try to buy the park themselves.

The $5.46 million asking price was daunting, but residents knew the cost of failure. Chavez has friends who pile in six to a car and drive 2.5‑hour commutes to Durango from cheaper towns in New Mexico, casualties of this new, outdoorsy form of gentrification.

The land rush has not spared mobile home parks, which speculators buy up as investment properties. Two such investors even started “Mobile Home University” (MHU) to sell online courses in how to do it. In a blog post titled “How to Make Huge Returns on Mobile Home Parks,” MHU co-founder Frank Rolfe sums up the strategy: “It costs $3,000 to move a mobile home.… As a result, tenants cannot leave when you raise their rents.”

Thanks to a new Colorado law, however, IQ Mobile Home Parks, the New York-based company that owns Westside, had to give residents notice of its intent to sell and 90 days to make their own offer. And Westside residents had a model: In June 2021, residents of Animas View Mobile Home Park across town bought their park with guidance from ROC USA, a program that connects trailer park residents to financing so they can buy and run their parks cooperatively. The Animas View website lists some of the benefits of self-ownership: “There is no profit margin in your rent” and “no commercial owner who can decide to close the community.”

On March 15, with Denver-based Elevation Community Land Trust (ECLT) negotiating on their behalf, Westside residents made an offer at asking price, contingent on financing. IQ rejected it in favor of Harmony’s cash offer, but gave residents a week to come up with a cash offer of their own, according to Stefka Fanchi, president and CEO of ECLT. Residents launched a GoFundMe and hosted a fundraising dinner, bringing in nearly $50,000 in a few days. La Plata County, the Colorado Impact Development Fund, the Local First Foundation and ECLT offered loans and grants to cover the rest. On March 31, after what Fanchi called “a miraculous act of financial gymnastics,” IQ accepted the offer.

Michael Peirce thinks it shouldn’t take a miracle for residents to be able to buy their own parks. Peirce is project manager for the Colorado Coalition of Manufactured Home Owners (CoCoMHO) and president of the resident co-op that bought Sans Souci park outside Boulder in June 2021. But such successes are the exception: Of the 68 parks that have sold since Colorado’s opportunity-to-purchase program took effect in 2020, only four (including Westside) have been successfully purchased by residents. To lower the barriers, CoCoMHO is supporting a bill in the Colorado legislature that would extend the offer timeline to 180 days and impose penalties on owners who don’t negotiate in good faith.

In the meantime, Chavez offers this encouragement to other trailer park residents interested in buying their parks: “Look out for each other. Ask your community for help. If we did it, I’m pretty sure others can.”