Training Bias Out Of Teachers

This summer, the Des Moines, Iowa, public schools held a series of anti-racist town hall meetings in the wake of the police-led killings of George Floyd and Breonna Taylor and the disproportionate effects of COVID-19 on people of color in their community. But the conversation rapidly turned to inequalities within in the school system.

“I would describe it as a harsh look into the current realities of what our students and our families are saying to us around anti-racism in our schools,” said Goodrell Middle School Principal Peter LeBlanc, who noted the conversations are part of the district’s ongoing equity audit. “The foundational finding, which we call it, is our current school system is perpetuating systemic racism.”

More than 6 in 10 students in the Des Moines district are students of color, while more than 9 in 10 school employees are white, and both students and staff of color reported a lack of diversity in staffing and curriculum, as well as inequitable school policies and practices. Data backed them up; for example, Black and Hispanic graduation rates in Des Moines still trail those of white and Asian students.

LeBlanc was tapped for special assignment to lead the district’s efforts to recruit more diverse teachers and staff and to train existing staff to avoid the unconscious racial and other biases that could affect their relationships with students. It’s work that thousands of districts have taken up in the wake of rising calls for racial justice in the education system and beyond. California’s education department announced this summer it would require all of its employees to go through implicit-bias training and to provide guidance to districts on doing the same. Michigan and Kentucky are considering similar training for their teachers.

There’s just one problem: It’s not at all clear from research what kind of anti-bias training works.

Several large-scale analyses of research on implicit-bias training suggest it more often changes short-term knowledge about the vocabulary of diversity than long-term changes in behavior. Several specific common strategies—such as thinking positive thoughts about stereotyped groups, meditating or making decisions more “slowly” to avoid stereotypes, or simply being aware of the possibility of implicit biases while making decisions—have all so far failed to show benefits that last even a day or two.

In some cases, diversity and anti-bias training can paradoxically lead to more stereotyping, if participants come to think of biases as common and uncontrollable, and can lead white participants to feel threatened without yielding benefits for participants of color. Rather, evidence suggests staff training can be helpful, but only as part of a comprehensive strategy that includes identifying specific problems and strategies to address structures that perpetuate bias in a school system. 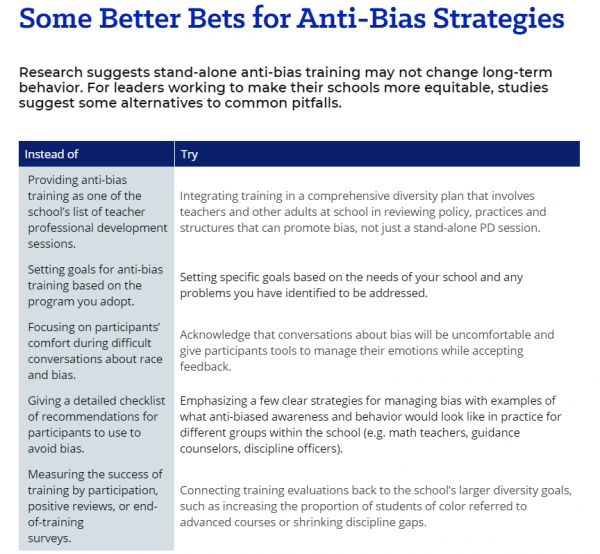 “We can’t look at equity, not as a standalone thing where we say OK, let’s do professional development around equity,” LeBlanc said. “We’re mobilizing the anti-racist leadership team out of all of the different departments to help look at current practices, current processes, to see how we can make improvements to the system.”

How does implicit bias work?

More than two decades of research has made clear that most people do have unconscious or “implicit” biases, developed from years of social stereotypes about race, gender, age, or even which colors or foods typically go together. It’s a kind of mental shorthand that can lead people to think or behave in biased ways even when they don’t explicitly espouse prejudiced ideology.

Regardless of intent, these unconscious biases can harm students. Studies have found Black boys and girls as young as 10 are routinely seen as older, more sexualized, and more likely to be guilty of crimes than their white peers. In one experiment, white female college students who were shown photos of Black boys thought they were on average 4.5 years older than they were, and when photos of children of different races were shown with descriptions of crimes, Black students were more likely to be assumed guilty than white or Latino students, particularly for felonies. Student-teachers, in a separate study, were more likely to view Black children’s expressions as “angry” compared to those of white children.

Teachers are as likely to show racial biases as any other American adults. One large, nationally representative study this spring found no meaningful differences in explicit or implicit racial bias between teachers and non-teachers. Over a series of experiments, researchers found as many as 77 percent of both groups held an unconscious preference for white over Black people, and as many as 30 percent explicitly preferred white over Black people.

If not anti-bias training, what does work?

With the sheer number of districts trying to use anti-bias training, districts may be able to help build better evidence about what works by tying their training programs to explicit outcomes, such as more diverse staff recruitment and retention or more racially proportionate student discipline referrals. But in the meantime, experts are also exploring other approaches to short-circuit the connection between the mental shortcut of implicit bias and harmful discriminatory behavior.

Among all the anti-bias efforts that have been tried and tested, some more concrete and targeted interventions—as opposed to those targeting general anti-bias awareness—have shown evidence of effectiveness. For example, people are more likely to make decisions and act based on unconscious racial biases when they are stressed and when they have limited other information about a person. One intervention to address this—which taught teachers classroom management techniques, self-regulation, and strategies to react to misbehavior from students with empathy—reduced disproportionate numbers of office referrals for Black boys by two-thirds and increased Black boys’ reported feelings of connection to the school.

Anthony Greenwald and colleagues at the University of Washington are also exploring ways that school districts can eliminate discretion in systems at times when it might increase bias. That doesn’t mean ignoring a teacher’s professional expertise, but it might, for example, mean using technology platforms to allow teachers to grade students’ work anonymously, or allow groups of teachers to review discipline reports without knowing the identifying features of the students involved.

LeBlanc in Des Moines said he is coupling staff training with teacher and administrator equity groups who are working together to use the schools’ data to identify how to diversify the teaching force with new hires and to start working through school policies around discipline and other issues that may lead students to feel disconnected from their teachers and schools. (The work in Des Moines is supported by the Wallace Foundation, which also supports Education Week’s coverage of issues including education leadership, summer learning, social and emotional learning, arts learning, and afterschool.) Getting teachers involved in the broader conversation of how to fix school policies helps them feel more ownership of the changes.

In a study of 30 years of data on diversity initiatives from 800 U.S. companies, analysts from the Harvard Business Review found mandatory or “controlling” training did not lead to improvements in actual behavior or diversity, particularly when the training came in reaction to a negative event (like a lawsuit or scandal involving disproportionate discipline). By contrast, more-effective business diversity programs:

One meta-analysis published last month of anti-bias interventions on more than 20,000 people highlighted one thing that does tend to counteract unconscious bias: exposing yourself to people who defy those stereotypes.

Nancy Gutiérrez, the president of the New York City Leadership Academy, found schools that do provide anti-bias training can benefit from using interracial teams to lead the conversations, to provide broader perspectives and to prevent individual teachers of color from becoming overly called on to represent their racial or ethnic groups.

“There’s a lot of will, a lot of desire out there right now to do something … but I think that sometimes we overestimate our skill to facilitate this work,” Gutiérrez said. “When you’re talking about race and identity, you’d have to be at the intersections of who we are as people, and that takes a lot of planning and careful facilitation to truly engage in ways that will open up and deepen the conversation rather than shut it down.”