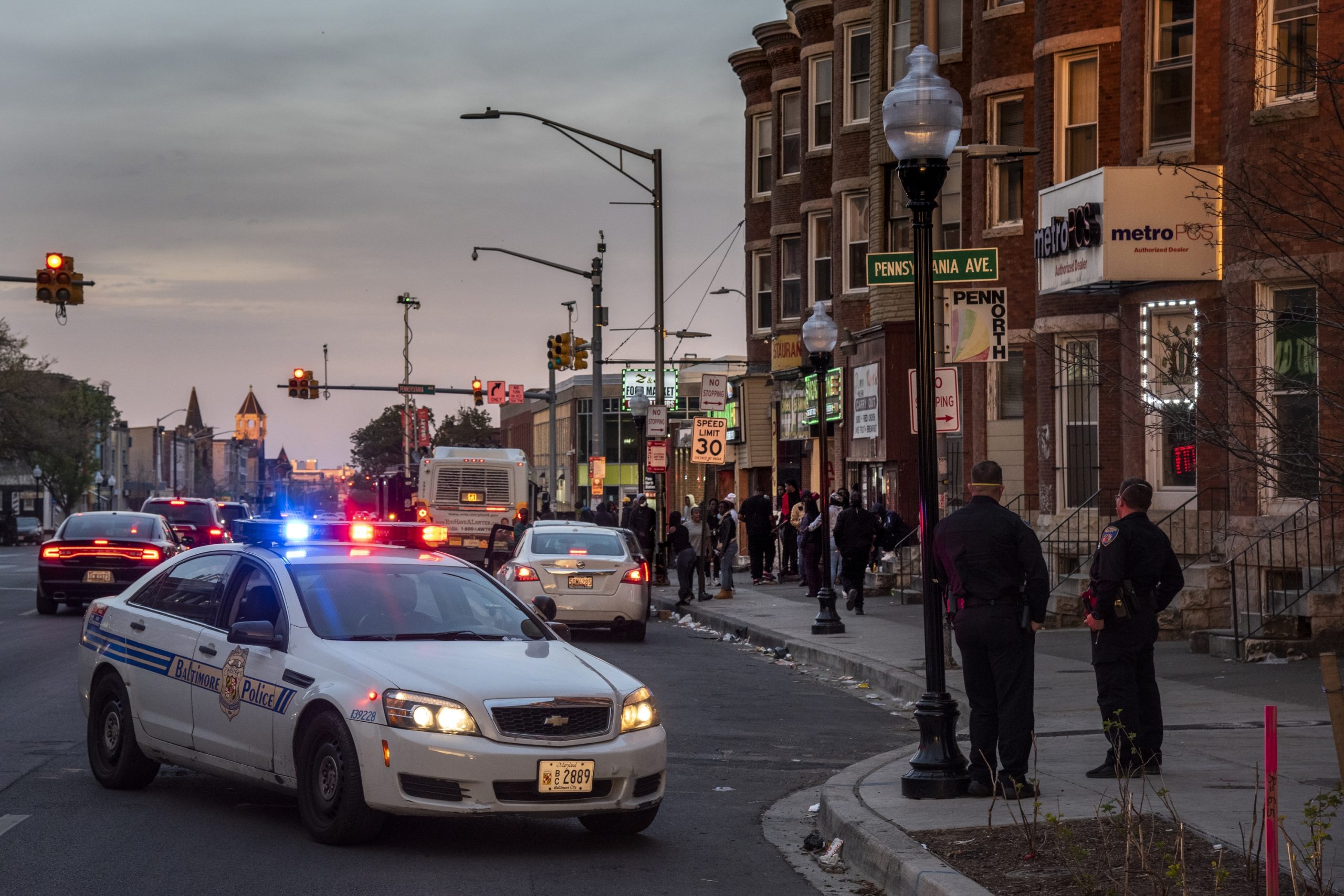 Above Photo: From a distance, Baltimore police officers watch an argument on W. North Avenue near Pennsylvania Avenue in West Baltimore, Maryland, on Sunday, April 19, 2020. Jahi Chikwendiu / The Washington Post via Getty Images.

Back in April 2016, a Baltimore news report about “police recruiting perils after Freddie Gray”  focused on a new police hire with an ideal origin story. Luke Shelley, a National Guardsman deployed here during the Baltimore Uprising in April 2015, had recently joined the Baltimore Police Department (BPD). As a guardsman, he had been stationed at Mondawmin Mall, ground zero for the rioting that took place on April 27, 2015, “an experience that convinced [Shelley] he wanted to serve the city,” local ABC affiliate WMAR reported.

“I want to be where the challenge is and where the need is for good police,” Shelley told WMAR in 2016. “To have that impact on countless lives—a hundred or a thousand or whoever you meet on a daily basis—I think is a pretty noble and high responsibility.”

Less than a month after the 2019 photo was posted, two police officers in Shelley’s unit became increasingly disturbed by his behavior and would later demand they work with someone other than Shelley because he was “no longer fit to be trusted” and had exhibited what they called “bias[ed] practices.”

That’s one of many allegations against Shelley contained in his disciplinary records, which were leaked to Battleground Baltimore.

Since joining the police in February 2016, Shelley has developed a reputation among Black Baltimoreans as an especially aggressive cop, first while on patrol, and more recently as a member of the District Action Team (DAT) in the Western District, the police district where Freddie Gray lived and died.

In a 2021 report, the ACLU of MD noted the high number of complaints Shelley racked up in a relatively short amount of time. In his first three years and eight months on the job, Shelley had 28 complaints against him and 67 documented uses of force, including at least 11 for “pointing a firearm,” 21 for “hands,” and 6 for “takedowns,” including one “takedown with injuries.” At least nine times, someone who encountered Shelley went to the hospital to be examined for possible injuries.

In September 2017, Shelley was in a police vehicle with Officer Benjamin Brown who, according to a police report, “failed to place a seatbelt on [a man who was arrested] after placing him in the rear of a patrol car.”

According to the man, Shelley “began to drive reckless, running red lights with the siren activated” and “slammed on the brakes which caused [the man] to be thrown forward into the rear of the front passenger seat.” When Shelley accelerated again, the man “hit his back on the rear seat.” Along with Shelley and Brown, there were two other cops in the car at the time.

When the man finally arrived at the Western District police station, he “complained that his back, neck, and wrist was injured from [a] rough ride in the police vehicle because he was not in a seat belt.” He was taken to the hospital and “treated for a muscle strain.”

Police found complaints of “neglect” against Shelley to be “not sustained.” A sustained complaint is one believed by the police who investigated an allegation to have happened, and to have violated police policy. A complaint that is “not sustained,” as described by the 2016 Department of Justice report on Baltimore Police, “means that investigators were unable to tell either way.”

According to police, body-worn camera footage from Brown “shows that Shelley did not drive in an unsafe manner and that [the man] purposely threw his body into Officer Brown who was sitting next to him in [the] rear area of the police vehicle.”

Documents show Brown refused to provide a recorded statement. Allegations of “neglect” against Brown were sustained. In July 2018, Brown resigned from BPD.