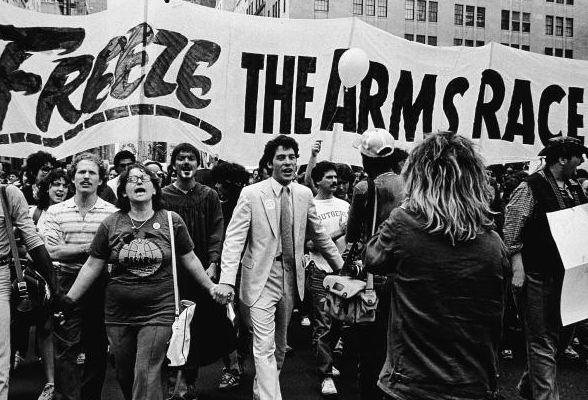 Note: Despite the reality that nuclear energy is not a clean energy, the corporate media continues to push the falsehood that it is a solution to climate change. From its excavation, production of energy and waste, nuclear is a dirty energy. Nuclear has become much more expensive than true clean energy sources — sun, wind and water — and it is very slow to come on the market with a nuclear plant taking more than a decade to produce. We are much better off spending our resources on increasing efficiency, decreasing waste and transforming to a carbon-free, nuclear-free energy economy. There are numerous reports on how we can to this that show we do not need nuclear energy. KZ

When the Washington Post and New York Times are making the same corporate-friendly point, it’s safe to assume that some PR agency somewhere is earning its substantial fees.

In this case, the subject is the need for nuclear power—and, for the Post editorial board (4/18/16), for fracking as well. Standing in the way of this in the Post’s version is favorite target Bernie Sanders, while the Times business columnist Eduardo Porter (4/19/16)  blames the “scientific phobias and taboos” of “progressive environmentalists.”

“While campaigning in New York, Mr. Sanders has played up his opposition to nuclear power,” the Post editorialists wrote, citing his contention that the Indian River nuclear plant, 25 miles from Manhattan, is a “catastrophe waiting to happen.” Sanders’ “criticism came as little surprise,” the Post declared; “he had already promised to phase out nuclear power nationwide by steadily retiring existing reactors.”

“If we are serious about global warming, we will ignore Mr. Sanders’ sloganeering,” the paper urged. “Nuclear accounts for about a fifth of the country’s electricity, and it is practically emissions-free.”

In reality, nuclear power is not emissions-free; the process of mining and enriching uranium fuel, along with constructing nuclear plants, operating backup generators during reactor downtime, disposal of nuclear waste and eventual decommissioning of plants all contribute to greenhouse gas emissions. According to an analysis published by the journal Nature (9/24/08), nuclear power does produce 14 times less in greenhouse gas emissions than coal, and seven times less than natural gas—but twice as much as solar cells and seven times as much as onshore wind farms. For halting climate change, in other words, there are more serious options than nuclear.

Shutting down that much clean electricity generation would put the country into a deep emissions hole. Mr. Sanders argues that he will invest heavily in renewables. Yet every dollar spent to replace one carbon-free source with another is a dollar that could have been spent replacing dangerous and dirty coal plants. Under Mr. Sanders’ vision, either the country would fail to maximize emissions cuts, or it would waste huge amounts of money unnecessarily replacing nuclear plants.

Sanders actually favors “a moratorium on nuclear power plant license renewals in the United States”—in other words, as the Post had earlier described it more accurately, “phas[ing] out nuclear power nationwide by steadily retiring existing reactors.” So it’s not a question of using money to replace a nuclear plant that could have gone to replacing a coal plant; the nuclear plants need to be replaced with something when they reach the end of their useful lives.

And if you put that money into renewables rather than into a new nuclear plant, you can reduce emissions more quickly. The investment bank Lazard analyzes the “levelized cost of energy”—the cost of building and operating an electrical plant per unit of electricity produced. In its latest report (11/15), the bank found that nuclear’s LCOE ranged from $97 to $136 per megawatt-hour, while wind costs between $32 and $77; utility-scale photovoltaic solar was priced between $50 to $70. Note that these costs for nuclear do not include the decommissioning of obsolete plants, which can add $1 billion–$4 billion to the lifetime cost, nor the cost of accidents like the Fukushima meltdown, which is expected to cost Japan some $300 billion (Renewable Energy World,4/28/16).

The Post concluded that the best bet would be to put a tax on carbon, then “let the market find the fastest and most efficient road to slowing the warming of the planet.” The irony is that if you had a truly market-driven energy system, there’d be no need for a moratorium on nuclear licenses; if you didn’t have thePrice-Anderson Act capping industry liability for nuclear accidents—requiring it to pay less than 2 cents on the dollar of the projected costs—it’s unlikely that another plant would ever be built.

Meanwhile, at the New York Times, Eduardo Porter was defending nuclear power—“the only technology with an established track record of generating electricity at scale while emitting virtually no greenhouse gases,” as we’ve debunked above—against an even scarier foe than Bernie Sanders: “the left” as a whole and its “scientific and technological taboos.”

Brought in as an expert witness to make this case is the internet entrepreneur who once complained that “anti-colonialism has been economically catastrophic for the Indian people for decades”:

“The left is turning anti-science,” Marc Andreessen, the creator of Netscape who as a venture capitalist has become one of the most prominent thinkers of Silicon Valley, told me not long ago. He was reflecting broadly about science and technology. His concerns ranged from liberals’ fear of genetically modified organisms to their mistrust of technology’s displacement of workers in some industries. “San Francisco is an interesting case,” he noted. “The left has become reactionary.”

So far, the major achievement of GMO technology has been to boost 15-fold the use of Monsanto’s Roundup herbicide—which Monsanto’s seeds are engineered to be resistant to. Since the active ingredient in Roundup has been declared by the World Health Organization’s cancer researchers to be a probable human carcinogen, fear is not necessarily an unscientific reaction.

As for technology’s displacement of workers in San Francisco, that’s where one of Andreessen’s fellow tech entrepreneurs wrote an open letter complaining, “I shouldn’t have to see the pain, struggle and despair of homeless people to and from my way to work every day.” To be revolted by such attitudes is not “reactionary,” and you don’t need to be “anti-science” to be concerned that the soaring profits of the high-tech industry are pricing workers out of their homes.

But wrapping political and ethical choices in the mantle of “science” is what Porter’s column is all about—comparing to climate change denial the left’s failure to accept the “scientific consensus” on nuclear power, meaning that 65 percent of scientists favored building more nuclear plants in a Pew poll. The difference between an actual scientific consensus on the physical fact of global warming and a political preference expressed by two out of three scientists for a particular energy policy ought to be obvious; conflating the two is doing the opposite of what Porter claims to be advocating for, which is “somehow disassociating the scientific facts from deeply rooted preferences about the world we want to live in.”

The Times column offered some pre-emptive criticism of its own analysis: “Highlighting the left’s biases may seem like a pointless effort to apportion equal blame along ideological lines.” It’s not pointless at all, though: It’s a great way to sell pro-corporate policies under the guise of objective truth.