Last month, the Maryland Board of Public Works voted unanimously to deny TransCanada an easement to put its fracked gas pipeline under the Potomac River just west of Hancock, Maryland.

The decision dealt a major blow to not just TransCanada, but to the Mountaineer Gas pipeline in West Virginia, which TransCanada would have fed with fracked natural gas, and to the proposed Rockwool insulation factory in Jefferson County, which was banking on the gas to fuel its furnaces.

It was a victory for anti-pipeline activists.

And then the question became – what are TransCanada’s and Mountaineer’s next moves?

Rumors had it that TransCanada was going to litigate the case in the courts.

But still, no word from TransCanada.

Turns out that TransCanada is waiting until the Maryland legislature adjourns on April 4.

Earlier this month, someone at the Economic Development Authority messaged TransCanada’s Brittany Carns asking her about the company’s plans.

The message was obtained through the Freedom of Information Act by Tracy Cannon of Eastern Panhandle Protectors, Brent Walls of the Potomac Riverkeeper Network and Regina Hendrix of the West Virginia Sierra Club.

“Hi Brittany. Anything new on the ROW (right of way) in Maryland?” the EDA person wrote. “I have an EDA meeting Tuesday in Morgan County. I am sure to get questions. Can you share any news to make the Eastern Panhandle feel better about the delay?” 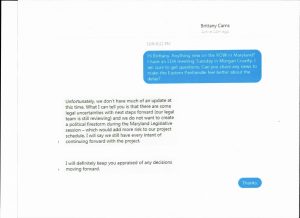 “There are some uncertainties with next steps forward (our legal team is still reviewing) and we do not want to create a political firestorm during the Maryland Legislative session – which would add more risk to our project schedule,” Carns wrote back. “I would say we still have every intent on continuing forward with this project.”

Also last month, a group of citizens wanted some answers from Mountaineer Gas about what Mountaineer’s next steps were.

The pipeline in Morgan County is already built. What are you going to do with the pipeline without any gas coming under the Potomac River?

As there is now a chance that the connecting pipe will not be constructed by TransCanada, what is Mountaineer Gas Company’s Plan B?

“Mountaineer believes that TransCanada will continue to attempt to resolve the easement issue with the State of Maryland,” Meador wrote. “We are evaluating options for peak supply into our system in the interim and for long-term supply.”

Will your pipeline just be used to store gas for Martinsburg or is there somewhere else that you would be able to get gas from?

“The pipeline is to be put into service for distribution supply for residential and commercial customers.  As mentioned in the previous answer, we are evaluating additional supply options.”

Are there now plans for a compressor station or gas storage facility in Morgan County?

“There would be no need for a compressor station on our system. A storage system is one of the options that could be considered.”

As a follow up question, Tuttle asked, does a gas storage system mean that Mountaineer or another company will need to liquefy the gas to store it?  Do they have a location in mind for such a facility?”

“Liquify could be one way to store it,” Meador wrote. “We have not considered any location at this time.”

Cannon said that the Eastern Panhandle “would feel better about the delay” if TransCanada, Mountaineer and Rockwool cancelled their projects.