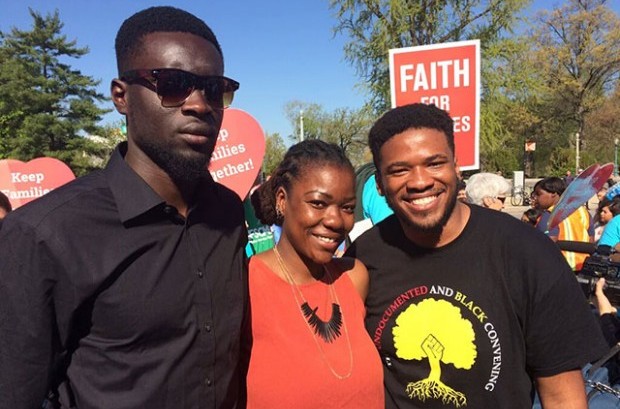 On April 18 the US Supreme Court heard oral arguments in United States v. Texas, the case challenging President Obama’s 2014 executive actions on immigration. The president’s measures are designed to protect nearly 4.5 million undocumented immigrants from deportation and allow them to apply for work permits under the expanded Deferred Action for Childhood Arrivals (DACA) and the new Deferred Action for Parents of Americans and Lawful Permanent Residents (DAPA). These actions were blocked via a lawsuit claiming an undue burden to the Texas government in issuing ID and driver’s license documents to newly eligible US residents.

However, the true motive of the legal challenge seems to be to block any portion of the 11 million undocumented immigrants currently in the United States from accessing services, from being able to navigate society with safety and dignity and from obtaining a small amount of relief from the threat of deportation. The reality is, the administration’s orders are a miniscule and temporary step toward what is really necessary: a full and robust transformation of the immigration system. Despite obstruction, a change is coming.

Starting from within the grassroots movement for immigrant rights, organizations like the Black Alliance for Just Immigration (BAJI), celebrating 10 years in existence this month, are driving that change by cultivating Black leadership. Since 2006, leading with an international and inclusive analysis focused on root causes of migration, a human rights framework and pointing out the reality of the racialized US immigration system, BAJI’s focus on Black leadership in immigrant rights as a racial justice issue is transforming the movement.

As advocates rallied outside the Supreme Court building and gathered inside the courtroom, some may or may not have noticed a marked difference in the roster of speakers and groups gathered. For years, the mainstream immigrant rights movement has been largely led by and centered on non-Black Latinos. Missing were the stories of immigrants from places such as Haiti or Cameroon, who live the reality of learning what it means to be Black once they arrive in the United States. However, the work of BAJI — tirelessly championing the voices and supporting the leadership of Black immigrants — has steadily been changing the narrative and the face of how we see immigration by centering the experience of immigrants from Africa and the Caribbean and discussing immigrant rights as a racial justice issue. The strength and success of this work was evident as members of the newly formed UndocuBlack Network rallied and spoke powerfully at the Fight for Families day of action, a campaign in support of DACA and DAPA centering around the stories of undocumented immigrants. UndocuBlack is led and organized independently by Black undocumented immigrants, many of whom are members of the Black Immigration Network, which BAJI coordinates.

The organized presence of directly affected Black immigrant leaders, celebrating their Black identity and sharing their stories of what the Supreme Court decision uniquely means to them as Black people, is both a testament to the impact of BAJI’s work and a significant landmark of what is to come. As the US population is reshaped by immigration, the Black population in particular is becoming increasingly foreign born: The foreign-born segment of the Black community is estimated to reach 16.5 percent by 2060 due to the rapid rate of immigration from Africa and the Caribbean.

Black leadership — including leadership from Black immigrants and African Americans in solidarity — will make the crucial difference in the fight for migrant rights and justice. From BAJI’s executive director, Nigerian-American Opal Tometi, co-creating Black Lives Matter, to the many Black immigrants now leading in the Fight for $15, trans inclusion and women’s rights movements, to those running for office in Black immigrant enclaves such as Baltimore, Minneapolis and Miami, Black immigrant leadership, particularly that of millennials, is having an increasingly important impact on progressive movements for social and economic justice.

Just as the civil rights movement led to the Immigration and Naturalization Act of 1965, Black leadership today will help lead to critical interventions and the necessary shift forward in the fight to change immigration policy. Similarly, in labor and women’s rights, Black folks have always been moral agitators to strengthen progressive movements. In the fight to make the US a multiracial democracy that works for everyone, not just a few, African Americans must be engaged in the fight for migrant justice, as people who have a tradition of fighting to establish full citizenship and who are similarly facing systemic discrimination.

The connecting point is most clear on issues of mass criminalization, including policing, enforcement, incarceration, detention and deportation, which acutely impact both African Americans and Black immigrants. To dismantle these parallel systems, it will take leadership from directly impacted people and those with an intersectional identity to make the critical interventions that will result in true progress. This means directly impacted Black immigrants taking the lead against mass criminalization and building an immigrant rights and racial justice movement inclusive of Black immigrant struggles.

In the tradition of Black liberation struggles, from slave insurrections to the Black Power movement, immigrants from Africa and the Caribbean have always played a lead role. Today, we are at a pivotal point in the fight for human rights. The continued growth of leadership by Black immigrants on key issues will make all of our movements stronger and more effective as we move forward.