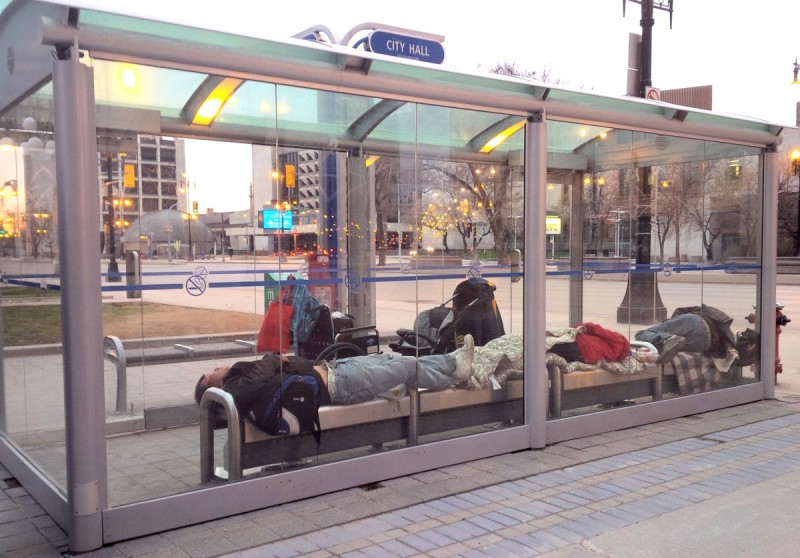 Transit Is The New Frontline Of The War On The Unhoused

Above Photo: People sleep with their belongings in the City Hall bus shelter at the corner of Main Street and William Avenue in Winnipeg. Lyle Stafford.

Growing Attacks On Unhoused People Are Simultaneously An Attack On Transit As A Functional And Just Public Service.

On June 9, Winnipeg’s public works committee voted to remove the glass, seating, and doors from two bus shelters outside Kildonan Place mall as a means of displacing unhoused people who have been living or spending time in them. While far from the first time this has happened⁠—the city has removed doors and heated benches from at least 11 bus shelters to discourage their use as “temporary homeless shelter[s]”⁠—it’s one of the most visible and contentious instances of the trend.

Councilor Shawn Nason, who represents the Transcona ward where the two bus shelters are located, has spent the last several months inciting an increasingly aggressive campaign about the issue, including introducing a motion against “hoarding” in public areas that would enable city staff to more easily raid encampments. The motion was eventually withdrawn following backlash from many non-profits working with unhoused people. Despite having acknowledged in February that removing bus shelters “doesn’t resolve the issue” and “just moves it down the street,” Nason stated after the recent vote that “it’s the only tool we still hadn’t full[ly] executed from a perspective of things we could do.”

This calculated destruction of transit infrastructure is the continuation of a long-standing but rapidly escalating war against mostly Indigenous unhoused people in Winnipeg and other Canadian cities. Unsurprisingly, much of this relates to deeply reactionary and frenzied fear-mongering about use of criminalized drugs, ignoring the obvious reality that drug-related harms are overwhelmingly caused by prohibition, toxic supply, stigma, and extreme lack of harm reduction services like safe consumption sites—not the substances themselves. It’s certainly relevant that, like Nason, two of the three suburban councilors on the public works committee who voted for the removal of the bus shelters also recently voted against a motion to move towards decriminalizing possession of miniscule amounts of criminalized drugs.

Earlier this year, Edmonton closed a majority of public washrooms in transit stations due to high rates of criminalized drug use in them, a decision explained as trying to “reduce drug poisoning risks.” While some were reopened in May, only one was reopened in the downtown core, and all are being accompanied with increased security. On June 8, a day before the vote in Winnipeg to destroy two bus shelters, Edmonton also introduced finable bylaw offences for “loitering” and “visibly” using criminalized drugs, a combination of bans that will more than likely target poor Indigenous people.

It’s no coincidence that this war is largely unfolding at sites of public transit such as bus shelters and train stations. As encampments in parks and underpasses have become systematically criminalized, barricaded, and subjected to sonic warfare, transit infrastructure remains one of the last places for unhoused people to seek shelter, particularly during extreme temperatures, the still-deadly COVID-19 pandemic, and other health crises experienced in shelters including the First World War-era trench fever. Many people have understandably taken to living, being, and self-medicating with legal and illegal drugs in these venues because there’s no other place to safely or privately do so on their own terms.

As the chief of Winnipeg’s fire-paramedic service explained in February during a report about rising 911 calls to bus shelters, this trend is entirely rational: “Some of this is fear of COVID. And staying in a heated shelter with lighting and frequent traffic nearby provides some sense of security.” Or as Desirae Whitehead, a resident of a Winnipeg encampment that was destroyed by the city in mid-2020, explained at the time of the eviction: “I’m not a homeless person. This is my home. This is my family.”

Nobody is pretending that these situations are ideal. Several people have died in bus shelters in recent years, including a man found on a frigid February morning, while others have caught fire. Their repurposing as multi-person shelters, often requiring installation of an ad-hoc barrier with cardboard or mattresses due to the city’s removal of glass, precludes their designed use for most transit riders. But these outcomes are not the fault of the people forced to live in such risky and public circumstances. Rather, they are the acute manifestations of the deepening contradictions of capitalism, colonialism, and carcerality, in which polarization and inequality is worsening for the benefit of business owners, developers, wealthy suburbanites, and cops.

These growing attacks on unhoused people are simultaneously an attack on transit as a functional and just public service. It should go without saying—but clearly requires it—that stripping bus shelters of all effective protection and closing public washrooms in transit stations greatly undermines the quality of transit service for many riders, especially within conditions of stagnating or declining reliability necessitating long waits. It’s no accident that the same mostly suburban councilors who are leading this latest assault against unhoused people are the same people who have cut transit service (at the very moment that more should be provided to facilitate social distancing), hiked fares, committed crumbs to active transportation infrastructure, and cheered on massive expansion of road construction.

The privatization and securitization of mobility, housing, and social supports are all deeply intertwined, with ever-increasing reliance by transit systems on fare revenue (rather than public funding) motivating racist and draconian enforcement. This also can’t be separated from the gentrification of transit to facilitate new and highly profitable “transit-oriented development,” with the escalating presence of police and security on buses, trains, and stations a blatant attempt to prioritize the comfort of the “right” kind of people: so-called “choice” riders using transit to commute to their professional jobs or after-work socializing, rather than “captive” riders who are overwhelmingly poor, racialized, women, or disabled. This affluent “choice” ridership is who most new bus rapid transit and light rail lines are being built to cater to, while transit service and infrastructure in low-income and racialized communities is gutted and marginalized.

As mentioned, Nason has claimed that dismembering the bus shelters is the “only tool we still hadn’t full[ly] executed from a perspective of things we could do.” This supposed helplessness is a common tendency among right wing politicians: after trying exactly nothing but displacement and incarceration, they conclude that there’s nothing left to be done but more of the same heinous revanchism and posture as being “open to viable alternatives.” There are, of course, near-countless “things we could do” or “viable alternatives” that can and should be introduced. The impediment isn’t a lack of possibilities but the thinly veiled racism, ableism, and anti-poor propagated by politicians catering to the interests of capital, cops, and wealthy residents.

Here are only five such possibilities, all of which can be advanced at least in part by cities:

The supposed crisis of unhoused people living in bus shelters or using criminalized drugs in train station bathrooms has been purposefully misdiagnosed by self-serving right wing forces including cops, politicians, and business owners. As always, displacement and harassment of oppressed people will only move people to a different locale, where the same issues will inevitably arise.

Transit infrastructure has become the site of visibly manifesting contradictions at the heart of the vicious capitalist and colonial project because it’s one of the few public spaces left for people to safely gather. However, this reality is under escalating threats and it’s imperative that these efforts be coherently resisted with a program of radical alternatives that focus attention on the roots of the problem rather than its symptoms. Failing to advance such a counter-hegemonic program will mean the continued destruction of public transit and systematic elimination of unhoused people.