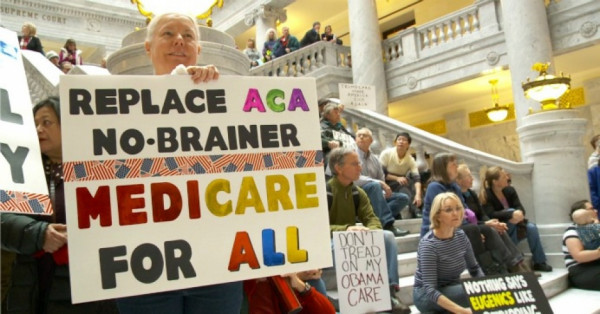 Above: Replace ACA with Medicare for All. Photo from FOX13 Salt Lake City

We often need a translation of what a politician is promising. The politician wants you to hear what you want to hear. They do this by not providing a lot of details because when you know the real plan you can predict the outcome of that plan.  Below is President Trump’s comments in his speech to a Joint Session of Congress on February 28, 2017 on repealing and replacing the Affordable Care Act or Obamacare from the White House website. The president’s comments are followed by a comment from Dr. Don McCanne who writes a Quote of the Day column for Physicians for National Health Program.

The only way to achieve President Trump’s goals of lowering costs, giving people choice and improving the quality of healthcare is to put in place a National Improved Medicare for All. The policies the Republicans and the administration have been describing will lower the quality of healthcare, decrease people’s health coverage and while they may lower premiums, they will not lower costs. Achieving that outcome requires elected officials to stand up to the health insurance and pharmaceutical industries as well as investers in for-profit healthcare. To achieve that people need to join the Health Over Profit campaign and work together over the next several years to achieve a historic change or putting in place a real health system in the United States that covers everyone with high quality healthcare from birth to death.

Tonight, I am also calling on this Congress to repeal and replace Obamacare with reforms that expand choice, increase access, lower costs, and, at the same time, provide better healthcare.

Obamacare premiums nationwide have increased by double and triple digits.  As an example, Arizona went up 116 percent last year alone.  Governor Matt Bevin of Kentucky just said Obamacare is failing in his state — the state of Kentucky — and it’s unsustainable and collapsing.

One-third of counties have only one insurer, and they are losing them fast.  They are losing them so fast.  They are leaving, and many Americans have no choice at all.  There’s no choice left.  Remember when you were told that you could keep your doctor and keep your plan?  We now know that all of those promises have been totally broken.   Obamacare is collapsing, and we must act decisively to protect all Americans.

Action is not a choice, it is a necessity.  So I am calling on all Democrats and Republicans in Congress to work with us to save Americans from this imploding Obamacare disaster.

Here are the principles that should guide the Congress as we move to create a better healthcare system for all Americans:

First, we should ensure that Americans with preexisting conditions have access to coverage, and that we have a stable transition for Americans currently enrolled in the healthcare exchanges.

Secondly, we should help Americans purchase their own coverage through the use of tax credits and expanded Health Savings Accounts — but it must be the plan they want, not the plan forced on them by our government.

Thirdly, we should give our great state governors the resources and flexibility they need with Medicaid to make sure no one is left out.

Fourth, we should implement legal reforms that protect patients and doctors from unnecessary costs that drive up the price of insurance, and work to bring down the artificially high price of drugs, and bring them down immediately.

And finally, the time has come to give Americans the freedom to purchase health insurance across state lines which will create a truly competitive national marketplace that will bring costs way down and provide far better care.  So important.

Comment by Don McCanne, MD from Quote of the Day

Although President Trump has previously offered no specifics on his proposals for health care reform, he has said that his plan would provide “insurance for everybody… much less expensive and much better” (Washington Post, January 15, 2017). In this speech he calls for “reforms that expand choice, increase access, lower costs and at the same time provide better health care.” But then, what are the specifics of his proposal?

*  Eliminate the mandate to purchase insurance:  All honest policy analysts agree that would significantly increase the numbers of uninsured – not exactly a policy approach to cover everyone.
*  Lower the cost of health insurance:  Assuming health care costs remain the same, the only way you can reduce insurance premiums is through various innovations that shift more of the costs to the plan beneficiaries. Making an insurance plan more affordable impairs access to care because of the financial barriers created by the higher out-of-pocket expenses.
*  Americans with pre-existing conditions should have access to coverage:  The key word here is “access.” In December, the Republicans decided that they would drop the guarantees of health care coverage and instead insure access to coverage. They merely mean that will ensure that plans would be available in the market by relaxing the requirements that plans face today. Having access to an inadequate or unaffordable plan does not mean that you have access to affordable health care.
*  Tax credits for purchasing coverage:  Although he has not defined the tax credits here, the leading Republican proposal is that the tax credit would be based on age and not on income. Lower- and middle-income individuals may find that the tax credit is not adequate to make their share of the premium affordable – thus increasing the numbers of uninsured. If the tax credit is not refundable those who pay little if any taxes could not afford to purchase insurance.
*  Expanded health savings accounts:  People who do not have enough income to save some for cash reserves would not have enough to make deposits into a health savings account (HSA). The only distinguishing feature of HSAs over other savings is that HSA deposits are deductible from income for tax purposes. This form of “tax expenditure” is highly regressive since the wealthy benefit and the poor do not. Expanding the amount of the allowable contributions to HSAs benefits the wealthiest of us, using our tax money to reduce their net out-of-pocket expenses. This is a tax policy that directs the benefit to exactly the wrong place.
*  Americans purchase the plan they want, not the plan forced on them:  They would eliminate essential health benefits and actuarial floors, making much less expensive plans available, but plans that would expose many to financial disaster should significant health needs develop.
*  Give our state governors the resources and flexibility they need with Medicaid:  They would convert state payments for Medicaid to block grants or per capita caps, either of which enable the federal government to reduce transfers to the states. “Resources and flexibility they need” apparently means granting the states fewer resources so they can have the flexibility to throw more patients off of their Medicaid programs.
*  Implement legal reforms that protect patients and doctors from unnecessary costs:  This is the old saw that somehow malpractice costs are a major contributor to our national health care spending; they are not, though we do need tort reform. But that needs to be reform that protects patients who are harmed, not reform that allows physicians to escape their responsibilities. Rather we need to civilize the process through alternate dispute resolution.
*  Bring down the artificially high price of drugs:  Yes, but that requires a regulatory role of government, whereas the Republicans are reducing regulation, pretending that somehow the magic of the marketplace will put a lid on drug prices. But it is the market that is bringing us six figure drug prices.
*  Freedom to purchase health insurance across state lines:  Not only does this reduce plans to their lowest common denominator, preventing state insurance commissioners from exercising adequate control over renegade insurers, but also the insurers do not want to face the administrative costs of setting up provider networks and marketing their plans in regions that would not be profitable to them.

If Trump’s plan looks familiar, it is. These proposals are the same old proposals that the Republicans have been tossing around for years. These are the proposals of Ryan’s two white papers and the recent “leaked” legislative draft that the Republicans quickly dismissed because of the blow back they received. Also it resembles the previous legislation introduced by HHS Secretary Tom Price when he was in Congress.

Trump has been meeting with Price and has promised releasing his formal proposals in three or four weeks, though Trump wants them in two weeks. These meetings have led Trump to say that reforming health care is “unbelievably complex… nobody knew that health care could be so complicated.” But this speech is ominous. The Republican/Price/Trump proposals will reduce the federal guarantees of affordable health care, resulting in greater numbers of uninsured and in greater out-of-pocket costs that will be unaffordable for many more.

It looks like Trump’s promise of “insurance for everybody… much less expensive and much better” is deceptive. Insurance for everybody means access to insurance, not actually being insured. Much less expensive means insurance that does not protect your financial assets, it you have any. Much better means that you have a choice of purchasing worthless plans, if you call that better.

This deception reaches a plane that we have to call it for what it is… a lie. He could have fulfilled his promise by bringing us an improved Medicare for all.