Above photo: Madeleine Scammell, an environmental health professor at Boston University’s School of Public Health, co-authored a study that found dead or dying trees were 30 times more likely to have been exposed to methane in the soil surrounding their roots than healthy trees. Phil McKenna/InsideClimate News.

The study, which took place in Chelsea, Massachusetts, a low-income immigrant community near Boston, also highlights the many interrelated environmental challenges in a city that faces high levels of air pollution, soaring summer temperatures and is now beset by one of the highest coronavirus infection rates in the nation.

Dead or dying trees were 30 times more likely to have been exposed to methane in the soil surrounding their roots than healthy trees, according to the study published last month in the journal Environmental Pollution.

“I was pretty blown away by that result,” said Madeleine Scammell, an environmental health professor at Boston University’s School of Public Health who co-authored the study. “If these trees were humans, we would be talking about what to do to stop this immediately.”

The study measured soil concentrations of methane and oxygen at four points around the trunks of 84 dead or dying trees and 97 healthy trees. For trees that had elevated levels of methane in the surrounding soil, the highest concentrations were found in the dirt between the tree and the street, suggesting that the gas had leaked from natural gas pipelines, which are typically buried beneath roadways.

Suspicions that gas leaks kill plants aren’t new. Robert Ackley, a study co-author who spent decades identifying gas leaks for utility companies in the region, was trained to find them by looking for dead and dying vegetation. Such anecdotal evidence, along with decades-old studies, had previously suggested the link between gas leaks and tree death. The current study, however, was the first to formally quantify the relationship between gas in the soil and tree health in an urban setting, the authors said.

Stephen Leahy of the Northeast Gas Association, a natural gas utility group, said he had not reviewed the current study in detail but noted that “there are multiple factors that could be involved in tree damage, from disease to age to road traffic to methane.”

Methane, the primary component of natural gas, is approximately 84 times more potent in warming the atmosphere than carbon dioxide over a 20 year period, making plugging even small gas leaks important when trying to tackle climate change.

A recent study found so much methane escaping or intentionally vented from wells in the Permian basin of Texas and New Mexico that the climate impact associated with burning natural gas from the region was likely greater, over a 20-year period, than burning coal.

Other threats from gas leaks manifest themselves much faster. In 2018, a series of explosions resulting from the catastrophic failure of a gas pipeline in the Merrimack Valley north of Boston killed one individual and destroyed dozens of homes.

“Not only are natural gas leaks dangerous from a potential explosion hazard, they are a potent greenhouse gas,” said Joe von Fischer, a biology professor at Colorado State University who has mapped gas leaks in cities across the country but was not involved in the current study. “And in addition to that, we are finding there is an impact on plant health as well.”

Von Fischer said that in addition to the more well known process of photosynthesis, where trees convert sunlight into chemical energy, they also respire—or breathe—similarly to humans and need oxygen in both the air and soil to do so. Oxygen in the dirt around their roots is displaced by methane when there is an underground gas leak, he said. 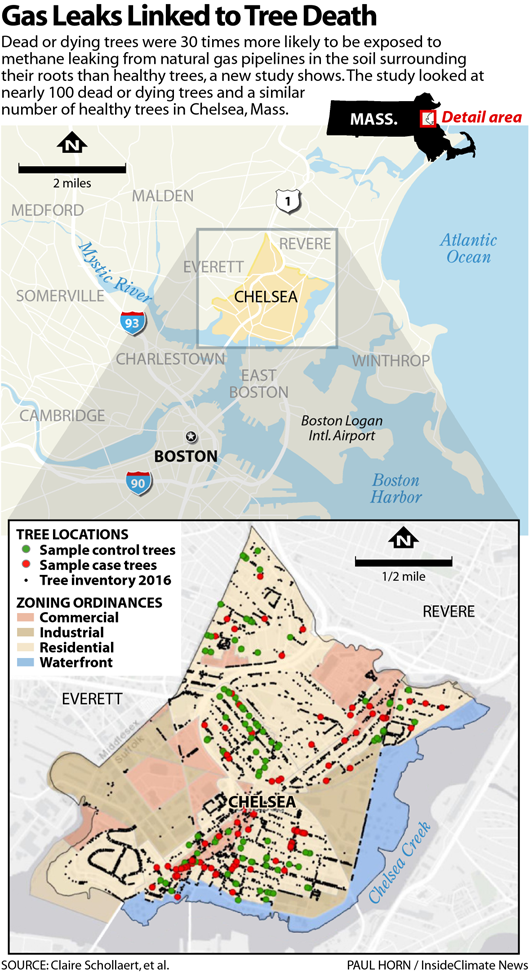 The current study presents an opportunity for more detailed follow up studies. Researchers could measure the concentration of other trace gases found in natural gas to provide a conclusive “fingerprint” for the source of the methane found in the soil, von Fischer said. They could also fumigate the soil surrounding healthy trees with natural gas to observe the effects of methane on them. Overall, however, the study yielded a “very clear result,” he said, and provided further motivation for repairing or replacing aging gas pipelines.

The study comes as the residents of Chelsea, a predominantly Latino community, show the highest rate of Covid-19 in the state and one of the highest rates in the country.  The crowded city’s lack of trees and other vegetation also make it an urban heat island, with summer temperatures significantly hotter than surrounding communities.

A recent assessment by researchers at Harvard University found that even a small increase in long-term exposure to air pollution leads to a large increase in the death rate from Covid-19. While trees are known to scrub pollution from the air, it’s unclear if additional tree cover in Chelsea would significantly lower air pollution in a city that is surrounded by petroleum tank farms, bisected by a major freeway and close to Boston Logan airport. It’s also possible that pollen from additional tree cover could increase rates of seasonal, allergy-induced asthma, which is a risk factor for severe cases of coronavirus, Scammell said.

Additional tree cover could, however, help cool the city at a time when residents are particularly vulnerable, she said.

“We’re approaching summer and people are having to make hard choices about purchasing food or paying for utilities, including elderly people who live on second and third floor apartments,”  said Scammell, a resident of Chelsea. “Cooling is more challenging for them.  We should be guarding our trees carefully, because they help prevent extreme heat and protect us in terms of providing shade and cooling.”

Phil McKenna is a Boston-based reporter for InsideClimate News. Before joining ICN in 2016, he was a freelance writer covering energy and the environment for publications including The New York Times, Smithsonian, Audubon and WIRED. Uprising, a story he wrote about gas leaks under U.S. cities, won the AAAS Kavli Science Journalism Award and the 2014 NASW Science in Society Award. Phil has a master’s degree in science writing from the Massachusetts Institute of Technology and was an Environmental Journalism Fellow at Middlebury College.