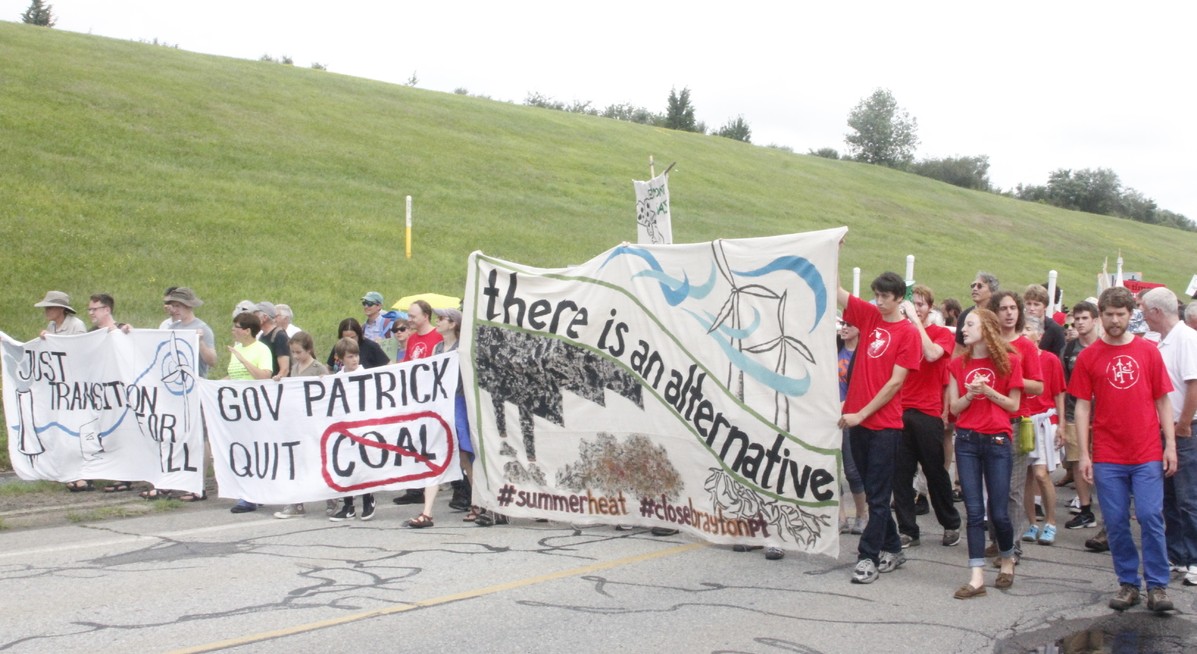 Trespassing For A Planet That Cannot Speak For Itself

It’s 7:30 am on Sunday at the Coffee Depot on Main St. in Warren and Sherrie Anne André and Nick Katkevich are discussing how much money she’ll need. André is going to get arrested today and she needs to run to the bank to withdraw money to pay for her bail. For now, though, after the ATM, they’re off to a park and ride lot in nearby Somerset, Massachusetts. to climb onto school buses with more than a hundred other activists bound for the protest to shut down the Brayton Point power plant.

Katkevich tells André she’ll need about $250. He was arrested a month ago in Connecticut for protesting UBS’ support of mountaintop removal mining (MTR) operations. Rather than go to jail today and complicate the legal process in Connecticut, he will instead be live-tweeting the protest and supporting André and other participating Fossil Free RI members. In total, the protest will draw around 400 people from around New England, with around 30 from Rhode Island.

At the parking lot, all manner of people gather in groups carrying bright signs with dark premonitions: “COAL KILLS,” “EXPECT RESISTANCE,” “Suffocating for Profit?? Don’t Poison the PLANET.” The National Lawyers Guild has sent a large contingent of observers in day-glo green hats, and protesters who plan on getting arrested are wearing red shirts with turbines and solar panels screen-printed on them in white paint.

But why should Rhode Islanders — or people representing every Northeast state and states as far as California, for that matter — show up to raise a ruckus to close down a power plant in Somerset?

Katkevich, a native of Bristol, and André, a resident of Warren, have abundant reasons. Their communities live in the shadow of the plant, and the toxins that come out of Brayton Point have visible public health impacts on a daily basis. Burning coal produces mercury, arsenic, dioxins, and lead which increase the risks of cancers, strokes, heart attacks, and nervous system disorders.

Strangely though, it’s the less visible threat of global warming that motivates them. “We don’t even have time to worry about the future,” André says. “We’re already starting to see effects. We need to act now.”

The Brayton Point plant, which burns mainly coal, is the single largest emitter of carbon pollution in the Northeast. Most of the people gathered in the shade of the plant are here to raise awareness of the dire need to stop burning coal and to slow the burning of all fossil fuels. In particular they’re demanding that Massachusetts Governor Deval Patrick immediately close the plant through executive action and provide support for the plant’s workforce to transition to sustainable jobs.

“I’m here for the health and safety of the people of the community here,” Chuck Nelson, a retired coal miner from West Virginia tells me. He cites Center for Disease Control stats that report, every year in the US, 23,000 people are killed and 640,000 are born with birth defects due to the mercury from coal. “Not ‘maybe.’ They will be,” he says.

Nelson also speaks to the matter of coal mining itself. Mountaintop removal is destroying Appalachia, he says. Coal mines are buying up everything and forcing people off their land. Five hundred mountains are have been leveled and communities are vanishing with them. “People are just collateral damage, but we don’t want to be collateral damage. We were here before coal was discovered,” he says.

It’s “a human rights violation, almost like genocide,” he adds.

Socially speaking, the climate justice movement is an odd one. Since the planet and its besieged ecosystems cannot speak for themselves, a strange amalgamation of people comes forward in their defense. They are conservative and radical, rich and poor, young and old. After crossing the yellow and black caution tape that marks the power plant’s property line, André — a 24-year-old of Latina and Asian American descent — is arrested alongside Fred Caswell a white, 86-year-old resident of Middletown. Missa Weiss from Framingham, Massachusetts, who brings her daughter Leilani (the youngest protester, at a five months) and her four other children, seems to capture the unifying sentiment. “We borrow the planet from our kids, and we have to give it back,” she says. Many of the arrestees likewise speak of a moral obligation to their children and grandchildren.

By 1:30 the protesters are gone. André and forty-three others have been taken off to jail. And the Brayton Point power plant is still running, steam rising from one of the two cooling towers that blight the head of Narragansett Bay.

Yet, thanks to the work of Katkevich and others bent over their phones, word of the rally — the chants and banners, the marching, the arrests — is rippling out over the Twitterverse. The debate is being taken up on Facebook, on TV, and in the papers. And it doesn’t end there. Tomorrow, many of these climate activists will begin preparing for a week-long march billed as an “Energy Exodus” that will proceed 70 miles from Brayton Point to Cape Wind in Barnstable. The march starts August 28.