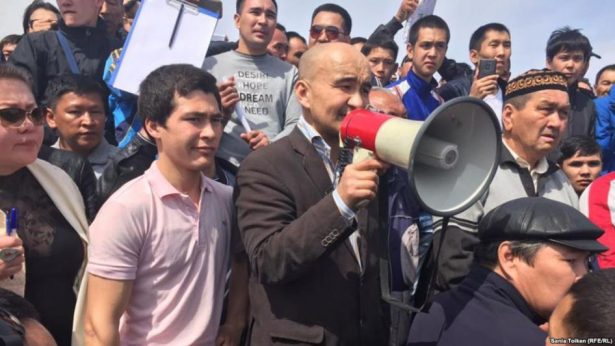 On October 12, a hearing against two prominent activists began in Atyrau, the oil capital of Kazakhstan. Max Bokaev and Talgat Ayan were arrested just after the first major rally against an unpopular land reform on April 24.

The reforms would have increased the number of years that foreigners are allowed to rent agricultural land from 10 to 25 years, and enabled land to be sold or leased at auctions. Those opposed to these reforms argue that — due to corruption — only the powerful and rich will benefit from the amendments, leaving the rest of the population without land.

The protests began on April 24 in Atyrau, when oil workers and thousands of people from rural areas cried out against land reform at the main square, urging authorities to stop the harassment against activists who support the movement. The mayor arrived and told those gathered that the rally was illegal and that they must leave the square. They did not follow his orders, however, and as the crowd grew, he returned, offering to present the people’s demands in writing to the government. He also promised to have a detailed answer by May 21 and assured those at the rally that they would not be prosecuted by the authorities.

The demonstrations then grew in size and spread to many other cities, including Astana, Almaty and Karaganda over the following weeks. Dozens of people, including journalists, were detained.

On May 5, after this wave of protest, Kazakh President Nursultan Nazarbaev, who has ruled the country since the collapse of the Soviet Union in 1991, declared a one-year moratorium on amending a number of rules in the land code. In August, he extended the moratorium to five years, saying that the government needed time to review the amendments and explain their necessity to the people.

Despite the fact that a moratorium was declared, the government moved to punish Bokaev and Ayan. They were sentenced to 15 days of administrative detention for organizing an unsanctioned rally in May and the National Security Committee initiated a criminal investigation against them. As part of the investigation, their homes and those of six other human rights defenders were searched, and documents, computers, telephones and USB drives were seized.

While in pre-trial detention, the poor quality of food, cold and lack of regular access to a doctor and medicine seriously affected Bokaev’s health, who suffers from a number of chronic diseases, including hepatitis C. Their detention was repeatedly extended, and the charges they faced were changed multiple times. On September 30, they were officially indicted and accused of incitement of hatred, dissemination of false information and organizing an unlawful demonstration — charges that could lead to 10 years in prison if they are convicted.

Kazakhstan has been repeatedly criticized by NGOs and international organizations, including the United Nations, for using the law against individuals exercising their right to freedom of expression, including the broadly formulated offense of incitement to “social, national, clan, class or religious discord” that is now being used against Bokaev and Ayan. In August, the U.N. Human Rights Committee noted that there is corruption in Kazakhstan’s judiciary and that its independence is not sufficiently secured under the law. The United Nations urged Kazakhstan to take all measures necessary to safeguard, in law and practice, the independence of the judiciary and guarantee the competence, independence and tenure of judges.

Amnesty International, Human Rights Watch and other international organizations are urging the Kazakh authorities to drop all charges against Bokaev and Ayan and release them immediately and unconditionally. They argue that they are prisoners of conscience, detained solely for exercising their right to freedom of expression and intent to exercise their right to peaceful assembly. Dozens of national and international observers will be watching the trial.