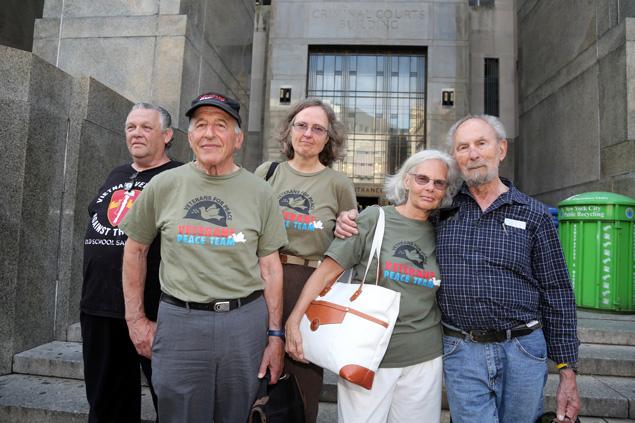 Above photo by Jefferson Siegel of New York Daily News.

The defendants in the trial are using the case to challenge the increasing restrictions placed by the New York Police Department on First Amendment freedoms of speech and assembly. Their trial will hinge on whether their constitutional and international human rights to speech and assembly may be superceded by municipal park regulations.

“This is a group of people who forced a confrontation with the police and forced the police to arrest them,” said Assistant District Attorney Lee Langston in his opening statement. Defense attorney Martin R. Stolar of the National Lawyers Guild, on the other hand, characterized the police behavior as “morally outrageous.” He continued, “Legally, we believe [the defendants’ actions] will be protected by the First Amendment.” Defense lawyer Jonathan Wallace, also from the NLG, called the event at the veterans memorial “the core of what the First Amendment was designed to protect.”

Explaining why he chose to participate in the Oct. 7 gathering, defendant Major Ken Mayers, USMC Ret., said: “I chose to travel 2000 miles to stand with my fellow Veterans For Peace in the cold rain on the night of October 7, 2012, because the effectiveness of the First Amendment is being chipped away at an increasing and alarming rate through the imposition of limits on the people’s exercise of their inalienable rights. We see coming to pass precisely the ‘abuse of its powers’ that the states feared would result from a strong federal government unfettered by these necessary restrictions.”

Statements from participants about the Oct. 7 arrests and why they were there.

The arrests took place on the 10th anniversary of the U.S. invasion of Afghanistan as participants in a rally against the wars were laying flowers at the memorial and reading the names of those killed in the U.S. occupations of Afghanistan and Iraq, as well as those U.S. soldiers killed in Vietnam who are commemorated at the memorial. The police moved in after 10 pm, the official closing time of the memorial, and began arresting the protesters, who continued reading names until they were all in custody. Ten of those arrested chose to take ACDs (Adjournments in Contemplation of Dismissal, which means that if there are no further arrests in six months, the charges are expunged from their records), and charges against a blogger who was livestreaming that night were dismissed in the interests of justice.

Despite the posted closing time on the memorial, which is in an open plaza between two office buildings, on most nights there is no attempt by police to enforce the 10 pm curfew. The only other time the NYPD has made arrests after 10 pm was May 1, 2012, when participants in a massive May 1 march held a general assembly at the memorial. The first day of the prosecution’s case featured contradictory descriptions from police witnesses about the exact boundaries of the park where 25 protesters were charged with violating the closing time, with the captain from the First Precinct saying that the city park consisted of only the small central area of the park where the memorial stands and a lieutenant from the Manhattan South Task Force saying that most of the plaza was included in the park property.

Those on trial argue that there is no overriding government interest in closing the plaza that should take precedence over people’s rights to free speech and assembly, especially at a site of solemn remembrance such as the Vietnam Veterans Memorial. They point out that there is no public safety or sanitation reason to close the park that would justify abridging First Amendment rights. Finally, noting that “Nightmares of war don’t end at 10 pm,” they assert that the memorial, by its very nature, should be open at all times for those who feel a need to remember and honor lost loved ones, as similar memorials in other locations are.