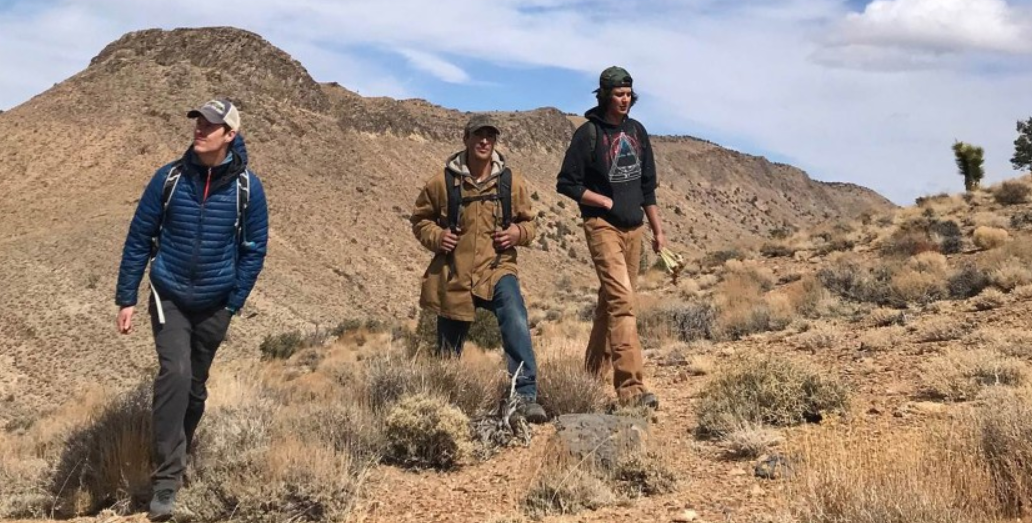 Above photo: From left, Bryan Hatchell, spokesman for the nonprofit Friends of the Inyo, Jeremiah Joseph, spokesman for the Lone Pine Paiute Shoshone Tribe, and Seth Tsosie, also of the tribe, walk in the area where K2 Gold Corp. of Vancouver, Canada, is conducting exploratory drilling. Louis Sahagun / Los Angeles Times.

Conglomerate Mesa’s charcoal smelters helped give birth 150 years ago to the nearby rip-roaring silver town of Cerro Gordo, where ingots were produced and shipped off to the small pueblo of Los Angeles by steamboat and a 20-mule team.

Now, the 22,500-acre tableau of Joshua trees, piñon pines and limestone boulders bristling with fossil shells is turning to mining again. Spurred by the rising price of gold, K2 Gold Corp., of Vancouver, Canada, is drilling and trenching in hopes of selling its findings or partnering with a bigger company that would, perhaps, transform the public lands into an open pit cyanide heap leach mine, just a few miles from Death Valley.

But environmental groups and tribal nations have drawn a line in the alluvial sands overlooking the community of Lone Pine, population 2,000, on the eastern flanks of the Sierra Nevada range: No mining in Conglomerate Mesa, not ever again.

On a recent weekday, Bryan Hatchell, 27, desert policy associate for the nonprofit Friends of the Inyo, and Jeremiah Joseph, 36, a cultural expert for the Lone Pine Paiute Shoshone Tribe, led a group on a hike across two miles of scruffy mountains and sweeping plains managed by the U.S. Bureau of Land Management to an area where the group of Canadian investors has launched an exploratory drilling program.

Their concern was that Conglomerate Mesa — a remote swath of ancestral tribal lands where the explosions of thunderstorms are the loudest noises one hears — will feel the constant rumble of earth movers over networks of service roads and utility corridors connecting heaps of ore and mining equipment.

“We can’t continue to look at nature as simply an inventory of items to profit off of,” Joseph said. “It’s time to start protecting what’s left of the wildlands that our ancestors honored.”

“K2 is in for a hell of a fight,” Hatchell said. “Mining here is off the table.”

In a telephone interview, Stephen Swatton, president and chief executive officer at K2, said his company is cognizant of the environment.

“There’s gold up there and the world needs gold,” Swatton said. “Mining has to happen somewhere. So, we’ll defend ourselves as best we can.”

In a broader context, the dispute is seen as a test for the Biden administration and Interior Secretary pick Deb Haaland, and whether they plan to make a priority of injecting significant environmental protections into management strategies for large-scale mining projects on public lands.

“When it comes to gold mining in the California desert,” said Todd Tucci, senior attorney at the nonprofit Advocates of the West, “the rubber is hitting the road right now in the little town of Lone Pine.”

K2 officials have suggested that a mine on the mesa, with approval of the BLM, would operate nonstop as an open pit, using tons of cyanide each day to leach gold from heaps of crushed ore, a technique that has transformed previously unprofitable mines into bonanzas.

In full swing, K2 officials say, the mine could help answer local prayers for a more stable regional economy by creating jobs and generating sales taxes.

Many rural towns on U.S. Highway 395 in Owens Valley rely on tourists from Southern California swarming into the eastern Sierra Nevada range and ringing up purchases in tackle and sporting goods stores, art galleries, restaurants and saloons with Old West facades.

This year’s travel restrictions due to the deadly COVID-19 pandemic changed all that.

Jodie Gibson, vice president of exploration for K2, said his company has sunk about $2 million into the venture over the last two years. So far, the results are encouraging.

Holding up a tray of samples of crushed rock gathered from various depths beneath the surface of the mesa, Gibson smiled and said: “Most folks would say this looks like worthless gravel.”

“In fact, it’s high-grade gold ore,” he said. “It would yield about 7 grams of gold per ton, which is really good.”

Opponents, including the Sierra Club, Friends of the Inyo, the Center for Biological Diversity, the Lone Pine Paiute Shoshone Tribe and the Timbisha Shoshone Tribe, however, worry about air pollution, destruction of historic remains and Native American cultural sites, roads cut through deer migration corridors, and the water required for mining gold.

Pumping out millions of gallons from desert aquifers, or underground lakes, they fear, could exhaust regional springs in valuable wildlife habitat, and attract wildlife to ponds of cyanide-laced water.

It doesn’t help that when asked, “Where would a full-blown mine on the mesa get its water from?” K2 officials sheepishly respond: “That’s a darn good question.”

In any case, the company, which owns mineral claims on 14,400 acres of federal land, says its exploratory efforts are far from over.

“It may take us a decade to complete the exploratory phase of our mission,” Gibson said. A succession of mining companies has leased the land at issue from the BLM since the 1990s.

Critics are using the controversy to influence Congress as it wrestles with reforms of the 150-year-old federal law that regulates mining claims and makes mining the highest use of public lands managed by the BLM.

The 1872 mining law, written before the telephone was invented, allows multinational mining concerns to extract gold, silver and other “hardrock minerals” on public lands without compensating the taxpayers who own the land. Critics say it also lets industry off the hook for cleanup costs at abandoned mines.

That may change soon. Rep. Raul Grijalva (D-Ariz.), for instance, has proposed legislation that would replace the law with a modern leasing system designed to protect taxpayers and public lands.

“I’m hopeful that Congress will roll out some important reforms of the mining law,” said Aaron Mintzes, senior policy counsel at the nonprofit Earthworks. “Mining crowds out other land uses. That has to change because these lands belong to all of us.”

Mindful of growing concerns, a subsidiary of K2 has opened an office adjacent to the Lone Pine Chamber of Commerce, hosted community gatherings, and produced “guest columns” about its activities published in the local Inyo Register newspaper.

They include a recent article written by Katie VanSydow, a company field geologist, titled “The Many Uses of Gold.”

“When we think of gold’s uses, our first thought immediately jumps to jewelry and money,” she wrote, in part, “but there are so many other uses for gold that are vital to our modern society.”

For example, she said, gold is critical to the phasing-out of gas-powered vehicles to fight climate change. “Automobiles, particularly electric ones,” she said, “require circuit boards for operating things such as monitoring engine performance and even playing your favorite podcast through your sound system.”

In an opposing view published in a section of the newspaper titled “Miscellaneous commentary,” Michael Prather, an environmental activist and Lone Pine resident, argued that it is not a question of the value of gold, it is a question of saving a portion of dwindling wilderness.

“Mining is accepted by most of us in Inyo County,” he wrote. “Pumice mining near Olancha, cinder mining near Little Lake, borate mining east of Death Valley National Park, soda ash mining on Owens Lake, geothermal energy extraction at [Coso Geothermal Area], gold mining on the west slope of the Panamint Mountains.”

But “it is in the interests of Inyo County in the long run to oppose open pit mining at Conglomerate Mesa,” he added. “Supporting such an environmental, cultural and recreational loss is a mistake, plain and simple.”

Kathy Bancroft, tribal historic preservation officer of the Lone Pine Paiute Shoshone Tribe, has challenged K2 Gold’s characterization of its drill sites on the mesa as having “low archeological sensitivity.”

“The disrespect of our land is unacceptable,” Bancroft said. “We will stand in the way of any future exploration or mining project.”

Contributing to the controversy was an incident that has come to be known as “pondgate”: K2 Gold was caught siphoning water out of a water hazard at Lone Pine’s Mount Whitney Golf Course into four 55-gallon tanks for use at its drilling sites up on the mesa.

Locals reported the activity to the Los Angeles Department of Water and Power, which swiftly conveyed a sharp warning to K2 Gold: The golf course property and the water in its ponds belong to the city.

“We put the water back,” Gibson said. “After that, several residents offered to sell us water pumped out of their private wells.”

The mesa is home to dozens of species of plants and animals despite scant rainfall, a dearth of natural springs and elevations ranging from 3,800 to 7,100 feet.

For Hatchell, saving the mesa means getting people to know it. So, he has been leading tours across the rugged high-altitude ecosystem.

“People need to know what all the fuss is about here,” he said. “The future of this kingdom of solitude is at risk.”