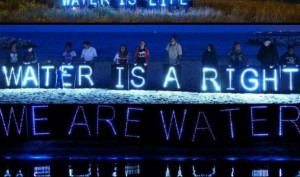 After spending the last year dodging public outcry and numerous lawsuits for continuing to pump water from drought stricken California, Nestle has set its sights on neighboring Oregon as a new source of public water to be converted into privatized profits and shareholder earnings.

But before they could start building their new proposed Arrowhead bottling plant, Gov. Kate Brown sent a letter to the Oregon Department of Fish and Wildlife requesting that the agency withdraw its application for a water rights transfer that would have enabled Nestle to begin operations in Cascade Locks, Oregon.

Instead, the Governor has asked for them to submit an application for a water rights exchange which allows for a public review process.  This decision comes on the heels of sustained protests by tribal fishing people and local protesterswho have been fighting to protect the dwindling water supply throughout the state.

Warms Springs Tribal Council member Carlos Smith said “the Tribal Council unanimously voted yes to send a letter to both Governor Kate Brown and the City of Cascade Locks opposing to the water rights swap for Nestle’s water bottling proposal.” The letter also noted that the Tribe was not involved in the initial review process and that they view the State-led water rights swap as a threat to a water source sacred to their people.

Environmental groups and consumer groups object to the water rights transfer and they are concerned that Nestle won’t pay enough for the water considering their much publicized contracts in California that have left entire cities without money or water.

Earlier this year it was reported that Nestle has continued to extract and export water from the San Bernardino National Forest for more than 27 years on an expired permit.  In addition, there is no oversight or reporting of how much water Nestle continues to pump into their private water bottling plants throughout California, nor have there been any studies of how the mass extraction has impacted the National Forest.

“Now that it has been brought to my attention that the Nestlé permit has been expired for so long, on top of the drought … it has gone to the top of the pile in terms of a program of work for our folks to work on,” San Bernardino National Forest Supervisor Jody Noiron told the The Desert Sun.

Since that report, three environmental groups filed a suit in California federal court against the United States Forest Service demanding Nestle cease piping tens of millions of gallons of water out of San Bernardino National Forest every year.

The suit challenges both the unpermitted extraction as well as the larger issue of corporate ownership of what many consider to be a shared public resource.

Meanwhile, in Oregon, Gov. Brown’s office says a public review process will allow a much needed review of the regulations in lieu of the recent environmental changes in the area including shrinking annual snowfall in the moutains, persistent drought and higher temperatures across the state.