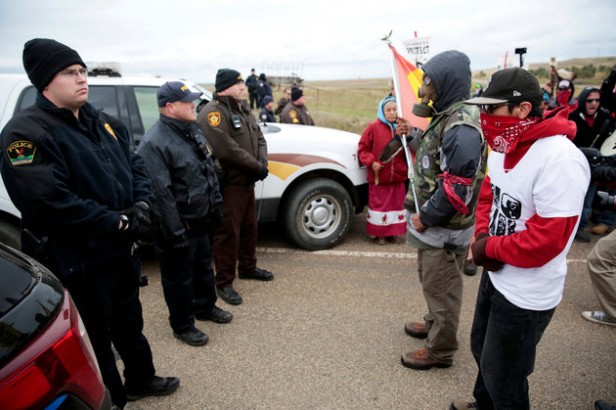 Above Photo: REUTERS/TERRAY SYLVESTER. Dakota Access Pipeline protesters square off against police between the Standing Rock Reservation and the pipeline route outside the town of Saint Anthony, North Dakota, on Oct. 5, 2016.

Meanwhile, the Department of Justice says it wants to “defuse tensions.”

This week, the Standing Rock Sioux called on the Department of Justice to investigate state and local authorities for civil rights violations during protests over the controversial Dakota Access Pipeline.

But North Dakota authorities are refuting the tribe’s accusations, saying they’ve been patient and accommodating with protesters.

“We keep getting portrayed as the jackbooted thugs coming down for a confrontation,” an unidentified Morton County Sheriff’s Department official said Wednesday during a press conference on Facebook Live. “The only times we’ve engaged with them is when they’re breaking the law, when they go to a site and go on other people’s property.”

Rather than seeking to keep the peace, law enforcement personnel are clearly working in tandem with private security of Dakota Access.Dave Archambault, chairman for the Standing Rock Sioux

The DOJ didn’t directly respond to the tribe’s request for an investigation, but says it’s working with authorities and activists.

“The Justice Department is taking the situation in North Dakota seriously, and has been in communications with state and local law enforcement officials, as well as tribal representatives and protesters, to facilitate communication, defuse tensions, support peaceful protests, and maintain public safety,” DOJ spokesman Wyn Hornbuckle wrote in an email. “The department has also offered technical assistance and community policing resources to local law enforcement in support of these goals.”

An online petition that calls on the DOJ and North Dakota Gov. Jack Dalrymple (R) to support protesters’ rights attracted more than 120,000 signatures by Wednesday afternoon.

This summer, the battle intensified over the 1,172-mile pipeline that Energy Transfer Partners is building through North Dakota, South Dakota, Iowa and Illinois. Hundreds of Standing Rock Sioux and their allies are camping out to protest the pipeline over fears it will pollute the Missouri River and destroy culturally significant land.

Recently, protesters have expanded to an auxiliary camp near Lake Oahe, located on private land owned by Energy Transfer Partners. The Morton County Sheriff’s Department official who spoke on Facebook expressed frustration that protesters refused to vacate the new settlement.

“At some point, rule of law has to be enforced,” he said. “We could go down there at any time. We are trying not to. We are trying to avoid the confrontation.”

The area near Lake Oahe is pivotal. Energy Transfer Partners needs a U.S. Army Corps of Engineers permit to build across the federal waterway. But the DOJ, Army and Department of the Interior have jointly announced they won’t issue a permit before conducting a review of the permitting process. The Standing Rock Sioux are arguing for more extensive environmental vetting before construction can proceed.

The mounting tension alarms Jan Hasselman, an attorney who represents the tribe and works for the environmental law organization Earthjustice. “Things are definitely escalating. The company is provoking a confrontation by getting closer and closer [with construction],” Hasselman said. “State law enforcement is acting as a full partner of the pipeline.”

In North Dakota and Iowa, where the pipeline has generated the most opposition, dozens of protesters have been arrested on charges such as trespassing and disorderly conduct, including actress Shailene Woodley.

Journalists have also been arrested, including “Democracy Now” host Amy Goodman, who was reporting when pipeline security guards used pepper spray and dogs against protesters. She was accused of participating in a riot, but a judge dismissed the case.

In his letter to the DOJ, Archambault condemned police tactics such as allowing surveillance planes and helicopters to fly above the protesters’ prayer camp. He said that law enforcement officials shirked their responsibility when they didn’t stop the pipeline’s security team from using dogs against the protesters.

“This country has a long and sad history of using military force against indigenous people — including the Sioux Nation,” Archambault wrote. “I would like to think that those days are past — and that today Tribal rights cannot be ignored and military force cannot be used to suppress Indian people. But when I see the militarization taking place in North Dakota against Indian people, I am genuinely concerned.”

The dog handlers may face charges for working without a license, Morton County investigators announced this week.

Energy Transfer Partners, meanwhile, alleges that protesters have threatened workers and that vandals have caused millions of dollars in damage by setting fire to construction equipment.

The company expressed appreciation for officers’ presence during the conflict. “We are very supportive of the efforts of local and state law enforcement,” Energy Transfer Partners spokeswoman Vicki Granado said in an email.