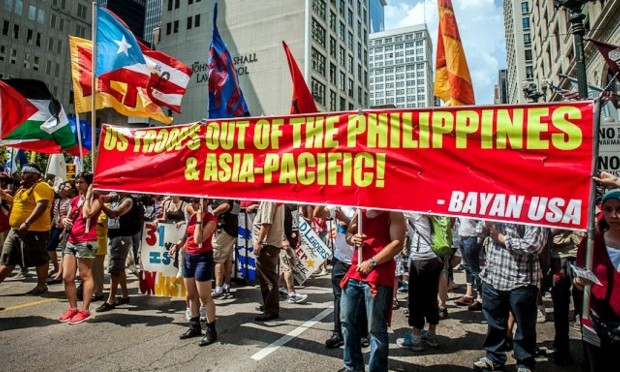 WASHINGTON, DC– As ongoing US-China military tensions over the South China Sea escalate, international human rights advocates are gathering in Washington DC to examine violations to Philippine sovereignty and territorial integrity as a result of escalating US military presence. An International Peoples’ Tribunal (IPT) on the Philippines, scheduled for July 16-18 at the Catholic University of America, will tackle the human rights situation in the Philippines as well as the impact of US military presence which is increasing by way of the newly-signed Enhanced Defense Cooperation Agreement (EDCA).

Amongst the witnesses traveling from the Philippines to testify in the public opinion court are Philippine Congress Representative Neri Colmenares of Bayan Muna Party List and Suara Bangsamoro spokesperson Amirah Lidasan.

“China’s moves in the South China Sea is being condemned around the world, that’s why it’s correct we Filipinos go to the international community and ask for support rather than play into the trap of the US. The US has no concern for the Filipino people. It will not wage war with China to defend the Philippines. It only wants to freely navigate the seas for its own economic and military interests,” stated Colmenares last June 12 at a rally in front of the Chinese Embassy in Manila.

Colmenares will serve as an expert witness on the impact of the US-RP Visiting Forces Agreement and the EDCA, both of which have ensured a permanent rotational presence of US military in the country.

“Since 2002, we have been reporting on the US-directed anti-terrorism operations in Mindanao, and the secret participation of US troops, but no one believed us. The legislators refused to listen to us. The President refused to listen to us. But now, with the bloodbath at Mamasapano, US-trained Special Action Forces of the Philippine National Police themselves are speaking out about how the whole operation was under the command of the US military with US military troops on the ground,” stated Lidasan at a rally in front of the US Embassy last February in Manila.

Lidasan, a native Moro, will testify on secret US drone operations and military presence in Muslim Mindanao, most recently seen in the US-directed anti-terrorist operation in Mamasapano, Maguindanao last January that not only broke rank inside Philippine state forces, but resulted in the death of over 70, including 44 Special Action Forces of the Philippine National Police.

Cases filed in the IPT include the murder of Filipina transwoman Jennifer Laude allegedly by a US Marine last October and the destruction of the Tubbataha Reef, one of the most biodiverse marine life sanctuaries and a UNESCO world heritage site, by a US naval minesweeper in the Sulu Sea.

“It’s time for US taxpayers to understand the role of their government in the human rights crisis in the Philippines, including the impact of US militarism on the Filipino people and their environment,” states Katrina Abarcar of the International Coalition for Human Rights in the Philippines (ICHRP), one of the conveners of the IPT. Other conveners include the National Lawyers Guild, the International Association of Democratic Lawyers, and Ibon International.

A 2007 US Senate hearing on killings in the Philippines led to restrictions placed on a portion of the annual US military aid package to the Philippine government, based on the Philippine military’s culpability in gross human rights abuses.