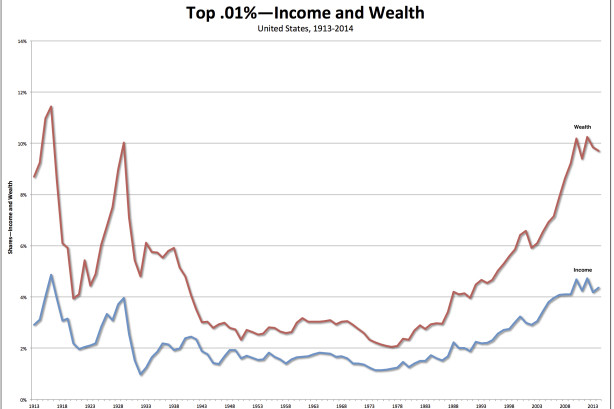 Robert McElvaine, premier historian of the first Great Depression (whose books we have used to teach A Tale of Two Depressions), argues that Republicans today are repeating the same mistakes as the Republicans who were in charge during the 1920s, whose trickledown policies led to the spectacular crash of 1929.

As a historian of the Great Depression, I can say: I’ve seen this show before.

In 1926, Calvin Coolidge’s treasury secretary, Andrew Mellon, one of the world’s richest men, pushed through a massive tax cut that would substantially contribute to the causes of the Great Depression. Republican Sen. George Norris of Nebraska said that Mellon himself would reap from the tax bill “a larger personal reduction [in taxes] than the aggregate of practically all the taxpayers in the state of Nebraska.” The same is true now of Donald Trump, the Koch Brothers, Sheldon Adelson and other fabulously rich people.

During the 1920s, Republicans almost literally worshiped business. “The business of America,” Coolidge proclaimed, “is business.” Coolidge also remarked that, “The man who builds a factory builds a temple,” and “the man who works there worships there.” That faith in the Market as God has been the Republican religion ever since. A few months after he became president in 1981, Ronald Reagan praised Coolidge for cutting “taxes four times” and said “we had probably the greatest growth in prosperity that we’ve ever known.” Reagan said nothing about what happened to “Coolidge Prosperity” a few months after he left office.

The crash followed a decade of Republican control of the federal government during which trickle-down policies, including massive tax cuts for the rich, produced the greatest concentration of income in the accounts of the richest 0.01 percent at any time between World War I and 2007 (when trickle-down economics, tax cuts for the hyper-rich, and deregulation again resulted in another economic collapse).

In 1929, the share of income captured by the top .01 percent (the über-rich, whose income share is indicated in the blue line in the chart above) reached 4 percent, and their share of wealth (the red line) even higher: 10 percent. Much the same kind of inequality existed in 2008, when the top .01 percent shares of income and wealth were 4.1 percent and 8.6 percent, respectively—on the eve of the Second Great Depression.

And now Coolidge’s Republican descendants are attempting to ram through a set of tax cuts that will allow those in the top .01 percent to keep more of their extraordinary income and to accumulate even more wealth.

All the while claiming that the benefits will trickle down to the rest of us.

Republican policies in the ’20s instead pushed to concentrate more of the income at the top. Nine decades later, Republicans are rushing to do it again — and they are sprinting toward an economic cliff. Another round of Government of the People, by the Republicans, for the super-rich will be catastrophic. The American people must call a halt before it’s too late.