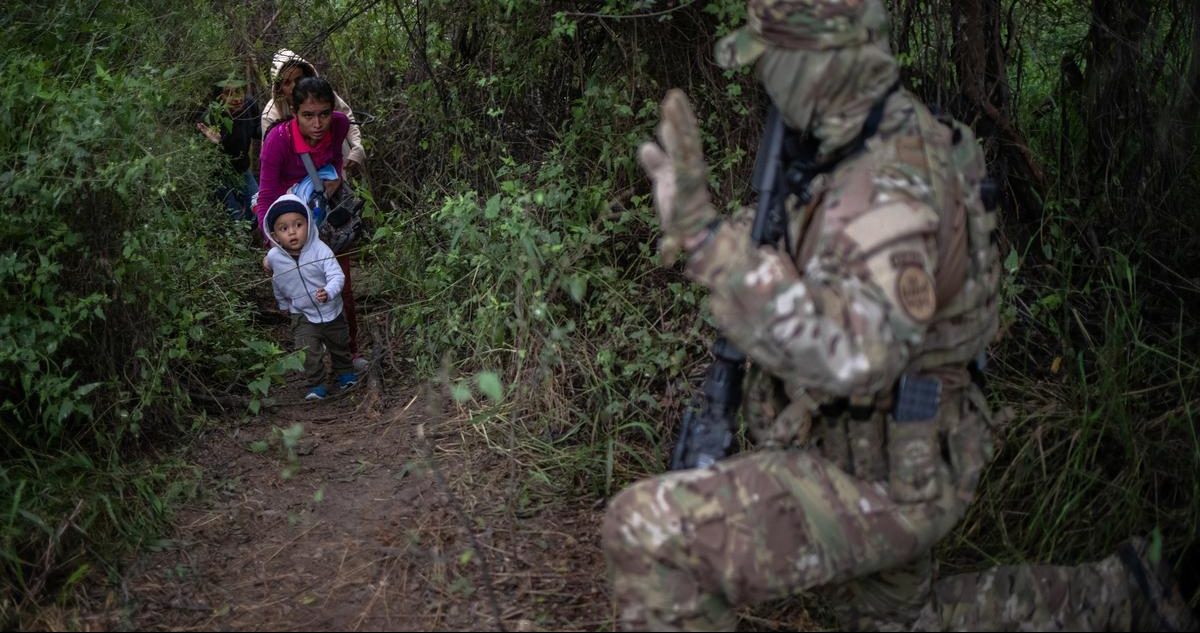 Above photo: A member of the U.S. Border Patrol Tactical Unit (BORTAC) and a family after they crossed the Rio Grande river into the United States from Mexico in Fronton, Texas, October 18, 2018. REUTERS/Adrees Latif

Trouble at the Border

Yes, we have a serious problem at the border — indeed, at every border we create and defend with force of arms and bureaucratic indifference.

“‘If you want water, just drink from a toilet.’ That’s what border patrol told one thirsty woman we met on today’s #DemsAtTheBorder trip. These are the same CBP personnel who threatened to throw burritos at members of Congress. Changes must be made.”

So tweeted U.S. Rep. Judy Chu in the wake of a visit by congressmen and women to Texas border facilities last week, stirring even further incredulity and disgust about the nature of these American concentration camps for immigrants.

The problem we have is ourselves.

In the process of defining ourselves in “us vs. them” terms —obsessively protecting ourselves from an enemy — we jettison our values and become everything we pretend not to be. Defining a particular group as the enemy gives one permission to dehumanize that group. This is the essence of militarism. It’s also called racism.

Just prior to the congressional delegation’s border visit last week, organized by the House of Representatives Hispanic Caucus, ProPublica published a disturbing story about a secret Facebook group for current and former Border Patrol agents called “I’m 10-15.” The term is Border Patrol code for “aliens in custody,” writes A.C. Thompson. The three-year-old group has about 9,500 members.

Some of these members “shared derogatory comments about Latina lawmakers who plan to visit a controversial Texas detention facility on Monday, calling them ‘scum buckets’ and ‘hoes,’” according to the article.

They also “joked about the deaths of migrants, discussed throwing burritos at Latino members of Congress visiting a detention facility” and posted several illustrations unrestrained in their vulgarity, making fun of Rep. Alexandria Ocasio-Cortez.

“In another thread, a group member posted a photo of a father and his 23-month-old daughter lying face down in the Rio Grande . . . . The member asked if the photo could have been faked because the bodies were so ‘clean,’” exclaiming, “I HAVE NEVER SEEN FLOATERS LIKE THIS.”

Joaquin Castro, head of the Hispanic Caucus, said, according to ProPublica, the site “confirms some of the worst criticisms of Customs and Border Protection. These are clearly agents who are desensitized to the point of being dangerous to migrants and their co-workers” and they “don’t deserve to wear any uniform representing the United States of America.”

Here’s the thing. This is situation normal at the American border — and by “border” I mean every confrontational setting between America’s armed protectors and a defined enemy. These settings are both internal and external.

Fascinatingly, barely a month before the ProPublica revelations were published, something called the Plain View Project hit the news. As I wrote at the time: “The project, an exhaustive, two-year analysis of social media posts by some 2,800 police officers and 700 former officers, from police departments across the country, revealed another non-surprise: a racist subculture permeates American police forces.”

Thousands of such posts, I noted, which are from officers’ personal Facebook pages, can be seen at the Plain View website. For instance: “It’s a good day for a choke hold.” “Death to Islam.” “If the Confederate flag is racist, then so is Black History Month.” And, as though in solidarity with the Border Patrol: “Sooner or later they end up in a cage, where (they) belong.”

The parallels are so naked, so obvious: When you define particular people as the enemy and arm yourself against them, you also dehumanize them. A father and his 2-year-old daughter, who drowned trying to cross the Rio Grande, become “floaters.” Their lives don’t matter in the least. And when people holding such views are wearing official government uniforms (not KKK robes), their actions are in our names.

The crucial point to make here is that this is not about “bad apples.” It’s about a culture of militarism, which, unavoidably, equals a culture of racism. How can it not? The enemy is killable, which means he and she — and their children — must be dehumanized.

This was made gruesomely clear to me when I attended the Winter Soldier hearings outside Washington, D.C., in 2008. Indeed, this was the focal point of a panel discussion called “Racism and War: The Dehumanization of the Enemy.” The panelists talked about how they learned contempt and disgust for all Iraqis and how it manifested on the ground in Iraq.

“I joined the Army on my 18th birthday,” said panelist Mike Prysner. “When I joined I was told racism was gone from the military. After 9/11, I (began hearing) towel head, camel jockey, sand nigger. These came from up the chain of command. The new word was hadji. A hadji is someone who takes a pilgrimage to Mecca. We took the best thing from Islam and made it the worst thing.”

And Geoff Millard: “Hadji was used to dehumanize anyone there who is not us. KBR employees who did our laundry became hadji. Not a person, not a name, but a hadji. ‘They’re just hadjis. Who cares?’ The highest ranking officer, Gen. Casey, used the word. He called Iraqi people hadjis. These things start at the top, not the bottom.”

We cannot prepare to kill others without first dehumanizing them. This is the foundation of military culture, and I fear it pervades all our armed agencies. There are no obvious or simple solutions, like tougher enforcement of political correctness by governmental higher-ups.

For now, the best I can say is this: Change – setting aside our weapons, redefining what it means to be safe – begins with awareness.

“These aren’t people. These are animals.”

These words alone set off the alarm — the fascism alarm, you might say. Donald Trump is by no means the sole source of America’s democracy nosedive, but he’s its current, deeply troubling manifestation.

Should I write this week about the wars he wants to wage or the refugee border cages he continues to fill? They’re all connected, by their domination and punishment mindset, their subservience to war profiteering and the geopolitics of empire, their ignorant certainty that American exceptionalism is the cornerstone of national security, their indifference to human suffering and need.

“We were in American concentration camps. We were held under indefinite detention. We were without due process of law. We were charged without any evidence of being a threat to national security, that we were in an unassimilable race, that we would be a threat to the economy.”

The speaker is Satsuki Ina, a woman who spent part of her childhood at a Japanese-American internment camp during World War II and who, with fellow childhood internees, recently stood in protest at Fort Sill, Oklahoma, a U.S. military base slated to become a detention center for 1,400 immigrant children.

“We hear these exact words today regarding innocent people seeking asylum in this country,” she went on. “And unlike 1942, when America turned their back on us while we were disappearing from our homes, our schools, our farms and our jobs, we are here today to speak out, to protest the unjust incarceration of innocent people seeking refuge in this country. We stand with them, and we are saying, ‘Stop repeating history.’”

The only way to avoid repeating history is to face it squarely and atone for it. There’s a hell of a lot of history this country has not yet faced, but the Trump administration, with its blatant disregard for political correctness, is making it front-page news.

Indeed, you might say that Trump the blowhard is at best an amateur fascist, failing, as he so often does, to hide U.S. aggression behind established clichés. Thus, during the Obama administration, border internment wasn’t news at all, but Trump has managed to expose the hellish conditions and the ripped-apart families to the world.

Recently, for instance, Rep. Alexandria Ocasio-Cortez generated some indignant outrage when she tweeted, referencing an article in Esquire, that the United States has created a system of concentration camps to detain the asylum seekers flooding into the country from Central America. That was too much for Liz Cheney, who counter-tweeted: “Please @AOC do us all a favor and spend just a few minutes learning some actual history. 6 million Jews were exterminated in the Holocaust. You demean their memory and disgrace yourself with comments like this.”

But in point of fact, these are concentration camps. Historian Andrea Pitzer, quoted by Jack Holmes in the Esquirearticle that AOC cited, defines “a concentration camp system” simply and logically enough as “mass detention of civilians without trial.”

That doesn’t mean they’re the equivalent of Nazi death camps, but the term’s reverberations are legitimately troubling, because the process it defines is the same: dehumanizing a group of people based on race, religion, ethnicity or whatever (“These aren’t people. These are animals”); fomenting fear that their presence constitutes a “national emergency”; conducting mass roundups and detaining the arrestees indefinitely.

What could go wrong?

As Pitzer writes in her book, One Long Night: A Global History of Concentration Camps: “There’s this crystallization that happens. The longer they’re there, the worse conditions get. That’s just a universal of camps.”

Some of these declining conditions were recently described on Democracy Now! by lawyer Warren Binford, who interviewed children at a detention facility in Clint, Texas: “(V)irtually no one is taking care of these children directly . . . they are locked up in these cells 24 hours a day. There are open toilets in many of these cells. There’s no soap, no way to wash their hands. . . . And many of them are being forced to sleep on concrete because of a shortage of beds and mats and sleeping space. Children described sleeping on concrete floors. They described sleeping on cement blocks.”

And, my God, when the children get sick, they’re placed in quarantine under conditions that are “just horrendous. These very sick children, with high fevers . . . being put on the floor, on mats, largely unsupervised, locked up together for days at a time.”

And Holmes points out: “Another issue is that these camp systems, no matter where they are in the world, tend to fall victim to expanding criteria. The longer they stay open, the more reasons a government finds to put people in them. That’s particularly true if a new regime takes control of an existing system, as the Trump administration did with ours.”

Thus, asylum seekers once had legal rights, but not anymore. As their numbers increased, due primarily to worsening conditions in Guatemala, El Salvador and Honduras (countries the United States helped ravage politically), virtually all the refugees started getting treated as “illegals.” And, writes Holmes: “There is reason to believe the criteria will continue to expand.”

These are American concentration camps, not simply in the tradition of the Japanese-American internment camps of World War II, but in that other tradition as well, across the ocean. They’re not death camps, but they’re evolving, I fear, in much the same moral and political void.