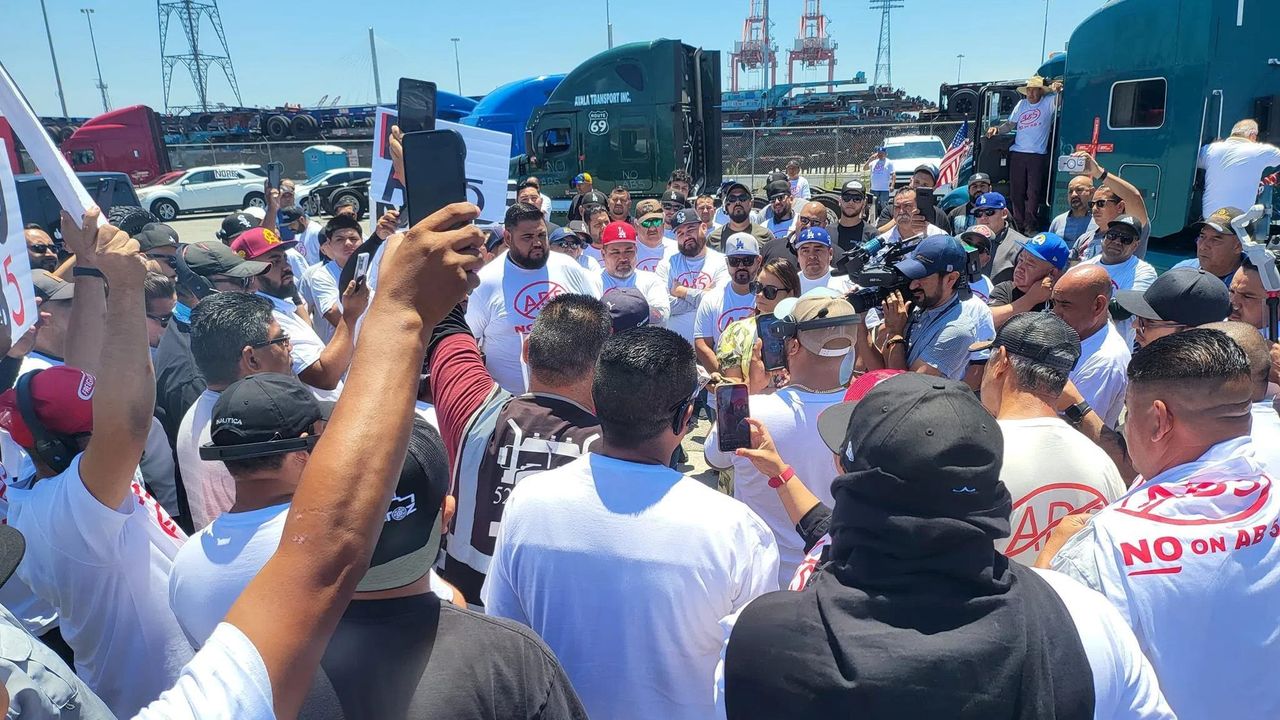 Trucker Protests Bring Work At Port Of Oakland To A Halt

For the third consecutive day, hundreds of independent truckers protested Wednesday at the Port of Oakland. The truckers’ main demand is the repeal of provisions in California State Assembly Bill 5 (AB5), which would eliminate much of the independent trucking industry on the docks. Hundreds of truckers blocked the entrances to the docks with their trucks, bringing operations to a standstill.

Similar actions have taken place throughout the state, and are being loosely organized through informal social networks and social media. The protests in Oakland have grown significantly since Monday, when roughly 100 truckers took part. This grew Tuesday to between 900 and 1000, according to FreightWaves. Operations were heavily impacted Wednesday. The action is set to continue through the week, and truckers are also discussing the possibility of a demonstration at the state capital of Sacramento.

According to FreightWaves, roughly 100 dock workers honored the picket line Tuesday, blocking the TraPac and Everport terminals and shutting down most container movement at the port. This is all the more significant given that the International Longshore and Warehouse Union has kept 22,000 dockworkers across the West Coast on the job for nearly three weeks since their contract expired July 1. The Biden administration has been working closely with both parties to prevent a work stoppage on the ports. Even though the PMA is demanding major concessions on automation and working hours, the ILWU issued a joint statement with the PMA last month declaring it had no intention of calling a strike.

This is motivated in large part by concerns that work stoppages at West Coast ports, which collectively handle roughly 40 percent of the country’s imports and a comparable fraction of exports, could disrupt ongoing war efforts. Most US weapons arming NATO proxy forces in Ukraine are shipped from seaports. Meanwhile, the US is actively ratcheting up tensions with China over Taiwan, which could require rapid deployments of military-related materials from West Coast ports.

But the support for the truckers strike has not only revealed anger and discontent with the ILWU’s “strategy,” it also threatens to upend the well-laid attempts to bureaucratically strangle the class struggle on the docks. “We are working without a contract right now so we support the owner-operators and understand what they are trying to do,” George, an ILWU member with nine years, told FreightWaves.

Across the US and the world, a mood of rebellion is taking hold among truckers and other freight workers. Truck drivers in South Korea struck for eight days in June, virtually shutting down ports all over the country, against skyrocketing fuel prices and a payment structure that encourages dangerous driving to speed up deliveries. This week, dock workers at six major seaports in Germany launched their third strike this year, and dock workers in the United Kingdom voted this week to authorize strike action, demanding wages that keep pace with the high rate of inflation.

Late last year, truckers across the US organized a boycott of the state of Colorado the 110-year sentencing of Rogel Aguilera-Mederos, a 23-year-old trucker, for a fatal accident. This forced the Colorado governor to back down and reduce his sentence to 10 years.

Owner-operators represent roughly two thirds of California’s port truckers, and trucks, in turn, are the primary land-based method of moving cargo in and out of California’s ports. At present, these truckers are dispatched on a contract basis by logistics companies, while truckers own and maintain their own vehicles.

The AB5 law affects a broad swathe of the state’s workforce, including Uber drivers who are also classified as independent contractors and therefore exempted from receiving a guaranteed hourly wage and benefits. But it would also affect an estimated 70,000 owner-operators in the trucking industry, allowing companies to hire them for contract work only if it “is outside the usual course of the hiring entity’s business,” i.e. owner-operators cannot be contracted by a port trucking company to move cargo in and out of ports. This would force owner-operators to either sell their trucks and become direct employees of a company, move out of state, or start their own independent businesses and cover substantial administrative and insurance fees and paperwork. By some estimates, the latter option could incur costs of $20,000 per year for drivers already struggling to break even.

This is not simply a defect in the law’s language. Co-authored substantially by the unions, by reclassifying truckers as employees, the law would open up the port truckers for an expansion in the unions’ dues-paying membership base. The unions, once establishing a foothold, would then bargain away wages and benefits much as they have with unionized truckers, such as car haulers in the auto industry and long-distance truckers at UPS. Doug Bloch, a political director for the Teamsters Union, criticized trucking associations for not “educating” their members enough on the new law, in comments to the San Jose Mercury News.

The ILWU leadership has essentially come out in opposition to the trucker protests. In a cautious, tersely-worded statement which avoided directly referencing the protests, ILWU International Vice President Bobby Olvera Jr. has stated that “The ILWU believes collective bargaining is fundamental to workplace fairness and safety, as well as a foundation of democratic society. That’s why we support AB5: It aims to stop employers from misclassifying workers in order to stop these workers from forming unions and improving their lives.”

The orientation of the ILWU is entirely to the institutional report it receives from the government and the Democratic Party in particular. It is eager to demonstrate its usefulness in suppressing opposition. On Tuesday, an ILWU Twitter account tweeted a statement declaring the union’s “solidarity” with the United Rail Unions “and their 115,000 members.” Railroad workers, whose have worked without a contract for three years under intolerable conditions, voted by 99.5 percent to authorize strike action, but the rail unions instead agitated for months for the White House to intervene in a bid to reach a mediated settlement, effectively demanding that the Biden Administration illegalize a strike by their own members. This is what actually took place Friday when Biden announced the appointment of a Presidential Emergency Board to intervene in contract talks.

The ILWU statement does not even mention this union-backed government intervention, because doing so would highlight the essentially same role which they are playing on the docks. It quotes ILWU president Willie Adams, who singled out for praise the fact that railroaders “heroically stayed on the job [during the pandemic] without a contract or raise.” This was not by choice, however, but because a strike blocked by the rail unions and onerous anti-worker labor laws. But for Adams and the ILWU, throwing overboard the bedrock principle of “no contract, no work,” “working without a contract or raise” is a model which they want dockworkers to emulate.

Dockworkers should turn out as broadly as possible in support of the truckers. Whether or not the truckers remain as independent contractors is a decision that should be made by truckers themselves, and not bureaucratically enforced on them. To develop their own power, and challenge the stonewalling of the ILWU bureaucracy, dockworkers must unite with truckers and railroaders and build a powerful rank-and-file movement, controlled by workers themselves.