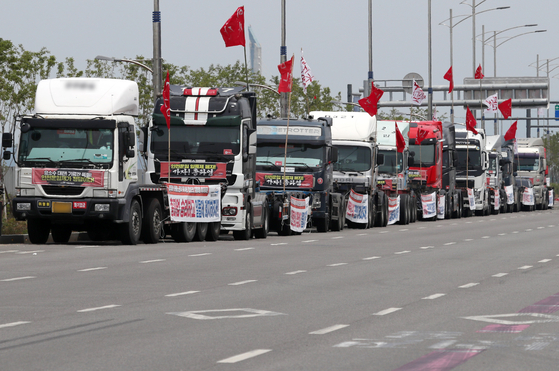 Above Photo: Trucks parked near a container terminal in Incheon on Sunday. Unionized truck drivers continued their strike on Sunday for a sixth day. NEWS1.

Striking truck drivers are disrupting the operations of a wide range of business, including ready-mix concrete producers, automakers and restaurants.

Hyundai Motor is struggling to move finished cars so it can make more cars, while more than half of the country’s ready-mix concrete factories have suspended operations due to a halt in the shipment of cement.

Unionized truck drivers have been on a strike since Tuesday demanding higher wages and an extension of support measures, which expire at the end of this year. They blocked gates at distribution centers and refused to transport cargo. Cargo Truckers Solidarity, a union, is leading of strike, and more than 7,000 people are participating, according to local media reports.

About one-third of all unionized truckers have joined in, though the number varied by the day.

The truck drivers and the government have been negotiating all weekend but have so far failed reach a compromise.

Without trucking available, Hyundai Motor employees had to drive completed cars from its Ulsan factory to a yard for storage. Completed cars have to be transported to the yard for new automobiles to be manufactured. Production at the Ulsan factory, which normally makes 6,000 cars a day, has been cut in half.

A shortage of components is also affecting the production of vehicles, while Hyundai Motor subcontractors may themselves have to reduce production.

If Hyundai Motor “halts the production line, it will tell us to stop delivering components as soon as tonight, then we will have to suspend production,” said a spokesperson for a Hyundai Motor subcontractor.

“Supply disruptions will start for popular cars if the strike continues for more than a week,” said a spokesperson for the Korea Auto Industries Coop. Association.

Three of nine ready-mix concrete manufacturers in North Chungcheong halted operation because concrete was not supplied in time. The output level at the remaining six companies has been reduced to 10 to 20 percent of normal.

The total quantity of goods transported to and from 10 terminals at Busan port was only around 30 percent of the level before the strike on Thursday.

Some companies, including Posco, are using railroads or ships to transport goods that require urgent delivery.

The self-employed have also fallen victim to the strike.

“There has been a disruption in supply of soju,” said a 54-year-old restaurant operator in Daejeon.

Total output released from Hite Jinro’s factory in Cheongju, North Chungcheong, has fallen to 40 percent of the normal rate.

Some gas station operators are concerned about having to temporarily close if petroleum products are not supplied.

“Car owners as well as nearby factory operators will face damages if oil isn’t supplied,” said a gas station operator in South Jeolla.

More than 40 people were arrested for obstruction of business since the strike began.

“The unionized truck drivers are adding pressure to Korea’s economy by refusing en masses to transport even before Covid-19 is completely over,” said Lee Jeong-sik, Minister of Employment and Labor.

“The Korean economy is facing triple risks from global supply chain disruptions, the rise in raw material prices and the rise in transportation fees,” said six business organizations, including the Korea Chamber of Commerce & Industry and the Korea Enterprises Federation, in a joint statement on Sunday.

“As the unionized truck drivers collectively refuse to transport for this extended period, the supply of cement, petrochemicals, steel, cars and electronic appliances have also been disrupted, causing massive damage to manufacturing and trade, which are the foundation of the Korean economy.”