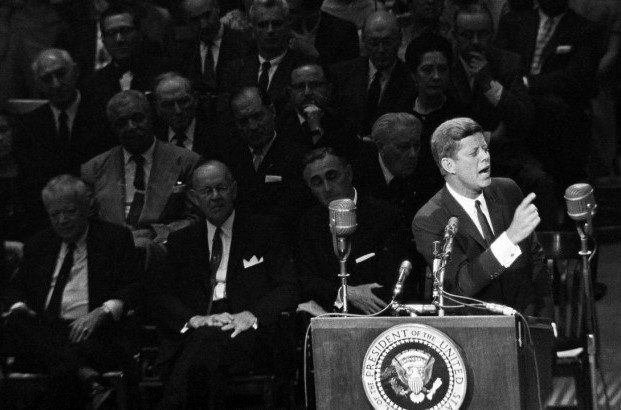 Trumpcare Is Dead. ‘Single Payer Is The Only Real Answer’

Above Photo: AP.  President John F. Kennedy gestures during his speech before a rally on medical care for the aged at New York’s Madison Square Garden on May 20, 1962.

THANKS TO A PAIR of defections from more GOP senators late yesterday, the Republican plan to repeal and replace or simply repeal the Affordable Care Act is dead — for now.

But the health care status quo is far from popular, with 57 percent of Americans telling Gallup pollsters in March that they “personally worry” a “great deal” about health care costs.

Many health care activists are now pushing to adopt what is called a “single payer” health care system, where one public health insurance program would cover everyone. The U.S. currently has one federal program like that: Medicare. Expanding it polls very well.

One of the activists pushing for such an expansion is Max Fine, someone who is intimately familiar with the program — because he helped create it. Fine is the last surviving member of President Kennedy’s Medicare Task Force, and he was also President Johnson’s designated debunker against the health insurance industry.

Fine, now 91, wrote to The Intercept recently to explain that Medicare was never intended to cover only the elderly population, and that expanding it to everyone was a goal that its architects long campaigned for.

“Three years after the enactment of Medicare, in Dec. 1968, a Committee of 100 leading Americans was formed to campaign for single payer National Heath Insurance.  The campaign leaders were UAW pres. Walter Reuther, Dr. Michael DeBakey, Nat. Urban League Pres Whitney Young and Mary Lasker, a leader in the formation and funding of NIH,” he wrote.”The NY Times and other newspapers gave front page play to the announcement of the campaign for ‘Medicare for All’ but the Committee gained even more attention when, shortly before xmas, pres-elect Nixon, emerging from his doctor’s office in San Diego, denounced us as socialists who were trying to create a problem when none existed.”

Fine noted that this movement towards single payer has “risen and fallen over the years,” reaching a high point in the early 70s when former Democratic Massachusetts Sen. Ted Kennedy’s bill covering all Americans with government health insurance had 36 co-sponsors.

But the Democratic Party decided to go a different direction, turning instead to private insurance to cover Americans. Fine said he met with former First Lady Hillary Clinton’s health care task force in the early 1990’s, and advised them to incrementally expand Medicare, starting first with children and then lowering the age for the elderly.

“They had the money but not the interest in the idea,” he lamented, “instead spending a year developing a complex bill that was DOA on [Capitol] Hill.”

Shortly after Trump won the nomination to be the Republican Party’s presidential contender, Fine wrote to his campaign to offer him a plan to expand Medicare. “Start with Medicare for children and all military vets (half are already under Medicare because they are over 65), then 60-65, etc. etc,” Fine said he advised. “An important conservative result: the VA hospital system would became available to all, for services and for badly-need additional training hospitals for young doctors.”

After the death of the Senate healthcare bill yesterday, The Intercept reached out to Fine for comment about where Congress should go next. “Single payer is the only real answer and some day I believe the Republicans will leap ahead of the Democrats and lead in its enactment,” he speculated, “just as did Bismarck in Germany and David Lloyd George and Churchill in the UK.”

Otto Von Bismarck, a conservative German leader known as one of the fathers of the welfare state — the Social Security Administration even maintains a webpage honoring him for establishing the first public retirement program in the world — helped establish the foundations of the modern German health insurance system in 1883.

David Lloyd George was a member of the British Liberal Party (the successors to the Whigs, not to be confused with the Labour Party) who was inspired by Von Bismarck’s work in Germany. He spearheaded the passage of the National Insurance Act of 1911, which created a system of health insurance to cover industrial workers.

And although Winston Churchill was not the driving force behind the establishment of the United Kingdom’s National Health Service, he both supported it in theory and later prevented his fellow Tories from strangling it during his 1951 to 1955 tenure as prime minister.

All three are examples of conservative politicians coming to terms with popular demands for the government to act to prevent their citizens from being financially destroyed by sickness and injury. It remains to be seen whether the GOP will learn the same lesson.