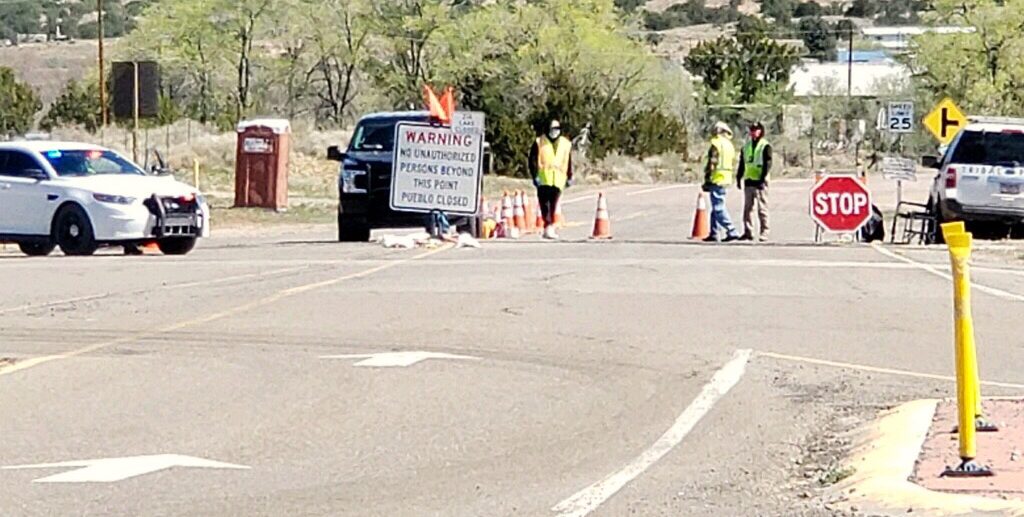 Above photo: Zia Pueblo erected barricades and a checkpoint at the entrance to their community. Trip Jennings/New Mexico In Depth.

UPDATE: In an announcement on Tuesday morning, the Trump administration indeed announced the release of the $8 billion coronavirus relief fund promised to tribal governments.

According to the announcement, only $4.8 billion, or 60 percent of the fund, is going out at this time. It will be based on “population data used in the distribution of the Indian Housing Block Grant” funds. Notably, such data was not required of tribes when they submitted their certification forms to the Trump administration in April 2020.

The remaining 40 percent is to be based on tribal employment figures, which were submitted as part of the certification. However, the announcement also says these payments will be tied to “further data to be collected.”Additionally, “Payments to tribes based on employment and expenditure data will be made at a later date,’ the announcement reads.

As for Alaska Native regional and village for-profit corporations, any payments to them will not be made pending the outcome of litigation in federal court. This does not affect tribes in Alaska, as they will receive payments regardless of the litigation.

President Donald Trump is preparing to take credit for releasing the $8 billion coronavirus relief fund that his own administration has held up for more than a month, helping a vulnerable Republican along the way.

On the eve of a visit to Arizona on Tuesday, the White House has been finalizing a “fact sheet” that promotes his administration’s initiatives in Indian Country. Though the document so far only takes up about one page, the first bullet item in the draft touts Trump’s signing of the Coronavirus Aid, Relief and Economic Security Act on March 27.

The law, also known as the CARES Act, directs the Department of the Treasury to distribute the $8 billion to tribal governments “not later than 30 days” after its enactment. The deadline has come and gone even as outcry over the Trump administration’s failure to release the funds grows in Indian Country.“

Indian Country is tired of waiting for the administration to follow the law by delivering pandemic aid to our communities and our people,” President Bryan Newland of the Bay Mills Indian Community said on Monday, more than a week after the CARES Act deadline passed.“

Our lives and our livelihoods are at stake,” said Newland, citing the growing number of COVID-19 cases in tribal communities, some of which have been disproportionately affected by the deadly disease.“

Quit telling us to wait,” he said.

“Defendant has not yet arrived at a determination as to the amounts to be paid to Tribal governments from the #CoronavirusReliefFund under Title V of the #CARESAct.”

But instead of releasing the fund on time as directed by Congress and as promised in federal court, Trump appears ready to use the $8 billion for political gain. His visit to Phoenix on Tuesday features Sen. Martha McSally (R-Arizona), whose coronavirus relief efforts are playing heavily into her re-election campaign.

McSally, who is trailing Democratic challenger Mark Kelly by wide margins in several polls, has in fact taken credit for ensuring the $8 billion was included in the CARES Act. Even though her Republican party controls the U.S. Senate, she has told tribal leaders and advocates that she had to fight for its inclusion in the final package.“

I won’t bore you with all the knife-fighting that had to happen here,” McSally, a member of the Senate Committee on Indian Affairs, said during a town hall shortly before the enactment of the law last month.

But “bore” the crowd she did. McSally boasting of going “to the mat” with high-level officials from the White House and from the office of Sen. Mitch McConnell (R-Kentucky), the Republican Senate Majority Leader, telling listeners that $8 billion almost didn’t end up in the bill at all.“

I told them, ‘We’ve gotta get this money for the tribes!'” McSally said on the call. “It has to happen!”

With her future in the Senate at stake in a state where Native Americans have been hard hit by the coronavirus, McSally has promoted other CARES Act efforts as well. One of the biggest also happens to involve Treasury, whose handling of the Paycheck Protection Program has come under fire in Indian Country.Tribal gaming establishments were excluded from the $349 billion set aside by the CARES Act based on Treasury’s disputed interpretation of the law when the program was launched on April 3. But instead of fixing the problem, tribes again had to wait for a consultation session almost two weeks later only to see the money dry out on April 16.

Following bipartisan outcry on Capitol Hill, it wasn’t until April 24 that Treasury confirmed that small Indian gaming facilities were eligible for loans after Congress provided another $320 billion for the program. McSally was quick to take credit again, gathering support from tribal leaders in the process.

“The Navajo Nation thanks Senator McSally for listening to the concerns of the Navajo Nation Council,” Seth Damon, the Speaker of the legislative body on the largest reservation in the United. States, said in a news release distributed by her office. “

Her direct advocacy on behalf of the Navajo people has been a crucial element in the Council’s ongoing efforts to protect the employees of our tribal enterprises. This is a positive step forward for our nation at this very critical moment.”The Navajo Nation suffers from the third highest rate of COVID-19 infections, per capita, in the U.S. As of May 4, there have been 2,474 positive cases and 73 deaths on the reservation, where tribal leaders have repeatedly complained about the slow-moving nature of federal resources from Washington.“

The Navajo Nation has one of the worst COVID-19 outbreaks in the country and isn’t even close to getting the support they need,” Kelly, a former astronaut whose campaign treasurer is a Navajo citizen, said on social media over the weekend.

With President Trump set to visit #Arizona, members of Congress, Republican and Democrat alike, want to know why the $8 billion #CoronavirusReliefFund hasn’t been paid to tribal governments are promised by the #CARESAct. #Coronavirus #8BillionQuestions https://t.co/ZcTfaEfR5z pic.twitter.com/3vd8cxYJac

Democrats have made a major issue of the $8 billion coronavirus relief fund (CRF), with a growing number of them calling on the Trump administration to release the money. They have been able to steal the spotlight in recent days, with most Republicans unwilling — at least publicly — to criticize Trump and his leadership.

A letter sent to Secretary of the Treasury Steve Mnuchin on Friday represents a prime example of the politics behind the issue. While more than 20 Democrats and one Independent signed on, only one Republican — Sen. Jerry Moran (R-Kansas), who serves on the Senate Committee on Indian Affairs like McSally — did.“

The pressing need for CARES Act resources to combat COVID-19 in Native communities across the country is indisputable,” the letter reads. “

Given our shared responsibilities under the United States’ trust and treaty obligations, we respectfully request that the Department immediately disburse the $8 billion in CRF so that tribal governments have access to the funds they were promised.”

The $8 billion in critical relief funds in the CARES Act intended for federally recognized Tribal governments needs to be released IMMEDIATELY.

The deadline to distribute funds was April 26. This delay is costing lives.

Trump and McSally are heading out from Washington on Air Force on Tuesday morning. They are scheduled to land in Phoenix shortly before noon, Mountain time, according to the schedule for the day.

Shortly after their arrival, Trump is slated to participate in a “roundtable” on Native American issues at noon, according to the schedule. The fact sheet, which is being finalized this morning, is expected to be released to help the mainstream media in their reporting on Indian Country.

In addition to mentioning the CARES Act, a draft version of the fact sheet states that Trump was the “first” president to issue a proclamation in honor of National Day of Awareness for Missing and Murdered Indigenous Women, which falls on May 5. The efforts originated among Native women leaders in tribal and urban Indian communities to highlight the large numbers of women and girls who disappear and are victims of homicide.

While the U.S. Senate has been commemorating the day since 2017, Trump issued his proclamation in 2019. He did so from Washington, late in the day on a Friday before May 5, generating almost no attention from the media on the issue.

Later in the year, Trump signed an executive order establishing the White House Task Force on Missing and Murdered American Indians and Alaska Natives. He was joined at the event by a small group of tribal leaders.