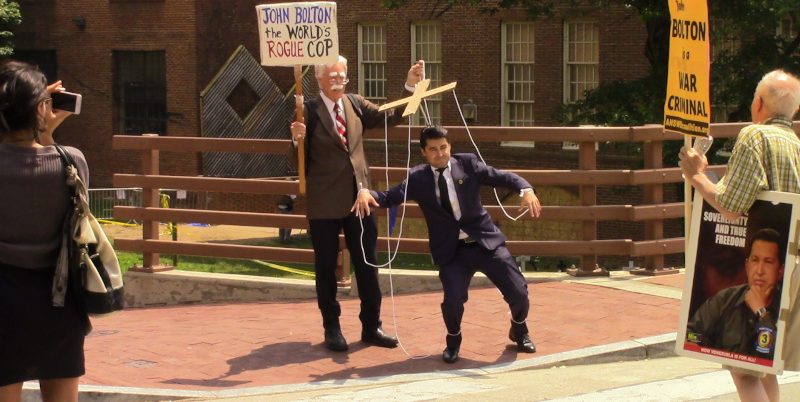 The Embassy building had been occupied at the request of the elected Government of Venezuela for 36 days by the Civilian Protection Collective which was organized by CODEPINK: Women for Peace, ANSWER and Popular Resistance. Over 50 members of the collective spent varying periods of time inside the building. In the first weeks, educational events were held in the building.The Trump administration had allowed the Guaido faction to take over two Venezuelan military buildings and the Ambassador’s residence in Washington and the Venezuelan consulate in New York City in March 2019.

1. The premises of the mission shall be inviolable. The agents of the receiving State (in this case the U.S.) may not enter them, except with the consent of the head of the mission.

2. The receiving State is under a special duty to take all appropriate steps to protect the premises of the mission against any intrusion or damage and to prevent any disturbance of the peace of the mission or impairment of its dignity.

3. The premises of the mission, their furnishings and other property thereon and the means of transport of the mission shall be immune from search, requisition or execution.

On May 13, the Washington, D.C Metropolitan Police read a statement on their police car loudspeaker system that they pretended was an official law enforcement notification of trespass. Remarkably they later handed copies of what they read to persons in the crowds outside the Embassy.

The document was undated, unsigned and had no letterhead or seal to determine who was the originating authority.

This property, located at 1099 30th St NW, Washington, D.C. 20007, belongs to the Bolivarian Republic of Venezuela, a foreign government. Additionally, a portion of this property is utilized by Venezuela as its Permanent Mission to the Organization of American States, an international organization. This property is use for official business and diplomatic purposes. The United States of America recognizes Ambassadors Vecchio and Tarre as the representatives of Venezuela with lawful control over the property.

Representatives of the Embassy Protection Collective remained in the Embassy until U.S. Federal police broke down doors to the Embassy in violation of the 1961 Vienna Convention on Diplomatic and Consular and arrested and removed the last four on May 15 after 36 days inside the Embassy.

Ironically, the four who were protecting the Embassy on behalf of the elected Government of Venezuela were charged with violation of 18 U.S. Code §”118. “Interference with certain protective functions.”

The statute reads: “Any person who knowingly and willfully obstructs, resists, or interferes with a Federal law enforcement agent engaged, within the United States or the special maritime territorial jurisdiction of the United States, in the performance of the protective functions authorized under section 37 of the State Department Basic Authorities Act of 1956 (22 U.S.C. 2709) or section 103 of the Diplomatic Security Act (22 U.S.C. 4802) shall be fined under this title, imprisoned not more than 1 year, or both.”

The next court hearing for the four-Medical Doctor Margaret Flowers, Attorney Kevin Zeese, both of whom have run for the U.S. Senate from Maryland, Dr. Adrienne Pine, an American University professor and Bay Area and Latin American activist David Paul will be June 12 in Federal Court in Washington, DC.