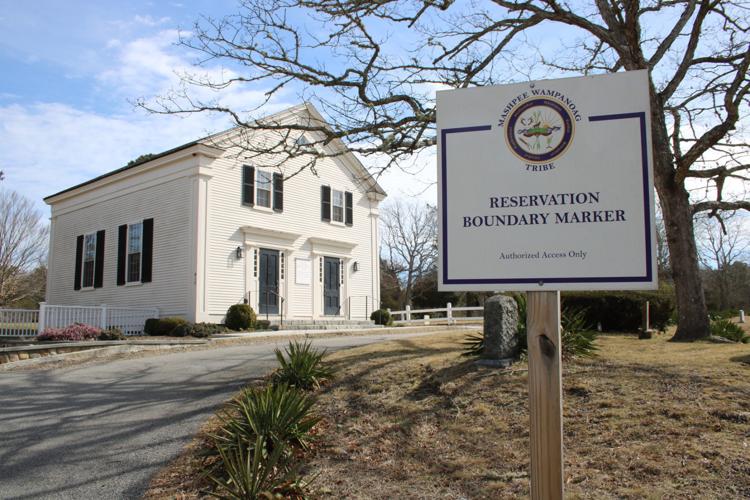 Above Photo: The Old Indian Meeting House lies on reservation land in the Town of Mashpee. RYAN SPENCER/ENTERPRISE

At 4:00 pm today — on the very day that the United States has reached a record 100,000 confirmed cases of the coronavirus and our Tribe is desperately struggling with responding to this devastating pandemic — the Bureau of Indian Affairs informed me that the Secretary of the Interior has ordered that our reservation be disestablished and that our land be taken out of trust.  Not since the termination era of the mid-twentieth century has a Secretary taken action to disestablish a reservation.

Today’s action was cruel and it was unnecessary. The Secretary is under no court order to take our land out of trust.  He is fully aware that litigation to uphold our status as a tribe eligible for the benefits of the Indian Reorganization Act is ongoing.

It begs the question, what is driving our federal trustee’s crusade against our reservation?

Regardless of the answer, we the People of the First Light have lived here since before there was a Secretary of the Interior, since before there was a State of Massachusetts, since before the Pilgrims arrived 400 years ago.  We have survived, we will continue to survive.  These are our lands, these are the lands of our ancestors, and these will be the lands of our grandchildren.  This Administration has come and it will go.  But we will be here, always.  And we will not rest until we are treated equally with other federally recognized tribes and the status of our reservation is confirmed.

I will continue to provide updates on this important issue in the coming days as we take action to prevent the loss of our trust status.

The secretary of the Department of the Interior has ordered that the Mashpee Wampanoag Tribe’s reservation land be disestablished, Tribal Council chairman Cedric Cromwell said in a statement posted to the tribe’s website on Friday, March 27.

The decision returns the property, which had been held in trust by the federal government as reservation land, to the tribe and disestablishes the reservation, placing projects on the land in limbo.

The chairman noted that the Interior Department’s action comes as the United States confronts the COVID-19 pandemic, which had infected more than 100,000 across the nation and 100 on Cape Cod as of Friday.

The tribe’s community and government center in Mashpee has been closed in response to the virus for more than 10 days.

The decision to disestablish the tribe’s land-in-trust comes a month after the First US Circuit Court of Appeals upheld a federal judge’s decision that the Interior Department lacked the authority to take land into trust for the Mashpee Wampanoag Tribe.

Conner Swanson, a spokesperson for the Department of Interior, said that the tribe did not petition for a panel rehearing of the appeals court’s decision and the court issued its mandate on March 19.

The court mandate “requires the Interior to rescind its earlier decision,” Mr. Swanson said in reference to the 2015 Obama Administration decision to grant the land-in-trust.

“This decision does not affect the federal recognition status of the Tribe, only Interior’s statutory authority to accept the land in trust,” Mr. Swanson said.

The suit against the tribe, brought by residents of Taunton, argued that the Obama Administration erred when determining that the Mashpee Wampanoag qualified as “Indian” under the second definition of the Indian Reservation Act of 1934.

The Trump Administration in 2018 determined that the tribe also does not meet the first definition of “Indian” under the IRA.

The tribe has argued in litigation pending in federal court in Washington, DC, that the Trump Administration’s 2018 decision is “arbitrary, capricious, and contrary to law.”

“The Secretary is under no court order to take our land out of trust,” Mr. Cromwell said in Friday’s statement. “He is fully aware that litigation to uphold our status as a tribe eligible for the benefits of the Indian Reorganization Act is ongoing.”

“Not since the termination era of the mid-twentieth century has a Secretary taken action to disestablish a reservation,” Mr. Cromwell continued. “We will not rest until we are treated equally with other federally recognized tribes and the status of our reservation is confirmed.”

A bill that would affirm the tribe’s land in trust passed the US House of Representatives 275 to 146 in May of last year. President Donald J. Trump tweeted his opposition to the bill, calling it a “a special interest casino Bill, backed by Elizabeth (Pocahontas) Warren” before it passed.

A version of the bill has yet to be brought to the floor in the US Senate.