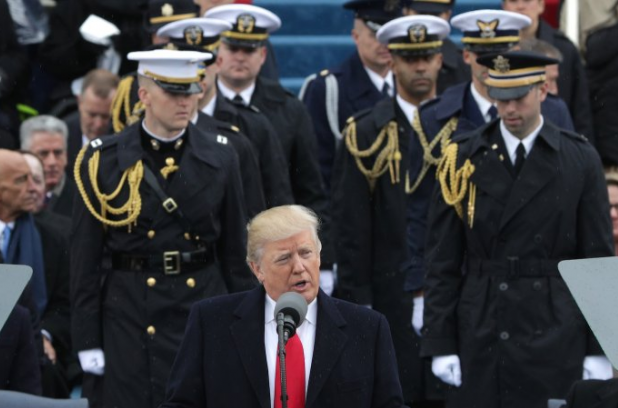 Trump Appeals To Military & Against Press And Courts

Above Photo: From pbs.twimg.com

In an extraordinary appearance Monday at MacDill Air Force Base in Tampa, Florida, President Donald Trump dispensed with democratic protocol to deliver a political speech. He denounced the press and implicitly suggested the formation of a presidential-military alliance against the courts and the Constitution.

In his brief remarks, Trump lavished praise on the Central Command and Special Forces Command troops that are based at MacDill. He began by thanking the military for its lopsided vote in his favor in last November’s election. “And I saw those numbers—and you like me and I like you,” he said.

He continued: “And we’re going to be loading [MacDill] up with beautiful new planes and beautiful new equipment… We’re going to load you up.” He returned to this theme several times, stating at one point, “We will make a historic financial investment in the Armed Forces of the United States…”

Invoking the specter of “radical Islamic terrorists,” he darkly accused the press of deliberately downplaying the threat. “It’s gotten to the point where it’s not even being reported and, in many cases, the very, very dishonest press doesn’t want to report it. They have their reasons and you understand that.”

Following this suggestion that the press is aiding and abetting the terrorists, Trump promoted his anti-immigrant measures, without referring to them directly, and implicitly criticized the courts for temporarily blocking his anti-Muslim travel ban.

“We will defeat radical Islamic terrorism, and we will not allow it to take root in our country… You’ve been seeing what’s been going on over the last few days. We need strong programs so that people that love us and want to love our country and will end up loving our country are allowed in—not people that want to destroy us and destroy our country.”

The speech followed his tweets denouncing the judge who ruled against his travel ban and blaming any future terror attack on the “court system.” His top political aide, the fascist Stephen Bannon, has meanwhile told the press to “shut up.”

Trump’s speech comes in the midst of an intense conflict within the state over foreign policy and national security questions, involving not only the travel ban but also new attacks by the Democrats and much of the media for his supposed “softness” toward Russia.

It also takes place in the context of ongoing demonstrations across the country and internationally in opposition to his racist immigration measures and other antidemocratic policies.

The MacDill event marks a milestone in the long-term strengthening of the role of the armed forces in US political life and erosion of the constitutional principle of civilian control. Trump has packed his administration with retired generals, including James “Mad Dog” Mattis as secretary of defense, Michael Flynn as national security adviser, and John Kelly as head of the Homeland Security Department. The latter appointment for the first time places a military man at the head of a sprawling apparatus for domestic repression established as the internal component of the “war on terror.”

These developments follow the sinister incident, which remains unexplained and virtually unreported by the media, that occurred toward the beginning of Trump’s inaugural address. Ten officers from the various services lined up behind Trump and remained there long enough for the image of the new president flanked by uniformed military men to be broadcast across the country and internationally. This was no accident, but rather a calculated maneuver devised by Trump and advisers such as Bannon to present an image of a quasi-military government, prepared to crack down on opposition at home and wage war against multiple enemies abroad.

The immense growth in the size, power and political influence of the military is not something new or unique to the Trump administration. Rather, as with every other manifestation of the decay of American democracy, with the Trump presidency a protracted process of decline has reached a qualitatively new stage.

Twenty-five years of unending war following the dissolution of the Soviet Union have vastly increased the power of the military brass. The consolidation of a professional military has increasingly isolated the armed forces from civilian society, creating a distinct social caste that asserts its independent interests in the affairs of state ever more aggressively.

The greater the level of social inequality, the more widespread the alienation of the working masses from the entire political system, the more the ruling financial oligarchy seeks to base itself on the military. Already in the 2000 election, in which the Supreme Court handed the White House to George W. Bush, the loser of the popular vote, by shutting down a vote recount in Florida, Democrat Al Gore agreed to Republican demands that illegal military votes in Florida, mainly for Bush, be counted.

Both Bush and Barack Obama set records for the number of speeches they gave to military audiences. With Trump’s chauvinist “America First” government of generals and billionaires, the semi-criminal financial oligarchy bares its teeth and removes the mask of democratic niceties.

In the press and among the think tank strategists of the ruling class, the demise of the bedrock constitutional principle of civilian control of the military is being openly discussed and debated.

The headlines of articles on the subject that have appeared since Trump’s election include: “Is Civilian Control of the Military in Jeopardy?” (The American Conservative), “The ‘Civilian Control of the Military’ Fallacy” (Defense One), and “Trump is surrounding himself with generals. That’s dangerous” (Washington Post). An article published by Foreign Policy in December by Georgetown University Professor Rosa Brooks argues that civilian control of the military has “become a rule of aesthetics, not ethics, and its invocation is a soothing ritual that makes us feel better without accomplishing anything of value.”

The Democratic Party will not oppose the further politicization of the military and militarization of politics. On the contrary, in recent days media outlets aligned with the Democrats have presented the military brass as a democratic check on Trump’s fascistic impulses. The New York Times responded to Trump’s elevation of Bannon to the National Security Council and demotion of the director of national intelligence and chairman of the Joint Chiefs of Staff by urging Trump to seek advice in matters of war and peace from “more thoughtful experienced hands” such as Defense Secretary Mattis and Joint Chiefs Chairman General Dunford.

The Atlantic magazine published an article with the headline “Are Trump’s Generals Mounting a Defense of Democratic Institutions?”

There is no faction of the ruling class or its political representatives, Democratic or Republican, that will defend democratic rights. The collapse of American democracy, as with democratic institutions all over the world, is the outcome of the mortal crisis of American and world capitalism. It is up to the working class to take the lead in the defense of basic rights through an independent struggle for political power and socialism.