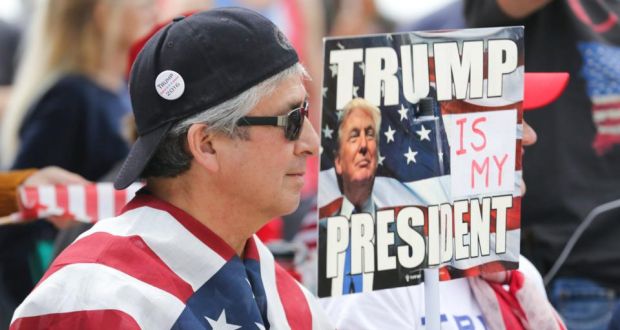 Trump Betrays His Non-Interventionist Base

NOTE: We are posting this article to show that President Trump is making a big political mistake by betraying the people who voted for him, as past presidents have done, to serve the weapons makers and Wall Street. We do not agree with the author’s views on the treatment of refugees.  -MF and KZ

Never betray your friends to court the favor of your enemies. If you betray your friends, the most principled and perceptive among them will drop you, leaving only the delusional and venal. That is not a good trade, given that the approval you gain is bound to be fleeting and contingent, whereas the contempt and distrust you create will be permanent. The people you betrayed may come back to you out of sentimentality or self-interest, but their trust and respect will never return. They will always regard you as a traitor.

Why is such a simple lesson so hard for politicians to understand?

Donald Trump’s dizzying about-face on Syria has won the temporary applause of his enemies, but he has forever lost the respect of his most ardent supporters on the Alt Right, the people who actually believe in and defend his nationalist-populist message, including his America First foreign policy.

I thought Trump’s willingness to fight a two-front war against the Democrats and his own party was sufficient proof that he was sincere about his America First foreign policy. But he ditched it at its first real test.

I no longer trust Donald Trump.

But it is worse than that. I no longer like or respect Trump either. Trump didn’t just betray us. He betrayed us over something utterly stupid. We’ve seen this all before. We’ve seen pictures of dead or injured Syrian children on CNN (although not the victims of US-backed forces). We’ve heard stories of Assad “gassing his own people.” We’ve seen the same vulgar emotional manipulation and ginned-up storms of social signaling. We’ve been asked to start wars based on what some little Syrian Anne Frank allegedly says on Twitter. We know that the press, politicians, and intelligence agencies behind this are trying to topple Assad. We know that they are liars, because they are the same people who lied to get us into the Iraq War. And Trump has seen it all too. He knew better. We know he knew better, because of a long history of Tweets about Syria, which now make him look like a feckless hypocrite. So for him to fall for the warmongers this time frankly makes me question his intelligence, his character, even his sanity.

Beyond that, attacking Assad exacerbates our problems. We want Assad to win this war. We want him to destroy ISIS and other Islamist terrorist groups. We want peace and stability in Syria, so we can send millions of refugees back home, whether they want to go or not. And we certainly do not want heightened tensions with Russia.

Furthermore, Trump’s intervention in Syria is now being used as an argument to admit more Syrian refugees.

Then, there’s the little problem that Trump’s strike was unconstitutional. Wouldn’t it be poetic if Trump gave the establishment the Syrian war they have been trying to start for years — as well as grounds for impeaching him before he manages to slip up and do something good for America?

Finally, why are we even debating retaliations for atrocities committed by Syrians in Syria? Obviously, because no matter what side you come down on, Jews and Israel benefit. They benefit when we actually promote chaos and regime change in Syria. And they benefit even if we end up doing nothing, simply because we not debating, say, retaliating for atrocities committed against whites by Muslims all over Europe, or against whites by blacks in South Africa, or against whites by mestizo invaders in America. Let’s debate regime change in South Africa or Germany or Sweden or Mexico, shall we?

Or better yet, why not focus on America First? Trump has his work cut out for him effecting regime change in Washington, DC.

Some have suggested that Trump changed his Syrian policy out of Machiavellian calculations:

We are also told that the ineffectual nature of the strike was actually part of the plan. The Syrians and Russians were forewarned, expensive equipment was removed, etc. Missiles were allegedly deactivated in flight. (Certainly more comforting than believing that Russian technology shot a lot of them down.) Trump does not want to actually harm Assad. There was no risk of escalation with Russia or Iran. Trump just wants to do one or all of the above.

Frankly, I’m not buying it. None of these theories are half as clever as purported.

The most plausible explanation for the Syria pivot comes from Seventh Son at The Daily Shoah (Episode #145). When Trump was asked about the gas attack by a reporter at the news conference with King Abdullah of Jordan, he saw it as an opportunity for abusing Obama as a weak little girl for declaring a red line in Syria and then backing down when Assad crossed it rather than acting decisively. When asked if this attack crossed any red lines for him, Trump of course had to agree and amplify, lest he too be a weak little girl like Obama.

In short, Trump painted himself into a corner with his big mouth, his adolescent Alpha posturing, and his fixation on denigrating Obama, and since acknowledging mistakes has never been Trump’s strong suit, it was child’s play for the establishment to spring into action and funnel him into launching airstrikes. The politicians, pundits, and masses are well-programmed with Jewish talking points. All they needed was an opening, then all the tools started whirring for war.

Let’s hope that Trump has realized his mistake and decides to declare victory and turn back to real priorities. Let’s hope that the other players in this game, like Syria, Russia, and Iran let him.

I think Seventh Son’s analysis is correct, and it helps us decode Trump’s whole foreign policy. For a long time, we on the Alt Right were scratching our heads about the great anomaly in Trump’s America First platform, namely Iran. Trump constantly repeated the rankest, most gefilte-fishy neocon talking points on Obama’s Iran deal, which threatened to cause a terrifying outbreak of peace in the region. My hypothesis was that Trump took this stance simply to contradict and abuse Obama.

But, goyische kopf that I am, I assumed that the rest of Trump’s foreign policy — the stuff I agreed with, of course — was sincere. Now I am not so sure. Is Trump’s entire foreign policy agenda simply based on negating Obama’s? What about his domestic policy agenda? Does Trump base his policies not on a sober assessment of what is good for America, but simply on some sort of egomaniacal desire to one-up and put down Barack Obama and his ilk? Granted, doing the opposite of Obama and Hillary is generally a good guide to policy. But you’d have to be an overgrown adolescent chimpanzee to run a country that way. Could this be why Donald Trump is idolized by rappers?

If this is the Trump code, you can bet I am not the first one to crack it. Which means that the establishment now knows how to play Trump. History is one long record of the triumph of the cunning over the macho. Which means that all bets are off for the MAGA agenda. Sure, we might still get some of what he promised, but now a new enemy has emerged from the shadows, perhaps the most formidable one yet: no, not the “Deep State,” but Donald Trump’s own adolescent egomania. (Yes, I know cat ladies have been saying this for years, but they say that about anyone with a scrotum, so they are not to be taken seriously.)

For the Alt Right, it’s Mourning in America. We believed in this guy. We liked this guy. And now he just seems stupid. Frankly, so do we. The day Trump launched his strike, I received the proof copy of my new book In Defense of Prejudice, and I cringed my way through the chapters on Trump. Sure, I can tell myself that it was still right to support him, that Trump is still better than Hillary. So why is he enacting Hillary’s foreign policy? Maybe Martin Heidegger really was the last philosopher with sound political judgment.

I’m a little suspicious at how quickly we on the Alt Right moved to condemn Trump. As soon as I heard that missiles had been fired, my feelings changed completely. The cloud of confusion and anxiety that was building over the previous days suddenly erupted in lightning and thunder. It was a catharsis.

But in truth this break has been a long time in coming. I think that we all felt that Trump was faltering out of the gate, especially with the health care bill. And when people feel that a relationship is doomed, it is quite common to search for a principled pretext to give it a coup de grâce and move forward. It is psychologically easier that way. One maintains one’s sense of agency, which is an important component of one’s self-worth. In short, it is just another case of what I call honorable defeatism. In this case, however, it is a good thing, for two reasons.

First, a lot of us were too emotionally invested in Trump. I thought I had a pretty realistic view of Trump, but this betrayal still came as a brutal blow. It must be a lot worse for the souls who actually thought the Alt Right was responsible for putting Trump into office, who felt that we owned a piece of him. The Alt Right’s relationship with Trump was always a one-way man crush, based largely on projections. Ending such a relationship is a healthy thing.

Second, it helps us refocus on our mission. When Trump was elected, I argued that the Alt Right needs to see itself as Trump’s loyal opposition, the opposition that wants him to succeed in spite of himself. After all, Trump is not one of us. He’s a populist and a civic nationalist with generally good instincts. But he’s not terribly articulate or intellectual, which is one reason he seems to have been so easily misled by the Jews and cuckservatives that opportunistically crowded into his administration. It is our job to offer an intellectually sound and emotionally compelling case for nationalist populism, to help Trump advance his policies, and to help as many Trump supporters as possible advance beyond them to White Nationalism.

Now that the God Emperor has fallen to earth, we need to remind ourselves that Trump was never the end game. He was — and remains — an immense opportunity to smash the current globalist establishment and unleash nationalist, populist, and racialist forces that will be raging into the future, long after Trump is dead. It is our movement, not Trump, that represents the real long-term interests of our race, and we have to start acting like it.