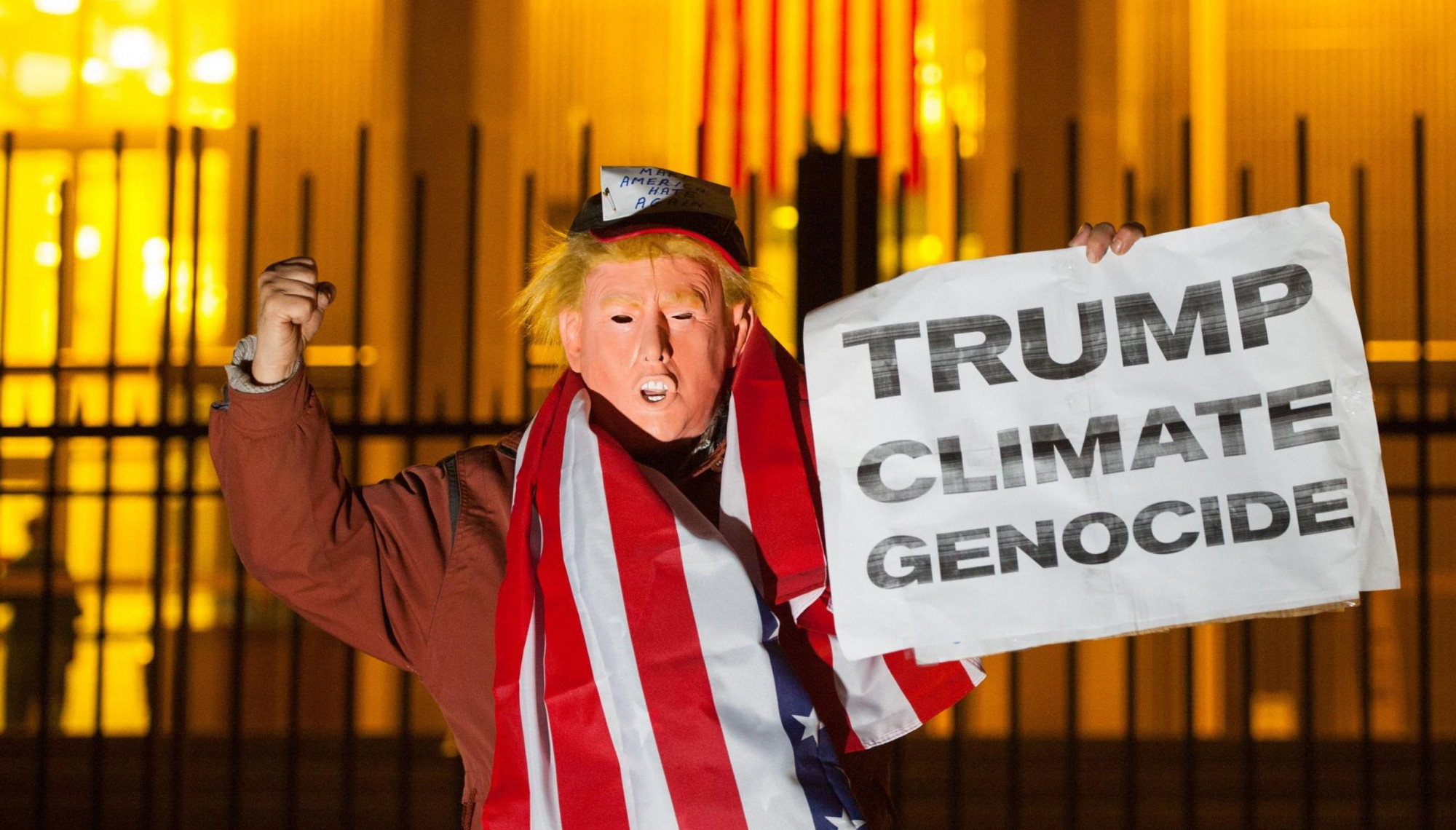 Above photo: Demonstration outside the US embassy, London, November 2016.

On November 8th last year Donald Trump was elected President of the USA.

He was elected on a program to expand the use of fossil fuels, especially coal, and to withdraw from the Paris Climate Agreement – the only international agreement to limit climate-destabilising greenhouse gases that we have – a pledge that he has since turned into reality.

The imminent threat of the catastrophic destabilisation of global climate is the defining reality of out time. It puts literally billions of lives at risk, well within this century. Yet the world is set on a trajectory towards global catastrophe meaning that failure to change course will result in a humanitarian tragedy of unthinkable scale. The scientific evidence is overwhelming and there is now no excuse not to be aware of this reality. All world leaders have an overriding responsibility to cooperate in the urgent action required to save the billions of lives and livelihoods now under threat.

There are many who have not risen to this responsibility and many obstacles in the way of the urgent globally coordinated action that we need. The Paris Agreement itself is woefully inadequate as it now stands. Yet Donald Trump, now the leader of the most powerful country on earth, stands out as most unequivocally opposed to action of any kind: the foremost climate criminal of our time. Failure to recognise the criminal atrocity of his actions and policies is a failure to recognise the profound gravity of the crisis we face.

We appreciate and support the efforts of many US states and cities to adhere to the Paris Agreement in defiance of Trump but we want to remind everyone that this is no substitute for the wholehearted commitment of the US Federal government to the global effort to avert climate catastrophe. Likewise, we applaud the commitment of those in other countries to pursue the Paris Agreement, whatever the United States as the greatest power on earth, decides to do – but again, we would issue a reminder that the Paris Agreement is only meaningful as a step towards a much greater effort, as part of the building momentum towards a radically accelerated global program to reduce heat-trapping emissions.

The anniversary of Trump’s election falls on the third day of the United Nations Climate Talks, when the nations of the world will struggle to build on the momentum of the Paris Climate agreement, a task effectively rendered all but impossible by the wilful obstruction of the world’s greatest power.

We will take the message TRUMP CLIMATE GENOCIDE to the Climate Talks (COP 23) in Bonn, Germany. We are urging global citizens all around the world to promote the same message on this

– wherever they are, in whatever way they can. The message – that Trump is is effectively commiting ‘climate genocide’ – is critical, we think. So we are recommending that the message for this day includes these words: ‘Trump’ and ‘Climate Genocide’. If this specific message appears in enough places aound the world on this day, then maybe it will get noticed and begin to sink in. Trump’s election can be seen as bad in a multitude of ways but its true, direst and most fateful significance is to be seen in the way it threatens to fatally undermine the world’s faltering efforts to avert a global climate holocaust.