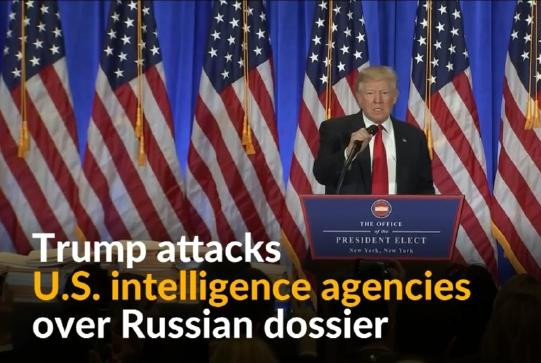 Trump Dossier Should Be Treated Skeptically But Taken Seriously

Some in media are treating the report on Donald Trump’s ties to Russia published by BuzzFeed (1/10/17) as though it were an intelligence report—as in the Washington Post‘s headline, “Trump Says ‘Sick People’ Invented Russia Intelligence Report” (1/11/17).

It’s not an intelligence report, or a government report of any kind. No official agency had a hand in creating it; indications are it was leaked to media by the same private group that commissioned it. Putting it in the “intelligence” category makes it harder to think about how media outlets should deal with it, bringing in questions of journalism’s relationship to the state. Really, despite its anonymous author reportedly having a background in British intelligence, it’s closer to being itself a strange sort of journalism: It’s an investigator’s account of what information they say they learned by talking to people—not unlike a news article.

Of course, if it’s a news report, it’s from an utterly obscure outlet that’s known to have partisan funders (opponents of Trump in both the Republican and Democratic parties). That’s not generally a recipe for trustworthy journalism; in fact, it describes a lot of the outlets that get labeled as “fake news.” So it’s not too perplexing why the document, though circulating widely in official and journalistic circles, got next to no coverage prior to the election (a Mother Jones story published on Halloween being a notable exception).

But as the document circulated behind the scenes, a funny thing happened: People in governmental positions seemed to be taking it seriously. Senators Harry Reid (D.–Nevada) and John McCain (R.–Ariz.) both pushed the FBI to investigate the report’s charges of collusion between the Trump campaign and Russian intelligence—Reid before Trump’s election, McCain afterwards. In October 2016, the FBI obtained a warrant from the secret FISA court authorizing an investigation into charges contained in the report. And in January 2017, Trump, President Obama and congressional leaders were given a summary of the report’s charges, which Director of National Intelligence James Clapper said was done in order to “ensure that policymakers are provided with the fullest possible picture of any matters that might affect national security.”

Given that the report’s allegations were driving criminal investigations, affecting inter- and intra-party battles and were claimed to have the potential to “affect national security,” it’s hard to argue that the public was better off left in the dark until the powers that be get to the bottom of it. “It’s better not to know” is rarely the answer to journalistic quandaries.

With the report now in the public domain, reporters at actual news outlets have been able to push the story further. The BBC‘s Paul Wood (1/12/17), notably, reported that the Kremlin’s gathering of blackmail material on Trump was also alleged by CIA sources, who conveyed that

The report’s publication also gives the Trump’s spokespeople an opportunity to debunk the claims, as they tried to do at the president-elect’s press conference. Press secretary Sean Spicer said that, contrary to the report’s claims, Trump lawyer Michael Cohen has never been to Prague, and that Cohen’s passport confirms this. Less compelling was Spicer’s assertion that Carter Page, named in the report as a go-between, “is an individual who the president-elect does not know”—given that when Trump was asked by the Washington Post (3/21/16) to name his foreign policy team, Page was the second of five names Trump offered.

FAIR (6/16/16, 8/1/16, 12/15/16, 1/11/17) has repeatedly been critical of the rush to judgment on allegations that Russia was behind the release of Democratic National Committee emails, and the willingness to rely on intelligence agency assertions advanced with scant evidence. But there is also a danger in assuming in advance that such stories are not true, and that indications that the FBI and CIA are taking the allegations of collusion with Russia seriously are merely a facade for (as The Intercept‘s Glenn Greenwald put it) “an attempt by the Deep State to sabotage an elected official who had defied it.”

There is in fact a record of political campaigns—as it happens, Republican campaigns—making deals with foreign governments to manipulate domestic politics. Just recently, notes from Richard Nixon aide HR Haldeman surfaced (New York Times, 12/31/16) that corroborated the story—which already had plentiful evidence—that the 1968 Nixon campaign conspired to sabotage Vietnamese peace talks to preserve the war as a campaign issue. This illegal intervention likely cost Hubert Humphrey the election, and may have stretched the war out for another six years, at a cost of a million or more human lives.

Later, the 1980 Reagan campaign had a covert program to undercut negotiations to retrieve the US hostages in Iran, which may have included secret negotiations with Tehran (Extra!, 3/13)—the infamous “October Surprise.” If this interference was decisive in scuttling the talks, it probably gave us the Reagan administration—the enduring effects of which can be seen on any  chart of rising economic inequality.

These kinds of conspiracies do exist, and they can have real impact, with a vast cost in blood. If there was one in 2016, we need to know about it now—not in 2064. Conspiracies, by their nature, are hard to prove; if we wait for irrefutable proof before we begin investigating them, they will likely never be uncovered.

It’s also worth considering why the tale of Trump “defiling” a bed that Obama had slept in had the air of, if not credibility, at least truthiness: It fit with what we know about the essential vindictiveness of Trump’s personality. This is the guy, after all, who hired an operative who was fired over Bridgegate to be his political director: He believes in getting back at people. David Corn (Mother Jones, 10/19/16) wrote a rather chilling article detailing the many times Trump has declared vengeance to be one of his essential principles—e.g., “When you’re in business, you get even with people that screw you. And you screw them 15 times harder. And the reason is…not only, because of the person that you’re after, but other people watch what’s happening.”

The thing is, the people at the CIA, the people at the FBI—they know that Trump is like this. They know he is highly likely to go after individuals he sees as having impugned and embarrassed him, not only attempting to end their careers, but also using the vastly increased powers of the post-9/11 presidency to ruin their lives. Surely they didn’t expect that revelations like these would “bring him down.” Yet they chose to investigate these charges anyway, chose to get them into the intelligence briefings. Maybe, just maybe, they did so because they actually believed these were “matters that might affect national security.”

Given Republican control of both houses of Congress and the GOP-engineered conservative majority that will continue to dominate the Supreme Court, there’s very little that can be done to thwart Trump politically before the 2018 midterm elections. If his agenda is going to be effectively resisted, much of that resistance will have to come from within the bureaucracies that will be tasked to carry it out. That includes the intelligence bureaucracies, whose choice to follow or reject orders under Trump may have the most horrific consequences of all.

When those people stand up to Trump, as I hope they will, will they get the commendation and support that whistleblowers like Chelsea Manning and Edward Snowden received from genuine progressives during the Obama era? Or will they be treated as agents of the “Deep State,” trying to “unilaterally subvert the US election and impose its own policy dictates on the elected president”?

I hope it’s not the latter, because President Trump—who very soon will have his own kill list, the power of indefinite detention, perhaps a resurrected torture program—is likely to take words like that all too literally.

Jim Naureckas is the editor of FAIR.org. You can find him on Twitter at @JNaureckas.