Above Photo: Protesters hold signs during a protest against the election of President-elect Donald Trump, Wednesday, Nov. 9, 2016, in downtown Seattle.

Note: Protests against Donald Trump began during his campaign for the presidency, escalated with his election and now are set to rise to a new level with his inauguration. We urge and foresee a presidency of protest with points of extreme escalation as he pursues regressive policies that adversely impact most people in the United States. We have been urging #NoHoneymoon protests no matter who was elected that lead into an ongoing presidency of protest – now we see it happening.

The article below highlights the developments around the inauguration but also begins to show the key conflict we must face — longer-term protesters from Occupy, Black Lives Matter and on other issues during the Obama era have a different understanding than many of those who are joining protests to oppose Donald Trump. We welcome the expansion of the resistance movement and expect it to grow as Trump shows his economic policies will not bring economic security to the people of the United States. As the movement grows, we need to confront the key conflict: ping pong politics will not solve the democracy crisis. Going back and forth between Democrats and Republicans will continue policies that favor the extreme wealthy over the rest of us.

A key reason why Donald Trump was elected was because the Democrats have been putting in place policies that make the wealthy even wealthier, while the rest of the country stagnates or gets poorer and more insecure. The Democrats neoliberal policies of privatization, commodification and profit before people and planet fertilized the ground for Donald Trump. When we play political ping pong, the .1 percent always win. The popular movement must be clear — we know these two Wall Street funded parties will not serve the people. To transform the country we must end the dictatorship of the duopoly.  KZ

Organizers of inauguration protests speak to MintPress News about Jan. 20 and the prospects for mobilization under the Trump administration.

NEW YORK — Thousands of protesters who have mobilized nationally since the election of Donald Trump are planning a massive convergence in Washington against the presidential inauguration on Jan. 20.

“We believe that we are entering a new period of mass mobilization in the United States,” Walter Smolarek, a spokesperson for the ANSWER Coalition, told MintPress News.

ANSWER, which organized a number of major anti-war protests since its founding 15 years ago, is one of many groups mobilizing against the inauguration.

“In some cities, attendance at mass meetings focused on mobilizing for the inauguration protest has been in the hundreds,” Smolarek said.

Other groups planning inauguration protests range from anarchist collectives to networks of immigrants and women.

Online organizers, including some associated with Occupy Wall Street, have also floated proposals for a nationwide general strike.

‘A shift in awareness, concern and fear’ 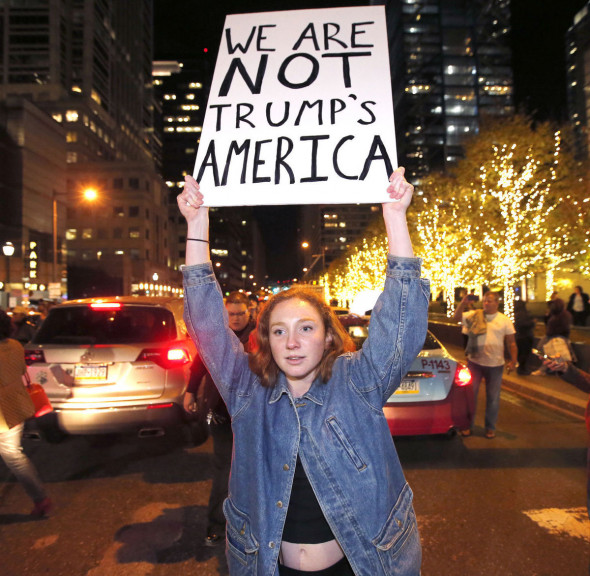 A protesters unhappy with the presidential election blocks traffic on JFK Blvd. as they march between cars on Thursday, Nov. 10, 2016, in Philadelphia. (Charles Fox/The Philadelphia Inquirer via AP)

Organizers and observers expect events to swell with the thousands of demonstrators drawn into the streets since Nov. 8.

After the election, a weekly meeting of one protest group in New York City, the People’s Power Assemblies, grew to over 200 participants.

While the meeting’s one to two dozen regular participants normally fit comfortably around a conference table, newcomers the week after the election spilled out of a Midtown office, with some standing in a hallway to hear the discussion inside.

Many spoke of their participation in the protests that have taken place almost daily since the election, some of them for the first time.

“They indicate the possibility of a larger, more radical movement, aligned with more left policies.” 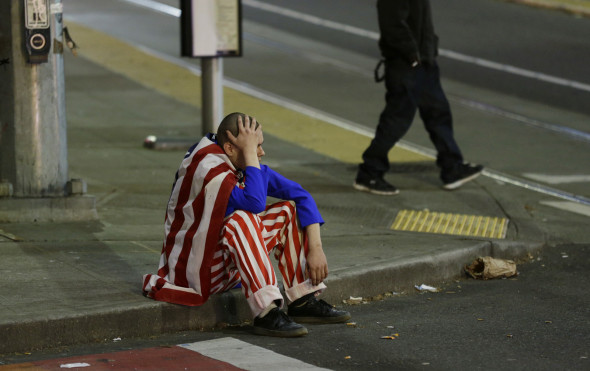 As new waves of protesters have joined gatherings across the country, their different perspectives have come into sharp contrast.

The night after the election, tension erupted at a demonstration outside Manhattan’s Trump Tower, as some participants chanted slogans against the New York Police Department while others tried to discourage them.

Stark differences between disgruntled Hillary Clinton supporters and more radical Trump opponents persisted at demonstrations over the following weeks, and may even continue through the inauguration protests.

“The protests have marginalized long-time activists and people of color,” Ashley said.

“These protesters speak a language of peace and love, often not realizing that they are telling the most oppressed that they should love their oppressors.”

Others find cause for hope in the uneasy mix of ideas.

“Many people are newly entering the movement and engaging in protest for the first time,” Smolarek said.

“The more people stay engaged in the struggle and are welcomed and mentored by long-time activists, the more exposure they will have to radical ideas.”

And in the aftermath of stinging losses at every level, attempts by Democrats to steer reactions may produce few results.

“There is an effort by Clinton supporters and the Democratic Party machine to keep the message safe,” Sara Flounders, co-coordinator of the International Action Center, which plans to protest on Jan. 20, told MintPress.

“But people who believed in the current electoral system just days ago are changing. They feel betrayed.” 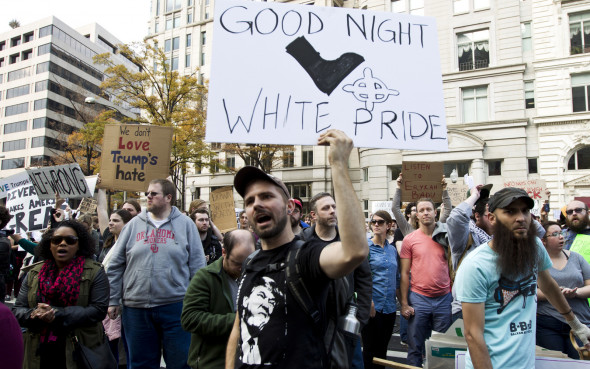 A demonstrator holds a banner as they protest in Pennsylvania Avenue outside of the Trump Hotel in Washington in opposition of President-elect Donald Trump, on Saturday, Nov. 19, 2016. ( AP Photo/Jose Luis Magana)

Organizers agree that the massive outpouring of post-election opposition, the scale of which is unprecedented in U.S. history, bodes well for both protests on Jan. 20 and the prospects for grassroots mobilization during the Trump administration.

The gatherings have dwarfed much smaller protests against the contested election of George W. Bush in 2000, while Barack Obama’s victory in 2008 saw little public opposition.

“These actions are overwhelmingly composed of young people who are completely fed up with the injustice and bigotry that Trump represents,” Smolarek said.

“Many have been organized spontaneously on very short notice. We consider this a very positive sign.”

“People who have never been in the streets before suddenly feel compelled to act,” Flounders said.

“They hated both choices. The election campaign exposed the corruption and decay of all political institutions in the U.S.”

The inauguration is only the beginning of what promises to be a tumultuous administration.

“We have tentatively started to plan a nationwide 100 days of action that would start with ‘J20,’” Ashley said.

“Pressure from people’s movements must be kept alive and continue to grow in an effort to produce real, systemic and lasting change.” 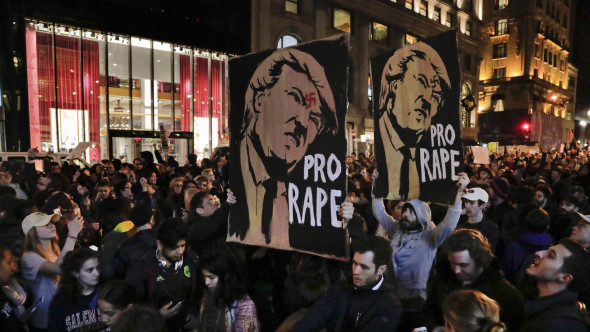 The scale of resistance under Trump may depend on his actions in office, whether they continue the bellicose, often offensive rhetoric of his campaign or settle into a more predictable presidential routine.

But his initial steps toward a transition into the Oval Office — particularly his unexpected appointments to key roles — indicate that his administration may prove less conventional than many had anticipated.

“As the Trump administration begins to take shape, it is becoming more and more clear that he has no intention of ‘draining the swamp’ and will fail to live up to the hopes of those who supported him under the impression that he was the ‘change candidate,’” Smolarek said.

The election itself, an unusually toxic one that left most voters without a nominee they felt they could actually support, may render the prospects of demobilization unlikely.

“There has been a radical shift in the thinking of millions of people and a shift in what they are willing to do,” Flounders said.

“There is motion that can not be channeled into the corrupt electoral system.”