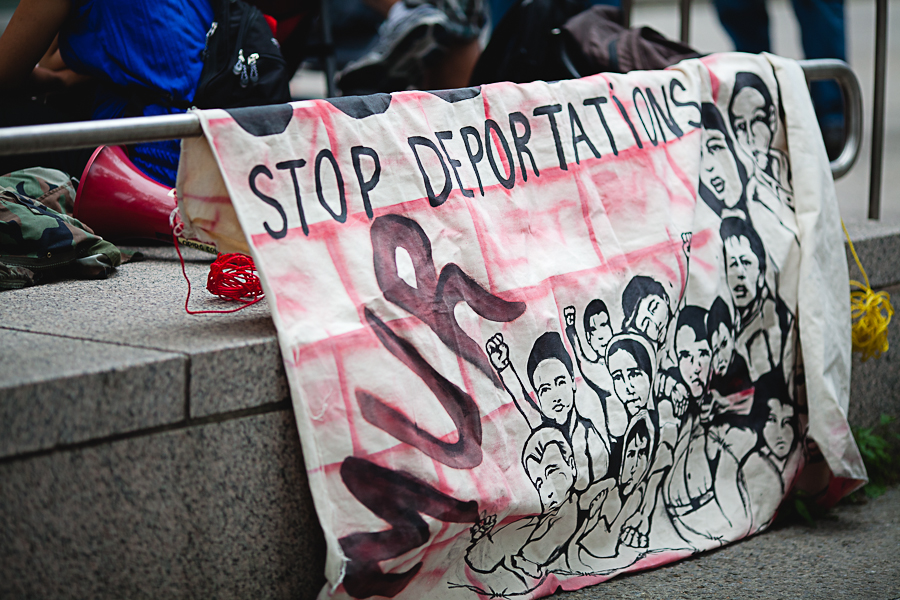 Note: Advocates for immigrant rights should not consider President Trump’s executive order on detaining immigrant children to be a victory. Now the Trump administration will lock up entire families. This is still an immoral violation of the human rights of immigrants.

The Trump executive order returns the United States to the abusive policies of the Obama era who also incarcerated entire families. There were outcries of protests then and litigation resulted in an agreement to stop the indefinite detention of immigrant families.

Sarah Lazare writes about the incarceration of immigrant families in In These Times describing the reaction to the same policy in the Obama era, writing

“In August 2016, 22 mothers incarcerated in ‘Berks Family Residential Center’ with their children wrote a letter to Jeh Johnson—then Secretary of DHS—stating, ‘Our children, who range in age from 2 to 16, have been deprived of a normal life. We are already traumatized from our countries of origin. We risked our own lives and those of our children so we could arrive on safe ground.’

“‘While here our children have considered committing suicide, made desperate from confinement,’ they continued. ‘The teenagers say that being here, life makes no sense. One of our children said he wanted to break the window to jump out and end this nightmare.’”

Immigration laws in the United States do not work and the Congress is too dysfunctional to fix them. Immigrants are scapegoats for a failed economic policy that leaves most people in the United States economically insecure. Among the policies that undermine the economy are corporate trade agreements that serve transnational corporations not the people or planet, the hollowing out of the US industrial base and lack of investment in fundamental necessities for the economy, e.g. infrastructure, education. The mis-investment of tax dollars with more than half of US discretionary spending going to the military hollows out the base of the US economy. US foreign policy that results in militarism and regime change putting in place dictatorial regimes that do not serve their people results in people needing to escape to safer countries These fundamental errors have created a failed economic policy that creates widespread economic insecurity that will not be corrected by incarcerating immigrant families or by a trade war.  KZ

Jailing families is not a solution

WASHINGTON — President Trump has signed an executive order mandating that families be jailed by the U.S. Departments of Homeland Security or Defense. This order will likely have the effect of jailing, for months or even years, immigrant families seeking safety in the U.S. The National Immigration Law Center has long decried the practice of jailing immigrant families, filing lawsuits when necessary to defend their rights. Below is a statement from Marielena Hincapié, executive director of the National Immigration Law Center, who visited family detention facilities in 2014:

“The Trump administration has created a crisis and committed horrific human rights abuses by separating children from their parents at the border. Clearly on the defense, today it used a political sleight of hand to try to placate Americans who have been rightly outraged by their government’s repugnant policies, including separating children and babies from their parents and housing them in cages.

“Jailing families is not an acceptable solution to putting children in cages. The best — and safest — place for these children is with their families and in their communities. The Trump administration pretends that alternatives to detention don’t exist. This is false. There are numerous alternatives that are both more humane and less costly, but this president refuses to use them. Our country has a system in place to process asylum claims, and these families should be allowed to go through this legal process.

“The Trump administration may not care much for the basic constitutional rights of people seeking safety. We do, and we’ll work with communities and in courtrooms to protect them. Not a single one of us should be standing on the sidelines as this administration inflicts lifelong trauma on these children. It is up to all of us to hold this administration accountable and stop this nightmare.”