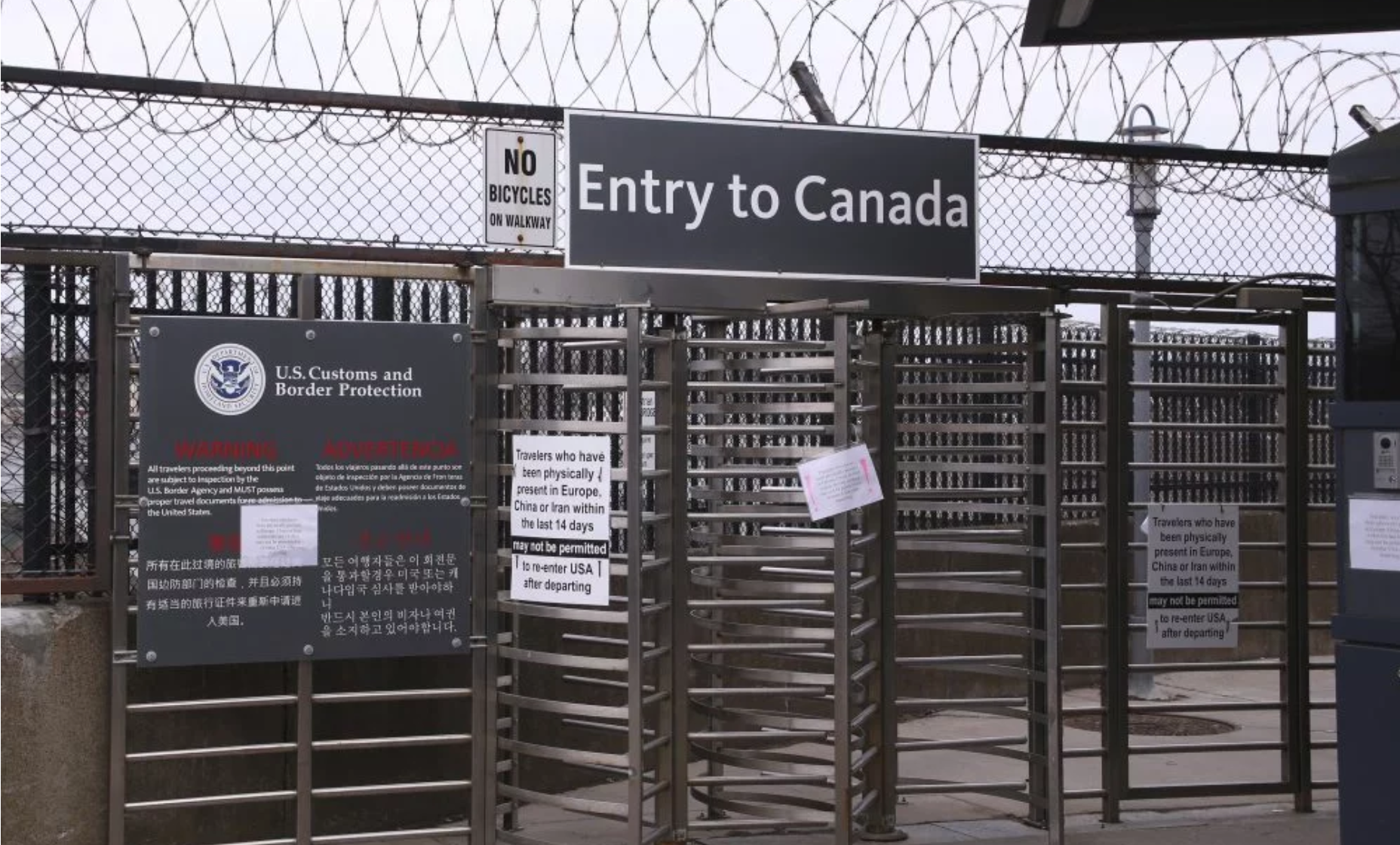 Trump Faces Backlash Over Idea To Militarize The Canadian Border

Above photo: Signs mark the entrance to Canada via the Rainbow Bridge in Niagara Falls N.Y. Jeffrey T. Barnes, AP.

NOTE: The outcry over Trump’s idea to militarize the Canadian border and his backing down expose the structural racism inherent in the US and its border policies. Canada, a predominantly white nation, demonstrated clearly that it does not want to suffer what those living close to our southern border have experienced for decades. Along the southern border, towns and tribes are separated and militarization and violence spread into the communities literally terrorizing them. It’s time for us all to show greater solidarity with our southern neighbor. If it isn’t tolerated for the Canadian border, it shouldn’t be tolerated for the Mexican border either. -MF

Ottawa — After U.S. President Donald Trump’s team floated the idea of placing troops on the Canada-U.S. border, Prime Minister Justin Trudeau says it is in the U.S. and Canada’s interests to keep the border unmilitarized.

He made the comment after recent discussions between Canada and the U.S., in which Trump’s team was floating the idea of putting U.S. troops within 30 kilometres of the shared border.

“Canada and the United States have the longest unmilitarized border in the world, and it is very much in both of our interests for it to remain that way. We have been in discussions with the United States on this,” Trudeau confirmed, speaking from the front steps of Rideau Cottage on Thursday.

He said that Canada has highlighted the benefits of that longstanding border arrangement to both countries and their economies, “and we feel that it needs to remain that way.”

Sources confirmed to CTV News that Trump’s White House is discussing the possibility of beefing up its military presence at the Canada-U.S. border, with the aim of assisting border guards in their attempts to catch irregular crossers.

“Canada is strongly opposed to this U.S. proposal, and we have made that opposition very, very clear to our American counterparts and we will continue to do so,” Freeland said in a press conference on Parliament Hill following Trudeau’s remarks.

“At the end of the day, every country takes its own decisions, but ours is an important valued partnership and we are making very clear Canada’s position.”

However, that was an uptick from 2017, when 504 people were apprehended illegally crossing the border into the U.S. from Canada.

Meanwhile, Canada faces a much higher rate of irregular border crossings from the United States. According to the Immigration and Refugee Board of Canada, from February to December 2017, Canada received 18,059 refugee claims from irregular border crossers. In 2018, that number rose to 20,603.

While the border remains unmilitarized, Canada has tightened regulations to cut down on travel between the two countries. Only essential travel is permitted, such as the transportation of goods or travel for work.

“We will continue to work with the United States to ensure that the border measures we put in place are respected. We have closed the border temporarily to all but… essential travellers,” Trudeau said.

“We will continue to adjust as things unfold, as necessary. But we will be continuing to follow the best advice of the scientific community on doing what is necessary to keep Canadians safe, as a priority.”