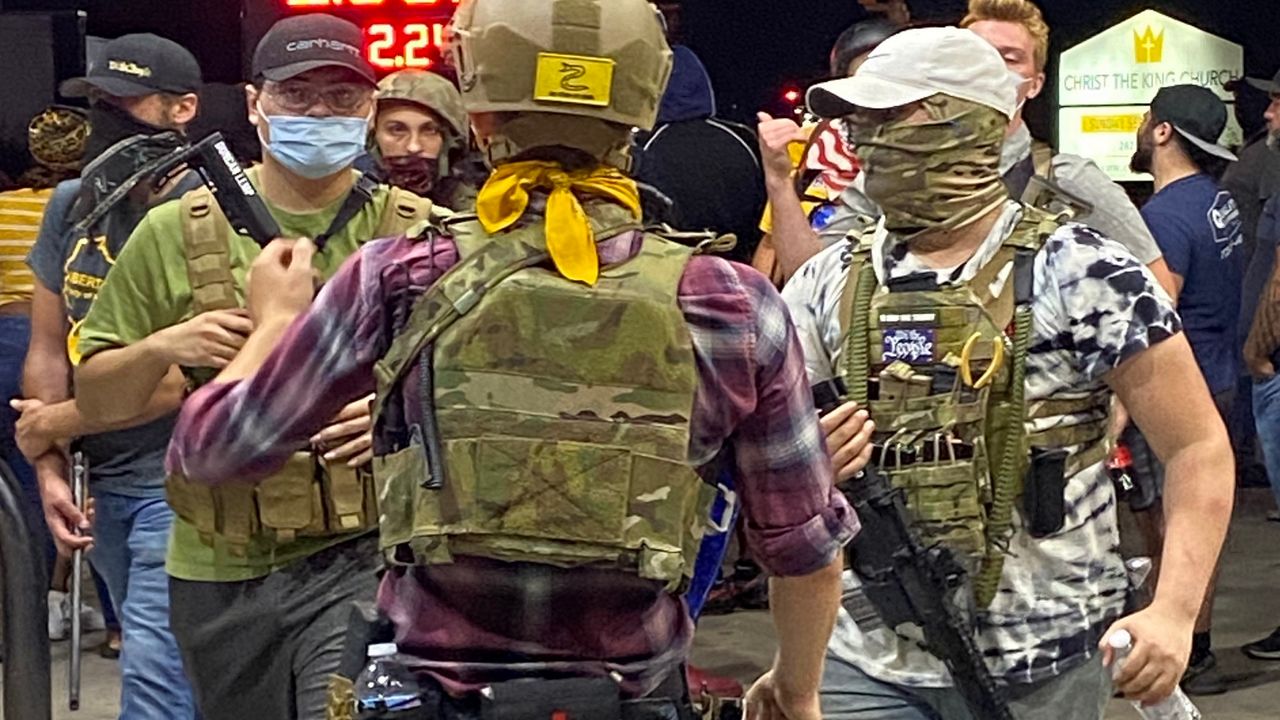 Above photo: A group of armed young men at a gas station in downtown Kenosha, just minutes before a fatal shooting. Spectrum News/Sabra Ayres.

In the week since a fascistic gunman killed two protesters in Kenosha, Wisconsin and seriously wounded a third, the Trump administration and its allies within the media and political establishment have defended the killings and the murderer.

The actions of Kyle Rittenhouse, a 17-year-old Trump supporter who had previously attended Trump rallies, are the direct outcome of the incitement by this administration itself. It occurred during the week of the Republican National Convention, as speaker after speaker railed against the “radical left” and demanded the restoration of “law and order” in response to the protests over the police shooting of Jacob Blake in Kenosha last Sunday.

Over the weekend, when asked to respond to the murders, Trump refused to condemn them. He repeated an earlier statement that they were “under investigation” and that the administration was “looking at it very carefully.” Trump added, however, that it was protesters who were to blame, saying that Wisconsin “should not have to put up with what they have been through,” referring to the protests.

Others in and around the administration have been even more explicit in praising Rittenhouse. Donald Trump Jr., Trump’s eldest son, retweeted a post by right-wing commenter Tim Pool declaring that Rittenhouse “is a good example of why I decided to vote for Trump” and lauding him for deciding “to go up and protect businesses and offer medical support [to] people.”

Last week, Fox News host Tucker Carlson praised Rittenhouse for attempting to “maintain order when no one else would.” Speaking on CNN on Sunday, Republican Senator Ron Johnson of Wisconsin repeatedly refused to condemn Rittenhouse, instead denouncing the “violence” and “economic destruction” in the week since Blake’s shooting.

Developments in Wisconsin have been followed by an escalating campaign by the Trump administration for a military-police crackdown in Portland, Oregon. Right-wing groups—including Patriot Prayer, which has ties with the Portland police—have been patrolling the streets of that city over the past week, firing mace and paintball guns against protesters and journalists.

After a member of Patriot Prayer was shot and killed on Saturday, Trump demanded the deployment of the National Guard in the city and tweeted, “LAW AND ORDER!!!” Referring to the fascistic gangs, Trump wrote that the “big backlash… cannot be unexpected after 95 days of watching and [sic] incompetent Mayor admit that he has no idea what he is doing.”

There is nothing spontaneous about the parade of armed vigilante groups in Kenosha, Portland and other cities. They are no less coordinated with the White House than the armed protests of fascistic groups at state capitol buildings in Michigan, Virginia, Minnesota and other states in April and May to demand an end to restraints aimed at stopping the spread of the coronavirus pandemic.

The strategy of the Trump administration is to wage the next two months of the election campaign under conditions of violence, military-police deployments and the threat of civil war. Its “law-and-order” campaign is being developed even as it is provoking violence and repression.

What is now taking place is an escalation of Trump’s efforts to develop a far-right, fascistic movement based on the police, sections of the military, and paramilitary-type organizations. The latest tirades follow his threat on June 1 to invoke the Insurrection Act to deploy the military against protests, effectively attempting a military coup, and the deployment of federal paramilitary shock troops to seize and beat protesters opposed to police violence in July.

Last week, the Republican National Convention was centered on hysterical denunciations of “socialism,” “Marxism,” “communism” and the “radical left.” In his own fascistic tirade on Thursday night, Trump declared the election a referendum that “will decide whether we save the American dream or whether we allow a socialist agenda to demolish our cherished destiny.”

The coronavirus pandemic has exposed the horrific consequences of the subordination of all social needs to the capitalist oligarchy’s drive for profits. The official death toll is more than 187,000, with projections that it could rise to 300,000 by December.

Tens of millions of people are unemployed and have been cut off from federal unemployment benefits. The trillions of dollars turned over to Wall Street—with the bipartisan support of both Republicans and Democrats—are to be paid for by forcing workers back to work, increasing exploitation and implementing massive cuts to social programs and infrastructure. Even as the death toll rises, the Trump administration is spearheading the drive to force children back to school so their parents can go back to work in unsafe conditions.

The growing movement of the working class must be unified on the basis of a clear socialist and revolutionary program.

The central danger is the subordination of opposition to the Democratic Party. A division of labor exists within the ruling class. The Trump faction is openly trying to create an environment to legitimize vigilante violence. The Democrats, however, speak for another faction of the ruling elite that is no less hostile to the interests of the working class.

For the past four years, the Democrats have worked to channel mass opposition to Trump—which erupted immediately after his inauguration—behind their anti-Russia campaign and the opposition of dominant sections of the military and intelligence apparatus to elements of Trump’s foreign policy. Terrified of and opposed to any movement of the working class against Trump, the Democrats have pursued their conflict with the White House using the methods of palace coup, culminating in the impeachment debacle that ended in February.

In response to the eruption in May of mass protests against police violence following the murder of George Floyd, the Democrats and their political allies have worked to hijack the demonstrations and direct them along racialist lines. The United States, they insist, is not divided between the working class and the oligarchy, but between “white America” and “black America”—a claim that feeds into Trump’s own efforts to develop a fascistic movement based on racism and backwardness.

This has culminated in the nomination by the Democrats of Biden and Harris, the shill for Wall Street and the ex-prosecutor. The Democrats’ election campaign advances no program to address the pandemic or massive social crisis. They are seeking ever more explicitly to divert popular opposition to Trump into a campaign for military operations against Russia and also China. Their orientation is toward the military-intelligence agencies, Wall Street and a section of the Republican Party.

While Trump screams about the specter of socialism, a real socialist movement must be built. The Socialist Equality Party advances a program that meets the needs of the working class, not the corporate and financial elite.

The wealth of the billionaires must be expropriated. The trillions of dollars handed out to Wall Street must be reclaimed and redirected to meeting urgent social needs, including relief for the unemployed, universal health care and an emergency program to stop the coronavirus pandemic. There must be a halt to all evictions. The back-to-work and back-to-school campaigns must be halted, with all workers and parents affected receiving full income until the pandemic is brought under control.

There is not a single social problem that can be resolved without a frontal assault on the capitalist system itself. The coronavirus pandemic, mass unemployment and poverty, the devastating impact of wildfires and hurricanes, the growing danger of world war, and the drive to dictatorship—all make clear the urgent necessity for the development of a conscious political movement for socialism.